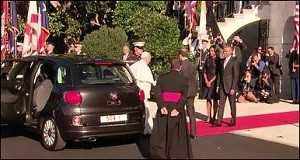 Pope Francis, Who Advocates Against Materialism, Arrives at the White House on September 23, 2015 in a Humble Little Fiat

The Vatican released a lengthy report yesterday on how the drive for accumulating money at any cost has turned Wall Street and much of the global financial system into an “amoral culture,” noting that the idea that markets will be self-policing is pure bunk. The Vatican has apparently decided to keep the debate alive that Senator Bernie Sanders started during the presidential campaign of 2016 when he repeatedly railed against Wall Street for having a “business model of fraud.” The Vatican’s entry into this critical conversation would be much more meaningful if each time it or the Pope lectures the world on the meaning of morality they would acknowledge the Catholic Church’s own moral failings over decades in protecting sexual predators of children, refusing to report the assaults to law enforcement and moving the predators from parish to parish — not all that dissimilar to the private justice system run by Wall Street as predator brokers move from firm to firm. (See our related article on the Pope here.)

That being said, there were some interesting and profound nuggets in both the press conference held by the Vatican to release the report and in the report itself, which was titled: “Considerations for an Ethical Discernment Regarding Some Aspects of the Present Economic-Financial System.” H.E. Msgr. Luis Francisco Ladaria Ferrer, S.J., prefect of the Congregation for the Doctrine of the Faith had this to say at the press conference:

“The purpose of these Considerations is to state clearly that, at the root of the spread of dishonest and predatory financial practices, there are first of all an anthropological myopia and a progressive crisis of the human that have been achieved. Man, today, no longer knowing who he is, and what he is doing in the world, does not even know how to act well, ending up remaining at the mercy of the convenience of the moment and of the interests that dominate the market.

“The profit of the strongest has taken over from the authentic good and has become the real dominant factor in economic and social relations. In this way, the common good has disappeared in many environments from the horizons of living, the conflict of relationships has increased and inequalities have become more pronounced.

“The strongest economic subjects have become Superstars who seize huge amounts of resources, resources that are ever less evenly distributed and increasingly concentrated in the hands of a few. It is incredible even to think that ten people may hold almost half of the world’s wealth: today this fact is now a reality!”

Little of how Wall Street fleeces the public was spared from the Vatican’s report. Likely referring to the 14 to 20 percent interest rates that Wall Street banks are allowed to charge their customers on credit cards, the report said this:

“In this sphere, it is clear that applying excessively high interest rates, really beyond the range of the borrowers of funds, represents a transaction not only ethically illegitimate, but also harmful to the health of the economic system. As always, such practices, along with usurious activities, have been recognized by human conscience as iniquitous and by the economic system as contrary to its good functioning.”

The Vatican’s assessment of the risk of derivatives was equally spot on, calling them “a ticking time bomb.” As for one segment of the derivatives market – the credit default swaps that collapsed the large U.S. insurer AIG in 2008 and required a $185 billion taxpayer bailout of the company because it was the counterparty for these instruments to every major bank on Wall Street – the report had this to say:

“A similar ethical assessment can be also applied for those uses of credit default swap (CDS: they are particular insurance contracts for the risk of bankruptcy) that permit gambling at the risk of the bankruptcy of a third party, even to those who haven’t taken any such risk of credit earlier, and really to repeat such operations on the same event, which is absolutely not consented to by the normal pact or insurance.,

“The market of CDS, in the wake of the economic crisis of 2007, was imposing enough to represent almost the equivalent of the GDP of the entire world. The spread of such a kind of contract without proper limits has encouraged the growth of a finance of chance, and of gambling on the failure of others, which is unacceptable from the ethical point of view.

“In fact, the process of acquiring these instruments, by those who do not have any risk of credit already in existence, creates a unique case in which persons start to nurture interests for the ruin of other economic entities, and can even resolve themselves to do so.”

Dwell on that sentence for a moment or two. Does the Vatican know something that the rest of us don’t yet know? Is there another AIG or Lehman Brothers about to blow up and spread panic and we belatedly learn that the smart money on Wall Street had placed multi-billion dollar credit default swap bets that this would indeed happen?

One suspects that the Vatican may have had the growing state of kleptocracy in the Trump administration in mind when it wrote this passage in the report:

“Economic activity cannot be sustained in the long run where freedom of initiative cannot thrive. It is also obvious today that the freedom enjoyed by the economic stakeholders, if it is understood as absolute in itself, and removed from its intrinsic reference to the true and the good, creates centers of power that incline towards forms of oligarchy and in the end undermine the very efficiency of the economic system.”

Put another way, the perception or reality that the President of the United States is accepting bribes to create outcomes for foreign entities replaces an efficient economic system with perverted, unnatural economic outcomes.

The most cogent passage on the financial system follows below, although it is certainly naïve to believe that “most of its operators are singularly animated by good and right intentions.” That may be true of salaried back office personnel but it is certainly not true of Wall Street “operators” who are incentivized to corruption by a commission structure that rewards predatory behavior and punishes those who put the client first by selling lower-commission products.

“…it is clear that markets, as powerful propellers of the economy, are not capable of governing themselves. In fact, the markets know neither how to make the assumptions that allow their smooth running (social coexistence, honesty, trust, safety and security, laws, and so on) nor how to correct those effects and forces that are harmful to human society (inequality, asymmetries, environmental damage, social insecurity, and fraud).

“Moreover, besides the fact that most of its operators are singularly animated by good and right intentions, it is impossible to ignore the fact that the financial industry, because of its pervasiveness and its inevitable capacity to condition and, in a certain sense, to dominate the real economy today, is a place where selfishness and the abuse of power have an enormous potential to harm the community.

“For this reason, it must be noted that in the economic-financial world there are conditions in which some methods, though not directly unacceptable from an ethical point of view, still constitute instances of proximate immorality, that is, occasions that readily generate the kind of abuse and deception that can damage less advantaged counterparts. For instance, to commercialize certain financial instruments is in itself licit, but in a asymmetrical situation it would be possible to take advantage of a lack of knowledge or of the contractual weakness of either counterpart. In itself this amounts to a violation of due relational propriety, which is already a grave violation from an ethical point of view.

“The complexity of numerous financial products currently renders such asymmetry an inherent element of the system itself and puts the buyers in a position inferior to those who commercialize these products — a situation that from several aspects leads to the surmounting of the traditional principle of caveat emptor. This principle, on the basis of which the responsibility to assess the quality of the good acquired should rest above all with the buyer, in fact presupposes a parity in the capacity to safeguard the proper interests of the contractors. This actually does not exist in many cases both from the evident hierarchical relationship that comes to be established in certain types of contracts (for example, between the lender and the borrower) as well as in the complex structuring of numerous financial instruments.

“Money in itself is a good instrument, as are many other things at the disposal of the human person and is a means to order one’s freedom and to expand one’s possibilities. Nevertheless, the means can easily turn against the person. Likewise, the financial dimension of the business world, focusing business on the access of money through the gateway of the world of stock exchange, is as such something positive. Such a phenomenon, however, today risks accentuating bad financial practices concentrated primarily on speculative transactions of virtual wealth, as well as negotiations of high frequency trading, where the parties accumulate for themselves an excessive quantity of capital and remove the capital from circulation within the real economy.”

The one area that the Vatican doesn’t address is the private justice system that Wall Street operates to shield its serial and insidious crimes from the sunshine of the open court system. Perhaps that’s because this would strike too close to home.