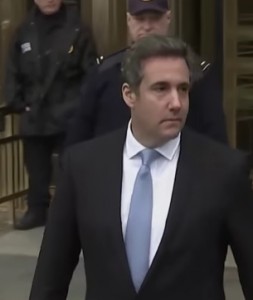 The intrepid investigative reporter, Ronan Farrow, who has a shiny new Pulitzer on his shelf for his investigations into Harvey Weinstein, published an article last night at The New Yorker that should alarm every American. It turns out that it was a law enforcement official who leaked the confidential  government file on Donald Trump’s lawyer Michael Cohen out of concern that someone in the government was making other undisclosed files on Michael Cohen’s funny money transactions involving an additional $3 million disappear.

Cohen established his bank account for Essential Consultants LLC at First Republic Bank – where Trump’s friend of 30 years, Tom Barrack, served on the Board of Directors. Barrack was also Chair of Trump’s Inaugural Committee, under scrutiny itself for funny money doings.

The one SAR located by the law enforcement official and provided to Avenatti revealed that $500,000 came into Cohen’s First Republic Bank account from Columbus Nova, a company tied to the Russian oligarch, Viktor Vekselberg, who is now on a U.S. sanctions list and closely tied to Russian president Vladimir Putin. Another $600,000 came from U.S. telecommunications company AT&T; $1.2 million came from Swiss pharmaceutical company Novartis; and $150,000 came from Korea Aerospace Industries in November 2017, “the same month President Trump visited South Korea” and while “the company was lobbying for a controversial multibillion-dollar contract with the U.S. Air Force,” reports Farrow.

Avenatti has repeatedly stated on MSNBC’s The Beat with Ari Melber that there were a total of three SARs filed by First Republic Bank, not just the one that had been leaked to him. It now has become clear that he learned this from the law enforcement official turned whistleblower. (Law enforcement officials around the country are able to access the FinCEN database in order to effectively investigate crimes involving money laundering.)

According to a document posted to Michael Avenatti’s Twitter page, on April 2 of this year Avenatti wrote to U.S. Treasury Secretary Steve Mnuchin, which is a little like Batman writing to the Joker for assistance. (See our previous reporting on Mnuchin here, here, here and here.) Avenatti asked Mnuchin to do the following:

“…we request that you publicly release the SAR, along with any and all underlying facts, transactions, and documents in your control upon which the SAR is based. To be clear, the source of the funds used to pay the hush money to our client is of critical importance not only to our case, but also involves a matter of great public concern to millions of citizens of the United States. And as Secretary of the Treasury, it is well within your authority to release the requested SAR information to allow the public to learn critical information relating to the payment. Indeed, if the payment was made as innocently as Mr. Cohen has suggested, there should be no objection to the prompt release of the SAR.”

Putting this all in context, Farrow now reveals at The New Yorker that in addition to the one SAR that was leaked to Avenatti showing the AT&T, Novartis, Columbus Nova and Korea Aerospace Industries payments, there are two more SARs showing millions more paid to Cohen from unknown sources. Farrow writes that these two additional and heretofore unseen SAR reports “detail more than three million dollars in additional transactions—triple the amount in the report released last week.” Unfortunately, those two SARs have vanished from the FinCEN database.

“Which individuals or corporations were involved remains a mystery. But, according to the official who leaked the report, these sars were absent from the database maintained by the Treasury Department’s Financial Crimes Enforcement Network, or fincen. The official, who has spent a career in law enforcement, told me, ‘I have never seen something pulled off the system. . . .That system is a safeguard for the bank. It’s a stockpile of information. When something’s not there that should be, I immediately became concerned.’ The official added, ‘That’s why I came forward.’ ”

Making documents disappear to protect powerful interests is actually not something new in the Federal government. In 2011 a Securities and Exchange Commission lawyer, Darcy Flynn, became a whistleblower and told Congressional investigators and the SEC’s Inspector General that for at least 18 years the SEC had been shredding documents and emails related to its investigations — documents that it was required under law to preserve. Flynn told investigators that by purging these files, it impaired the SEC’s ability to see the connections between related frauds.

Matt Taibbi wrote an in-depth article on the Darcy Flynn revelations for RollingStone on August 17, 2011, reporting that by destroying these files “the SEC has kept an entire generation of federal investigators in the dark about past inquiries into insider trading, fraud and market manipulation….” According to Darcy, among the 18,000 files destroyed by the SEC were investigative documents involving people and Wall Street banks that would play a major role in the economic crash of 2008. Those included investigations into the largest Ponzi scheme in history by Bernie Madoff, a 2002 inquiry into financial fraud at Lehman Brothers which set off a wave of financial contagion when it collapsed on September 15, 2008, a 2009 preliminary investigation into insider trading at Goldman Sachs and three cases involving the infamous hedge fund SAC Capital.

Farrow reports that his whistleblower summed up the situation in America today as follows: “This is a terrifying time to be an American, to be in this situation, and to watch all of this unfold.” It’s a far less terrifying time because of people like Ronan Farrow, Michael Avenatti, Darcy Flynn and this law enforcement official.