America Has Reason to Hope: Leslie Cockburn Is Running for Congress 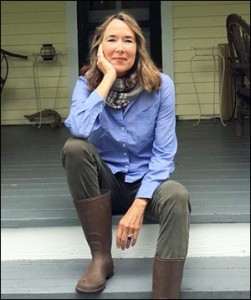 On May 5 Leslie Cockburn, a former prize-winning 60 Minutes producer and journalist with no prior political credentials, won the Democratic nomination for Virginia’s 5th Congressional District. Two qualities sum up how Cockburn has come this far this fast: she is willing to work twice as hard as the average politician and she is sincere in her desire to do the people’s work in what Americans previously called the People’s House – until it became the lapdog of Koch money and corporate interests.

What would have been a major obstacle to most new candidates became an edge for Cockburn. Virginia’s 5th District is huge – it’s larger than New Jersey with 440,000 voters spread across 308 precincts. For a candidate willing to spend 7 days a week traveling the District from end to end, genuinely listening to the concerns of the average voters and reflecting those concerns in her platform, Cockburn has been able to distinguish herself in the minds of voters as an authentic candidate.

Cockburn’s willingness to redefine what it means to be a public servant has apparently rattled her right-wing Republican opponent, Tom Garrett, an incumbent running for his second term in Congress. On Tuesday Garrett lost his Chief of Staff, Jimmy Keady. On Wednesday Politico reported that Garrett was reconsidering running for reelection. On Thursday Garrett admitted to reporters that he had said “I don’t know if I want to do this anymore.” Roll Call released a video excerpt from Garrett’s briefing with reporters yesterday. In a strange, rambling press conference, Garrett mentioned the Sudan, King David, Moses, and Jefferson before stating that he had decided to continue his reelection bid.

Virginia’s 5th District includes Charlottesville where white supremacists, the KKK and neo-Nazis staged a rally on August 12. The rally turned into chaos that ended in the death of a peaceful counter-protester, Heather Heyer, who was mowed down by a car driven by a neo-Nazi. Remarking on the events of the day, President Trump drew broad outrage by remarking that there were “very fine people on both sides.”

Cockburn and her husband of more than 40 years, Andrew, the Washington Editor of Harper’s, have lived on a farm in the rural Virginia county of Rappahannock since 1999. The county is so quaint that it likes to boast that it doesn’t even have a stoplight and has more cows than people.

Cockburn is a graduate of Yale University. Her career in journalism spans 35 years. In addition to producing investigative reports for 60 Minutes, Cockburn has also been a correspondent for PBS “Frontline,” a Ferris Professor of Journalism at Princeton and author. Her work has been recognized with two Emmys, two George Polk Awards, two Columbia Dupont journalism awards, and the Robert F. Kennedy Award. Cockburn’s investigative work has included the financial crash of 2008, nuclear weapons, radical jihad, drug cartels, as well as the wars in Afghanistan, Iraq, Somalia, Colombia, Cambodia and Central America.

Wall Street On Parade first became aware of the Cockburns when they released the incredibly insightful documentary on the Wall Street crash of 2008, American Casino. (See Laura Flanders’ 2009 interview with the Cockburns regarding the documentary below.)  The couple brilliantly put the pieces of Wall Street’s corrupt wealth transfer scheme together for the American people to counter the argument that nobody in Washington could have seen this coming.

In April, writing for Vanity Fair, Cockburn explained what led her to the momentous decision to run for a seat in Congress. She writes that her “conversion had actually begun in October 2016 with the word ‘pussy.’ ”  Cockburn explains that  “Hearing Donald Trump boast of his groping skills had filled me with revulsion. This was Silvio Berlusconi, American style: vulgar, reckless, tawdry, misogynistic.”

Cockburn adds that she realized that the Trump administration “was busy shredding the institutions that permitted dissent. And once the damage was done, it would be hard to repair.” Cockburn’s travels with news crews around the globe have obviously led her to understand that there are “plenty of governments around the world, run by oligarchs and kleptocrats.” Instinctively she knows that the same thing could happen here – unless sincere Americans reclaim their government in Washington.