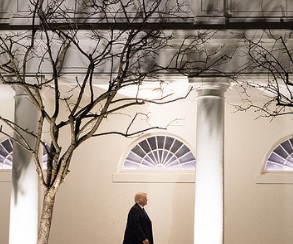 It’s increasingly looking like President Trump vetted his tax cut plan about as thoroughly as he vetted his cabinets picks. That is likely to have a serious negative impact on U.S. economic growth, the housing market and consumer spending.

Yesterday Trump’s pick to head the Veterans Affairs Administration withdrew his name from consideration after allegations of drinking on the job and wrecking a government car while drunk surfaced in statements made by two dozen of his current and former colleagues. Later in the day, Trump’s Senate-confirmed head of the Environmental Protection Agency, Scott Pruitt, was being grilled at two separate House hearings on his wasteful spending of taxpayer dollars for first class travel to Italy and Morocco, a $43,000 soundproof phone booth for his office despite the agency already having secure facilities, and for accepting a dramatically below-market rate of $50 per night for a condo from the wife of an energy lobbyist who had business before the EPA.

Those scandals simply add to a growing list of high-profile flameouts of Trump’s poorly vetted picks. National Security Adviser Michael Flynn lasted just 25 days in the job over his communications with Russia during the Trump transition. He has since pleaded guilty to lying to the FBI. Tom Price, Trump’s pick to head Health and Human Services, resigned after reports surfaced that he had used private planes for travel that cost taxpayers hundreds of thousands of dollars. Then there was Brenda Fitzgerald, Trump’s pick for Director of the CDC (Centers for Disease Control and Prevention). Fitzgerald resigned following a Politico article revealing she had purchased tobacco stock after taking her post. And we can’t forget the resignation of Rob Porter, who was allowed to continue his job as White House Staff Secretary to the President for more than a year, despite being denied proper security clearance.  His resignation came after two ex-wives went public with allegations of physical abuse.

Shoving people into positions of power at Federal agencies that were created to protect the public interest based on little more than Trump’s gut instinct that his picks will show him the requisite personal loyalty that he demands is undermining the Federal government’s ability to do its job. And now, on top of all this, the poorly vetted tax cuts are exploding the Federal government’s deficit and pushing up interest rates. That’s a dangerous cocktail for a nation already in deep debt.

Treasury Secretary Steve Mnuchin, a 17-year veteran of Goldman Sachs and a foreclosure king during the financial crisis who had his own issues at his Senate Confirmation hearing, has promised that the sweeping tax cuts would pay for themselves by boosting economic growth. That prospect is growing more suspect with each passing day.

On May 3, 2017, the bipartisan congressional watchdog, the General Accountability Office (GAO), issued an in-depth report on the U.S. government’s fiscal outlook. It found the following:

“While health care spending is a key programmatic and policy driver of the long-term outlook on the spending side of the budget, eventually, spending on net interest becomes the largest category of spending in both the 2016 Financial Report’s long-term fiscal projections and GAO’s simulations.”

Another GAO concern is the fact that federal resources that could be deployed into key priorities like rebuilding the nation’s roads and bridges are being diverted to interest on debt. And that is going to become more challenging than ever over the next few years because of the concentration of Federal debt that is coming due by 2020. The GAO study states that 58 percent of Treasury securities held by the public will be maturing over the next four years.

Rolling over that debt into a higher interest rate market is the last thing a Treasury Secretary should want to do. But that’s what happening. The benchmark 10-year U.S. Treasury Note has moved from a yield of 2.06 percent on November 9, 2016 to a yield of a tad over 3 percent earlier this week. Mortgage rates correlate to the 10-year Treasury and have moved up significantly since September of last year. That makes it more difficult for homebuyers to qualify for a mortgage. A slowdown in home sales impacts consumer spending on durable goods like washers, dryers, refrigerators and household furnishings like drapes, carpets and furniture.

Currently, the gross Federal debt is $21.1 trillion. According to a study released this month by the Congressional Budget Office (CBO), the annual Federal budget deficit is projected to cross the $1 trillion mark by 2020, in part because of the tax cuts. That means the U.S. Treasury will be bringing ever increasing amounts of Treasury debt to market and that supply is likely to put even more upward pressure on interest rates – further constraining fiscal spending as more and more Federal resources go to pay interest on the national debt.

That mushrooming supply is coming at a time of contracting demand. The Federal Reserve is in the process of scaling back its purchases of U.S. Treasuries in order to “normalize” its balance sheet from its Quantitative Easing (QE) days when it was accumulating over $3 trillion of Treasuries and mortgage debt to keep rates low and boost the economy during the aftermath of the financial crash of 2008. The Fed’s first trimming of its purchases came in October of last year with the Fed shrinking the amount of maturing Treasury principal it was rolling over into new Treasuries by $6 billion a month. The shrinkage amount will grow gradually until October of this year when the Fed will roll over $30 billion less each month in Treasuries going forward than it had in prior years. (The Fed also acquired large holdings in mortgage-backed securities during the financial crisis and it is trimming its rollover of maturing principal in those as well.)

On top of the normal market reaction to push up interest rates in the face of growing supply, the Federal Reserve is also signaling that it is likely to hike short rates further this year.

Just like a thorough vetting of cabinet nominees could have foreseen the scandals that later emerged, a thorough vetting and review process for the monster tax cut legislation would have cautioned against such radical moves in the face of massive maturing supply, a trimming Fed, and a debt-strapped consumer that is  seeing higher interest rates on mortgages and credit cards as a result of the spike in rates.