Stockman: $1.8 Trillion in New Treasury Debt Will Hit Bond Pits “Like a Tornado” 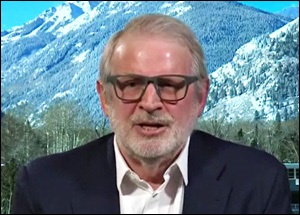 Investors have been whiplashed so far this week and it’s only Wednesday morning. On Monday, the Dow rocketed ahead by 399 points. On Tuesday, it plunged by 299 points. What changed investor sentiment so dramatically in 24 hours?

David Stockman, the former Director of the Office of Management and Budget under President Ronald Reagan who blogs at Contra Corner, appeared on CNBC yesterday to size up the situation. Commenting on the new Chairman of the Federal Reserve, Jerome Powell, who gave testimony for the first time in his new role before the House Financial Services Committee yesterday, Stockman said he thinks Powell is “missing three giant skunks sitting on the wood pile.”

The biggest skunk according to Stockman is an “epic monetary fiscal collision” that Stockman says he hasn’t seen before in his lifetime. Stockman explained that starting this October, which begins the Federal government’s Fiscal 2019,  the government is going to borrow $1.2 trillion. Stockman called this “an astronomical number” given that the U.S. is ten years into an expansion. (Borrowing of that magnitude has traditionally been done only during a deep recession.)

At the same time says Stockman, the Federal Reserve has pivoted to Quantitative Tightening (QT) “and they will be dumping $600 billion” of their bonds into the market at the same time as the government is pumping up debt issuance. (The Federal Reserve began trimming back its purchases of Treasury bonds in October of last year in order to normalize its bloated balance sheet that resulted from the financial crisis. That trimming, which is an effective tightening of monetary policy, will expand this year.

The Fed’s $600 billion combined with the $1.2 trillion from the government means that $1.8 trillion in Treasuries “will be looking for a home” in Fiscal 2019 said Stockman. This leads Stockman to believe that the market simply can’t clear all of this debt at anywhere near the 2.90 percent interest rate at which the 10-year U.S. Treasury has been trading. He says there is going to be a “monumental yield shock” that will take 10-year Treasury yields to 3 to 4 percent “and probably overshoot beyond that.”

Another big skunk explains Stockman is that there will not be the help coming from other central banks around the world as there has been in the past decade. They’re also in wind-down mode.

In his House testimony yesterday, Powell rattled markets by using the words “robust” to describe the job market and “more stimulative” to describe fiscal policy. He also said that “wages should increase at a faster pace.” The full context was as follows in his written testimony:

“The robust job market should continue to support growth in household incomes and consumer spending, solid economic growth among our trading partners should lead to further gains in U.S. exports, and upbeat business sentiment and strong sales growth will likely continue to boost business investment. Moreover, fiscal policy is becoming more stimulative. In this environment, we anticipate that inflation on a 12-month basis will move up this year and stabilize around the FOMC’s 2 percent objective over the medium term.

“Wages should increase at a faster pace as well. The Committee views the near-term risks to the economic outlook as roughly balanced but will continue to monitor inflation developments closely.”

All of this happy chatter was anathema to the stock market which interpreted it to mean that the Fed will be moving ahead with rate hikes sooner rather than later. Higher rates on Treasury notes and bonds spell competition for the low dividend yield on quality stocks.

The bottom line here is that the future of the stock market rests in the hands of the bond market.