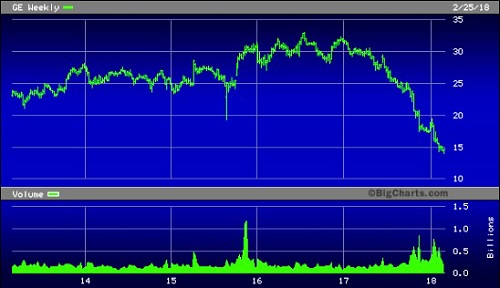 MarketWatch’s Tomi Kilgore reported on February 13, 2018 that JPMorgan analyst Stephen Tusa “became even more bearish” on General Electric (which has been a component of the Dow Jones Industrial Average since its creation in 1896). Kilgore reports further that the JPMorgan analyst had “slashed his stock price target to $14” from his previous target of $16. Only Deutsche Bank’s stock analyst, John Inch, says Kilgore, has a lower target, at $13.

JPMorgan, along with all of the other major Wall Street firms, is still allowed to issue research ratings on stocks despite the firms being charged by the Securities and Exchange Commission in 2003 in the epic research scandal on Wall Street.

Yesterday morning, as the Dow was on its way to closing up a whopping 399 points, GE plunged to a nickel below the JPMorgan analyst’s prediction, touching an intraday low of $13.95.

JPMorgan knows a lot about GE because it was part of a syndicate of Wall Street banks that raised $8.7 billion for GE just last May in a Euro bond. Other Wall Street firms in the syndicate included Bank of America Merrill Lynch, Citigroup, Deutsche Bank and others.

In addition to being able to issue analyst stock ratings on GE and dozens of other companies and significantly benefit financially from debt underwritings that bury a company deeper and deeper under debt, these same Wall Street firms are permitted to trade shares of GE (and hundreds of other stocks) in their own internal Dark Pools – effectively unregulated stock exchanges inside the firms.

According to the slim amount of Dark Pool data that is released three weeks after the fact by Wall Street’s self regulator, FINRA, both JPMorgan and Deutsche Bank, the firms with the low-price targets on GE, have been actively trading GE stock in their Dark Pools.

But we don’t know if all of that volume at UBS and Credit Suisse actually originated at their own firms. According to the Rule 606 form filed by JPMorgan with the SEC for the fourth quarter of 2017 (the most recent data available), it is routing almost as much trading to itself as it is to UBS and Credit Suisse. The data shows that for New York Stock Exchange listed shares, it sent 9.44 percent of those shares to itself; 6.44 percent to UBS; and 5.74 percent to Credit Suisse. The New York Stock Exchange only received 4.61 percent of JPMorgan’s trades with the balance distributed to myriad other venues.

Did the shares of GE that were re-routed by JPMorgan to UBS and Credit Suisse end up in the Dark Pools of those firms? We can’t say. But we can ask one critical question: why would JPMorgan send trades to its two competitors instead of to the regulated New York Stock Exchange?