Have You Heard of Goldman Sachs’ Theory Called the “Balanced Bear”? 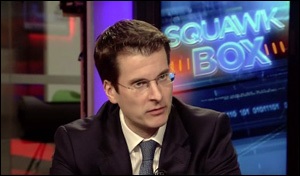 Last Friday, Christian Mueller-Glissmann, an equity strategist at Goldman Sachs, took to the airwaves at CNBC to discuss last week’s market selloff and entered a new phrase into the lexicon of investing. Mueller-Glissmann said: “The way this market has traded in this correction has been very much in line with our thesis from last year which was called the ‘Balanced Bear.’ You might remember this – this idea that equities and bonds can sell off together.”

If there’s nowhere to hide, we’d like to suggest that the new paradigm should be called the ‘Naked Bear’ rather than the ‘Balanced Bear.’

Historically, if the stock market is selling off sharply, money is moving into U.S. Treasury notes as a safe-haven play. That drives up the price of the notes which drives down their current yield. (The market expression for this is that yields move inversely to note and bond prices.) Likewise, if the stock market is rallying sharply, money should be moving out of Treasuries into stocks.

Now, obviously, retail investors are not making quick trades like this intraday in the stock and bond markets. We’re talking about hedge funds, institutional traders and the big trading desks on Wall Street that move at lightening speed from one asset class to another.

Lately, however, normal market behavior has been replaced by weird trading action, leading to a lot of speculation that the market is broken or rigged. Take yesterday for example. The Consumer Price Index (CPI) was released in the morning showing a higher than expected 0.5 percent increase. The 10-year Treasury price sold off, meaning its yield moved higher in anticipation that the Federal Reserve would interpret the higher inflation data as a sign it needed to move more quickly with rate hikes. In a normally functioning market, that should have been enough to send the stock market plunging which would, in turn, dampen the upward move in the 10-year Treasury yield as money moved into it as a safe haven play. But just the opposite happened. The Dow Jones Industrial Average closed with a gain of 253 points while simultaneously the yield on the 10-year Treasury spiked to trade intraday at 2.919 percent, hitting a four-year high.

One market that did behave as it should yesterday was gold. U.S. gold futures for April delivery rose 2.1 percent to $1,358. Gold is perceived as a hedge against inflation.

The aberrations in the markets are likely rooted in the aberrations of the Trump administration’s economic policies. And, let’s not forget that the immediate past President of Goldman Sachs, Gary Cohn, is Trump’s Director of the National Economic Council. At a time when the economy is in a growth mode, the Trump administration is planning on massive deficit spending rather than saving that maneuver for a period of recession when it’s critically needed. And at a time when the national debt is already an albatross around the nation’s economic neck at $20.6 trillion, Trump pushed through a tax cut that will add more than a trillion dollars to the debt load over a decade and increase the issuance of Treasuries at a time when the Federal Reserve is scaling back its purchases of Treasuries in order to normalize its balance sheet from the monster holdings it acquired to stem the financial crisis following the 2008 crash.

Gary Cohn’s former boss at Goldman, Lloyd Blankfein, who remains in the positions of Chairman and CEO at Goldman, voiced concerns about the situation in an appearance yesterday with Christine Romans of CNN. Blankfein said:

“I’m in the world of contingency planning for risks. And I would say that the odds of a bad outcome have gone up. I wouldn’t say that’s my case. That’s not my best case. But the idea that the Fed is behind – don’t forget, all these deficits have to be paid for, so there’s going to be more Treasuries that are going to be issued and they have a competitor, the central bank, which has to get rid of its inventory of Treasuries and they’re going to sell into the same kind of market to the same investors…”

Romans asked Blankfein what he’d say, not to bankers but to regular Americans who are watching the stock market. Blankfein responded:

“At this particular time I would say ‘don’t throw all in.’ People are saying, gosh, you should buy more at the lows. Yes, if you’re rich and you have a lot of excess capital. But I wouldn’t throw all in. I’d be planning for the contingency that this turns out to be a worse time than people are thinking. I wouldn’t be more audacious today with the Fed on a raising rates, with the withdrawal of QE, with the budget deficit widening out. I wouldn’t say this is the time I would max out on my risk as opposed to a year ago.”

We know from the financial crisis-era congressional hearings that occurred concerning Wall Street banks shorting subprime debt for their own accounts while selling it long to their own customers that when Goldman Sachs is worried it tells its own traders to “get closer to home,” code for paring back risk to protect Goldman Sachs while dumping it on the nearest dumb tourist-like investors. (See our 2010 article: Why A Criminal Case Against Goldman Sachs Matters and Why Charges Could Stick.)

Unfortunately, it’s likely we’ll have to wait for a new administration in Washington and the next round of crisis-era congressional hearings to find out just how close to home Goldman Sachs got this time around.