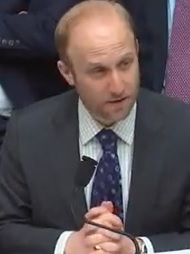 On February 14, the week after the Dow Jones Industrial Average experienced two separate days of more than 1,000-point losses, the House Financial Services’ Subcommittee on Capital Markets, Securities and Investment convened a hearing to discuss various legislative proposals to return to the wild west era of derivatives trading on Wall Street. (Many, including Wall Street On Parade, believe that we’ve never left that era – the risks have simply been hidden behind a dark curtain. See related articles below.)

One lonely voice for sanity on the witness panel, which was stacked with industry trade groups, was Andy Green, Managing Director at the Economic Policy Center for American Progress. Green’s written testimony stated that the legislative proposals “slice, dice, or otherwise poke holes – sometimes large holes – in the firewalls placed in the derivatives markets by post 2008 reforms….”

Green also reminded the Congressional members present that the “unregulated OTC derivatives market was at the heart of the 2007-2008 financial crisis, which cost 8.7 million Americans their jobs, 10 million families their homes, and eliminated 49 percent of the average middle-class family’s wealth compared with 2001 levels.”

Green provided a litany of the derivative horrors that led to panic and financial contagion during the financial crisis. The collapse of the giant insurer AIG from credit default swap derivatives and its role as counterparty to some of Wall Street’s largest banks. (In response to the AIG collapse, the U.S. government bailed out the company to the tune of $185 billion. Half of the bailout money effectively went in the front door of AIG and then out the backdoor to the big Wall Street banks and hedge funds that had used AIG as their counterparty to guarantee their bets on Credit Default Swaps.)

Also noted by Green was Lehman Brothers’ “disorderly failure” which “was exacerbated due to the company’s extensive OTC derivatives portfolio.” Green reminded attendees that Lehman “had around 930,000 OTC derivatives contracts at the time of its failure.”

Green then delved back a little further in time: there was the blow-up of the hedge fund Long Term Capital Management in 1998. The firm had $4 billion of net assets but had “used OTC derivatives to increase its total leverage exposure to $1 trillion.” That required the New York Fed to strong arm major Wall Street banks, who were counterparties to the derivatives, to bail it out.

Then, of course, there was Enron, which in 2001 filed the largest bankruptcy in U.S. history up to that time. Green says Enron’s “unregulated energy derivatives were at the center of Enron’s collapse” and it “used OTC derivatives to hide debt, to hide losses, and to speculate.”

What Green mentions only tangentially in his written testimony is that four years after Wall Street had exploded itself with wild derivative gambles, and two years after the Dodd-Frank financial reform legislation was passed in 2010, Wall Street’s largest bank was still unrepentant. In 2012 JPMorgan Chase was caught gambling in exotic derivatives in London in a scandal that became known as the “London Whale.” The bank eventually had to own up to using its bank depositors’ money for hundreds of billions of dollars in derivatives trades while losing a stunning $6.2 billion in the process.

In 2015, the U.S. Treasury’s Office of Financial Research released a report written by Jill Cetina, John McDonough, and Sriram Rajan, which revealed that JPMorgan’s London Whale trades were actually a capital relief trade – an effort to gin up its capital through derivatives. The report stated:

“JPMorgan Chase & Co.’s losses in the 2012 London Whale case were the result of CDS [Credit Default Swap] usage which was undertaken to obtain regulatory capital relief on positions in the trading book.”

Green sums up his pitch against further deregulation of derivatives as follows:

“Rent-seeking behavior” is a more polite phrasing of what Senator Bernie Sanders says is a Wall Street business model of fraud.