Trump: “Defining Deviancy Down” With Lots of Takers 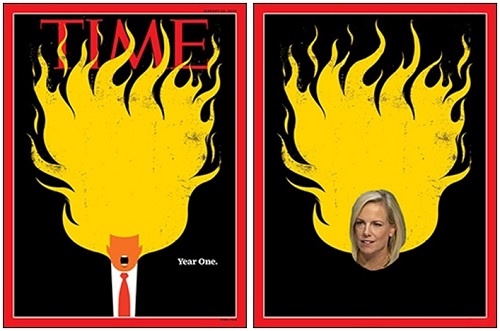 Time Magazine Memorializes “Year One” of the Trump Presidency (left). Kirstjen Nielsen (right), Secretary of Homeland Security Appears Under Oath Before Senate Judiciary Committee on January 16, 2018 and Has Amnesia on Trump’s “Sh**hole” Characterization of African Countries.

If you are raising children, caring for aging parents, working multiple jobs to pay the mortgage or simply spending your free time protesting the policies of the current administration, you may have missed the latest series of scandals swirling around the so-called leader of the free world.

Yesterday, another gag order was reported, this time coming from the White House. According to Adam Schiff, a member of the House Intelligence Committee that is investigating possible Russian collusion with the Trump transition team in the 2016 election, Steve Bannon, the fired Trump strategist, refused to answer questions yesterday before the Committee under a subpoena because the White House told him it would infringe on the President’s right to Executive Privilege. Bannon, however, used this defense in not only refusing to answer questions about his time at the White House but also during his time on the transition team prior to Trump’s inauguration — when the Executive in the White House was Barack Obama. Legal scholars have insisted that only one person can claim Executive Privilege at a time and that’s the person occupying the Oval Office. The New York Times reported yesterday that Bannon has also received a subpoena from Special Counsel Robert Mueller to testify before a grand jury.

Also yesterday, the nonprofit watchdog, Public Citizen, released a report titled “Presidency for Sale,” documenting 64 instances in which Trump’s “sprawling set of businesses has resulted in a unique set of conflicts that previously were unimaginable for the president of the United States.” Robert Weissman, Public Citizen’s president stated: “Business is booming at the Trump International Hotel in D.C., not because of the décor, but because corporations and foreign governments want to curry favor with the president.”

But perhaps the most deviant event so far this week is how far the President of the United States will go to get others to do his bidding – even when it involves lying under oath to Congress. Yesterday, Trump’s Secretary of Homeland Security, Kirstjen Nielsen, denied hearing Trump call African nations “sh**hole countries” during a meeting in the Oval Office last Thursday to discuss immigration reform. She made this denial while testifying under oath before the U.S. Senate Judiciary Committee. Under a normal Congress and normal administration, lying under oath to Congress would be a career-ender with the potential for perjury charges and yet Nielsen casually gave her tainted testimony multiple times and at one point arrogantly blurted out that she was done answering questions on this topic.

Given the small number of people in attendance at the Oval Office meeting (approximately 12), it would have been next to impossible for Nielsen not to have heard the shocking word from Trump. The language has been acknowledged by a Republican in attendance at the meeting, Senator Lindsey Graham, and Democrat Dick Durbin, also in attendance. Not only did Graham hear the language but he lectured the President on it during the meeting according to a formal statement he released. Nielsen characterized the Graham lecture to the President yesterday as Graham using “cuss” words in the meeting, rather than simply repeating the words that had come out of the President’s mouth in a rebuke of him.

To most rational thinkers, it would be next to impossible for Nielsen to have heard Graham lecture the President on the use of the word and the President to have used the word first and her have no memory of either happening just five days later. An exasperated Senator Cory Booker blasted Nielsen at yesterday’s hearing, stating “Your silence and amnesia is complicity.”

Also apparently willing to lie for the President are two Republican Senators who attended the meeting: Sens. Tom Cotton of Arkansas and David Purdue of Georgia. In a joint statement initially released, the two said they had no memory of the President using the word. After the news of the President’s slur against African nations spread widely, the two Senators changed their story to say it didn’t happen. Trump Tweeted: “The language used by me at the DACA meeting was tough, but this was not the language used.”

Media news is saturated with the Trump scandal-du-jour, leaving little room for covering and investigating two critical areas in desperate need of reform, Wall Street and the Federal Reserve, before the crony duo crash the U.S. financial system again. If Americans continue to allow Trump to define deviancy down, we will be left with a shriveled democracy that may not find its way back to moral ground and an economy run by oligarchs. Don’t say it can’t happen here. It is happening.