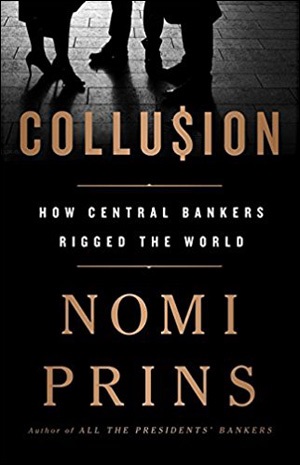 Nomi Prins’ latest book, Collusion: How Central Bankers Rigged the World, ensures her place as one of this century’s most informed Wall Street historians. It’s the perfect segue from Prins’ earlier “It Takes a Pillage,” and her 2014 book All the Presidents’ Bankers. If you are serious about understanding the corrupting influences that have left the U.S. vulnerable to another epic financial crash, buy all three books and read them as one.

Prins is a veteran of Wall Street who has now written six books and dozens of articles to help Americans navigate the snake pit that has replaced the financial system of the United States. It all started with her first book in 2004, Other People’s Money: The Corporate Mugging of America, where she explained her motivation as follows:

“When I left Wall Street, at the height of a wave of scandals uncovering scores of massively destructive deceptions, my choice was based on a very personal sense of right and wrong…So, when people who didn’t know me very well asked me why I left the banking industry after a fifteen-year climb up the corporate ladder, I answered, ‘Goldman Sachs.’

“For it was not until I reached the inner sanctum of this autocratic and hypocritical organization – one too conceited to have its name or logo visible from the sidewalk of its 85 Broad Street headquarters [now relocated to 200 West Street] that I realized I had to get out…The fact that my decision coincided with corporate malfeasance of epic proportions made me realize that it was far more important to use my knowledge to be part of the solution than to continue being part of the problem.”

In Collusion, Prins walks us through the critically-important events occurring during the 2007-2009 financial crash, many of which would have been relegated to the dust bin of history if not for this book. Prins makes the case that the U.S. is headed toward another epic financial crash as a result of the unchecked powers of the U.S. central bank (the Federal Reserve) and its global counterparts who are creating dangerous new asset bubbles in an effort to paper over the last ones.

Prins convincingly shows that colluding central bankers have effectively become the markets through a never-ending flow of cheap money to the mega banks which have deployed that cheap money to buy back and inflate their own stock – with a green light from their own regulator and money pimp (our term, not hers) – the U.S. Federal Reserve.

Prins correctly points out that what these central banks are doing is providing artificial stimulus to markets – the opposite of what free markets are all about.

The 2007-2009 financial crash was equivalent to a financial World War and the Fed’s emergency money-pumping measures, justified by it as essential to saving the system until it repaired itself, have become instead an opioid-like addiction within U.S. and global markets according to Prins. After failing miserably as a regulator of the biggest Wall Street banks and allowing banks holding insured deposits to be housed under the same roof with casino-like investment banks, the Fed has now effectively become a cheap-money drug dealer to Wall Street and the markets.

One reference in the advance reading copy for Collusion (which will hopefully also make it into the final hardcopy which is set for release on May 1) is to the fact that the former Fed Chairman, Ben Bernanke (who had the audacity to title his memoir The Courage to Act) received an unprecedented 30 negative votes during his Senate re-confirmation hearing to serve a second term as Fed Chairman. That was in 2010 and Prins reminds us that it was Senator Bernie Sanders who led the charge to expose the elitist tendencies of the Fed and Bernanke.

Sanders, long before he ran in the Democratic primary for President, pushed the issue of a lack of transparency at the Fed. In a January 27, 2010 editorial in USA Today, Sanders wrote:

“The immediate cause of this economic disaster is the greed, recklessness and illegal behavior of the largest financial institutions in the country. One of the major functions of the Federal Reserve is to protect the safety and soundness of our financial institutions and to oversee their actions. It is clear to almost everyone that Chairman Bernanke was asleep at the switch while Wall Street became the largest gambling casino in the history of the world and hurtled into insolvency. His failure to adequately regulate financial institutions should not be rewarded with a reappointment.

“As part of the huge taxpayer bailout of Wall Street, the Fed provided trillions of dollars in virtually zero-interest loans to large financial institutions. Bernanke consistently has refused to provide the transparency needed so that the American people can learn which banks received those loans. Our democracy cannot tolerate this kind of secrecy. We need a new Fed chairman who believes in transparency.”

Sanders pursued the matter further and was able to attach an amendment to the Dodd-Frank financial reform legislation which forced the Fed to disclose that it had made an astounding $16 trillion cumulatively in almost zero-interest loans to the largest Wall Street banks and their foreign counterparts from 2007 through the middle of 2010. The banks which received the bulk of this largess were simultaneously charging struggling consumers over 20 percent interest on credit cards – courtesy of the Federal Reserve. (See video below.)

Sanders may have been a little too kind to Bernanke. Wall Street On Parade’s research suggests that Bernanke was not so much “asleep at the switch” as he was actively engaged in the plot to bail out Wall Street and keep it a secret from the American people. In 2014 we reported that the details of 84 secret meetings held by Bernanke in the lead up to the Wall Street collapse remained redacted on his appointment calendars more than five years after the crash.

Hopefully, Prins’ latest work will galvanize lawmakers to get serious about reforming both the dangerous Fed and restoring some semblance of free markets to the United States.