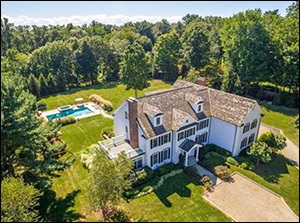 Former FBI Director James Comey’s Westport, Connecticut Mansion When He Worked for a Hedge Fund from 2010-2013

The former FBI Director, James Comey, is set to release his new book, A Higher Loyalty: Truth, Lies, and Leadership on May 1. It is anticipated that it will provide titillating details from his career in public service, notably his career as FBI Director that ended abruptly on May 9 of last year when Comey was fired by President Donald Trump in the midst of an FBI probe into Trump campaign ties to Russia.

A three-year span that is not likely to make it into Comey’s book is the time he spent as General Counsel of Bridgewater Associates, immediately preceding his nomination by President  Obama in 2013 to be FBI Director.

Bridgewater Associates is the weirdly managed hedge fund that promotes “radical truth and radical transparency.” The firm has become notorious for videotaping all of its internal meetings, including at least one that bordered on character assassination of a colleague. The firm also admits to assigning “homework” to employees that requires them to review and analyze recordings of employee interactions.

In 2016 and 2017, the New York Times published a series of articles about the controversial culture of Bridgewater, noting that “as many as a third of the 1,500 employees leave within two years of being hired.” A 2016 article detailed an employee complaint filed with the Connecticut Commission on Human Rights and Opportunities, which described “an atmosphere of constant surveillance by video and recordings of all meetings — and the presence of patrolling security guards — that silence employees who do not fit the Bridgewater mold.”

Comey will likely be barred from discussing his days at the firm that has contributed significantly to making him a multi-millionaire due to attorney-client privilege as well as confidentiality and non-disparagement agreements that employees are required to sign in order to work at Bridgewater Associates – one of the largest hedge funds in the world.

Also not likely to be included in his published memoirs are photos of the lavish estate he owned while working at Bridgewater. According to public records, Comey and his wife, Patrice, bought the Westport, Connecticut estate on August 5, 2010 for $3,050,000.  A Zillow listing shows the mansion contains seven bedrooms, nine baths, 7,157 square feet of living space, a wine cellar and is located on 3.17 acres.

Comey continued to own the mansion during his years as FBI Director. According to public records, a limited liability company, Soundview Property Associates LLC sold the property on January 17, 2017 for $2,475,000.