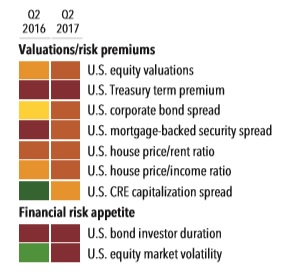 During Fed Chair Janet Yellen’s press conference on December 13, she had this to say about financial stability on Wall Street: “And I think when we look at other indicators of financial stability risks, there’s nothing flashing red there or possibly even orange. We have a much more resilient, stronger banking system, and we’re not seeing some worrisome buildup in leverage or credit growth at excessive levels.”

Where does Fed Chair Janet Yellen get her information on financial stability risks to the U.S. financial system? A key source for that information is the Office of Financial Research (OFR), a Federal agency created under the Dodd-Frank financial reform legislation of 2010 to keep key government regulators like the Federal Reserve informed on mounting risks.

On December 5, the OFR released its Annual Report for 2017. It was not nearly as sanguine as Yellen. In fact, it flatly contradicted some of her assertions. The report noted that numerous areas were, literally, flashing red and orange (OFR uses a color-coded warning system) – raising the question as to why Yellen would attempt to downplay those risks to the American people.

Market risk is in the red zone. The report notes the following:

“Market risks from a sharp change in the prices of assets in financial markets are high and rising.

“Rising prices and falling risk premiums may leave some markets vulnerable to big changes. Risk premiums are returns in excess of returns on risk-free investments.

“Such market corrections can trigger financial instability when the assets are held by entities that have excessive leverage and rely on short-term debt and other liabilities.

“Each of our annual reports has highlighted the risk that low volatility in market prices and persistently low interest rates may promote excessive risk-taking by investors and create future vulnerabilities. In 2017, strong earnings growth, steady economic growth, and increased expectations for a U.S. fiscal policy that stimulates economic growth have fueled the rise in asset prices.

“Stock market valuations are at historic highs, according to several metrics.

“Prices are also elevated in bond markets, suppressing yields. Risk premiums for corporate bonds have nearly fallen to the lowest point since the financial crisis. At the same time, long-term interest rates in the United States remain low, despite a long span of steady economic growth, low unemployment, and gradual increases in benchmark interest rates by the Federal Reserve.

“The low rates have increased the risk of loss by bond investors if interest rates rise, but two factors mitigate the potential systemic risk from rising rates. First, investors such as pension funds and insurance companies have long-term liabilities, including pension obligations and life insurance coverage that allow them to tolerate any short-term market losses on bonds. Second, the Federal Reserve has clearly stated its intention to raise interest rates gradually…

“Nonfinancial corporate debt continues to grow, although at a slower pace than in 2016. Measures of firms’ debt-to-assets and debt-to-earnings ratios are red on the monitor heat map.”

“Some measures of credit risk have moderated since last year, reflecting crosscurrents of positive and negative developments. Credit risk from debt by nonfinancial corporations remains elevated. Nonfinancial corporate debt continues to grow, although at a slower pace than in 2016. Measures of firms’ debt-to-assets and debt-to-earnings ratios are red on the monitor heat map.

“In addition, the quality of covenants may be weakening. Covenants are terms in financial contracts meant to protect investors. For example, covenants may limit a borrower’s total debt or restrict business activities. Weaker covenants historically accompany buildups of debt and may signal lower credit quality.”

U.S. debt to GDP is now in the red zone. The report describes the situation as follows:

“U.S. government debt as a percent of gross domestic product (GDP) is at its highest level in decades. Very low interest rates are currently mitigating this vulnerability because they make debt more affordable.”

The Federal Reserve did not see the epic financial crash of 2008 coming. Despite that, it was given increased banking regulation powers under Dodd-Frank and now oversees the largest Wall Street bank holding companies in the U.S. -– in addition to functioning as the U.S. central bank in charge of monetary policy. (Failing up seems to be the new political and business model in the U.S.) The Fed Chair further undermines her institution when she window dresses the very real threat that Wall Street banks continue to pose to the U.S. economy.