Trump, the Chaos President, Adds Cruelty to His Brand

Donald Trump, the President of the United States, who took his companies through bankruptcy six times, picked the three-week anniversary of Hurricane Maria delivering an epic humanitarian crisis to Puerto Rico to shame the U.S. territory for its financial troubles and to traumatize the struggling residents by suggesting he may yank Federal workers from Puerto Rico.

The President, whose key job is to rally people in the time of crisis, posted the following, insanely cruel Tweet yesterday to a region where 84 percent of the residents still lack electrical power; one-third lack clean running water; and only 8 percent of the roads are passable according to government statistics: “We cannot keep FEMA, the Military & First Responders, who have been amazing (under the most difficult circumstances) in P.R. forever!” Trump posted to his Twitter page. That post came shortly after Trump retweeted a statement suggesting that Puerto Rico’s “financial crisis looms largely from their own making.”

The three-week time frame for Trump’s patience to be running out in the midst of a humanitarian crisis contrasts with the three-year time frame, from 2007 to 2010, in which the Federal government’s patience and money were lavished on Wall Street to the tune of $16 trillion. Wall Street’s crisis was not the product of Mother Nature but a thundering herd of greed-obsessed banksters hell bent on looting the investing public and the public purse. (See Puerto Rico Relief Efforts Pale to that for Just One Wall Street Bank.)

Trump’s most recent tone deaf remarks on Puerto Rico follow those he made while visiting the Island on October 3, when he said the situation in Puerto Rico isn’t “a real catastrophe” like that of Hurricane Katrina in New Orleans and actually blamed Puerto Rico for “throwing our budget a little out of whack.”

Just two weeks after Hurricane Maria made landfall in Puerto Rico as a Category 4 hurricane with sustained winds of 155 miles per hour, President Trump Tweeted that “They want everything to be done for them…” while lavishing praise on “10,000 Federal workers” who he said are “doing a fantastic job.”

President Trump’s cruel and cold-hearted remarks toward Puerto Rico stand in contrast to his Tweets regarding hurricane damage in Texas and Louisiana. In a Tweet on August 30, Trump reassured the residents of those two states that “We are w/ you today, we are w/ you tomorrow, & we will be w/ you EVERY SINGLE DAY AFTER, to restore, recover & REBUILD!”

Both Texas and Louisiana went for Trump in the 2016 Presidential election. Residents of Puerto Rico, a territory not a state, cannot vote in U.S. elections. 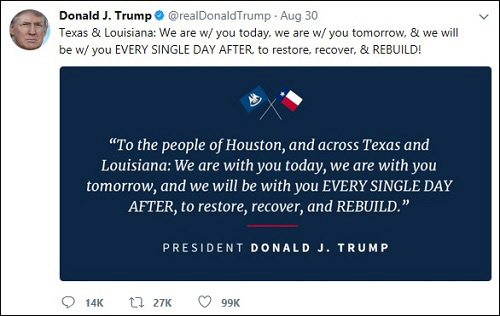