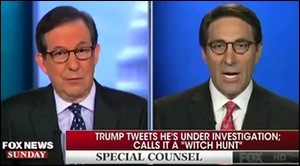 Four years ago Wall Street On Parade published an investigative report with the headline: “Jay Sekulow: The Man Pumping the IRS Scandal on Network TV Sits at the Center of a Web of Nonprofits That Have Paid Him, His Family and Related Businesses $40 Million Since 1998.” Add millions of dollars more to the above figure and you have an updated account of the man the President of the United States just added to his white collar criminal defense legal team. Oh yes, there’s one more update, Jay Sekulow has no white collar criminal defense legal experience.

Sekulow also appears to be the new spokesperson for Trump’s legal team.  His tenure in that position may be short-lived given his recent roasting by comedian Stephen Colbert. (See video clip below.) This past Sunday, June 18, Sekulow made the rounds of the Sunday talk shows, which included getting into a heated argument with Chris Wallace on Fox News Sunday on whether Sekulow had just flip-flopped on whether Trump is under investigation by the Justice Department’s Special Counsel, Robert Mueller.

Colbert had this take on Sekulow’s performance on Fox News:

One sentence during Sekulow’s appearance on Fox News Sunday might provide some insight into where this lawyer plans to go with the Trump case. At one point Sekulow told Wallace: “I just gave you the legal theory, Chris, of how the constitution works….” A great deal of Sekulow’s past has been advancing right-wing cases to the U.S. Supreme Court.

Back in 2013, Sekulow was making the rounds of the news talk shows to hype the story that Obama’s IRS was unfairly targeting right-wing nonprofits. We wrote at the time:

“Jay Sekulow will never be accused of a lack of audacity. The man who has orchestrated and pumped the ‘scandal’ that the IRS was unfairly targeting nonprofits tied to the Tea Party, is the same man who filed 27 applications with the IRS in recent years seeking tax-exempt status for Tea Party and related groups. He’s also the man who together with family and business interests have reaped at least $40 million since 1998 from a tangled web of IRS approved nonprofits with eye-popping conflicts of interest.

“In the early days of the IRS controversy, Jay Sekulow was a major source of information for network news. On May 13, he framed the controversy for CBS News and the PBS Newshour. Two days later he appeared on GBTV with Glenn Beck, framing the current IRS matter as ‘worse’ than in the days of Nixon. He also appeared on the Larry Kudlow show on CNBC, which ran a headline across the screen ‘Time for Independent Counsel.’ ”

In yet another investigative report published by Wall Street On Parade in 2013, we found money ties between Sekulow and the former U.S. Attorney General, John Ashcroft. We wrote at the time:

“In 2005, the same year that Ashcroft stepped down from the Department of Justice and accepted a faculty position at Regent, a nonprofit was formed by Sekulow called the Law and Justice Institute. Under its program description the following year, it stated: ‘Contract to provide the services of distinguished individuals to participate in educational activities related to the organizations exempt purposes: Regent University School of Law – Distinguished Professor of Law and Government.’ That title is the one carried by John Ashcroft.

“From 2006 through the most recently available tax return for 2011, the Law and Justice Institute has paid a total of $2,381,667 to a business called Educational Resources Associates, LLC listed at a residential address in Washington, D.C. Public records show the property was formerly owned by a John and Janet Ashcroft, the name of the former U.S. Attorney General and his wife. Despite the Ashcrofts selling the home in 2005, the tax returns for the Law and Justice Institute through 2011 still carry the same address for Educational Resources Associates, LLC.

“I called the current owner of the residence and was assured that no business is being run out of that address. So why aren’t the checks being returned by the post office? Are they being hand delivered to the principal owner of Educational Resources Associates, LLC?

“A phone call to the accountant for the Institute and multiple emails yielded no further information. (I will update this article if and when that information is forthcoming.)

“In the last two years, Educational Resources Associates has taken a big pay cut from $450,000 annually to under $300,000; but an additional business has been added as a recipient of funds from the Law and Justice Institute – Advocacy Services, Inc. with an address of 977 Centerville Turnpike, Virginia Beach, Virginia. That’s the address for Pat Robertson’s Christian Broadcasting Network. Tax returns for 2010 and 2011 show a total of $1 million being paid to the business. Jay Sekulow continues to be listed on the tax returns as the ‘principal officer’ of the Law and Justice Institute.

“The Law and Justice Institute is a nonprofit organization receiving a taxpayer subsidy. John Ashcroft was the former highest ranking law enforcement agent in the U.S. The public has a right to transparency with this organization, its reason for existing and the gritty details of its money flows.

“As for the IRS and the Tea Party, a pivotal question that corporate media has failed to ask, is why, if all these Tea Party-type groups are genuinely independent, spontaneous grassroots uprisings, did 27 of them all end up being handled by one man – Jay Sekulow.”

American citizens have been waiting far too long for an in-depth, independent investigation of how money has totally corrupted Washington.