Back in 2014 New York Times columnist Paul Krugman embarked on a mission to defend President Obama’s reform of Wall Street’s biggest banks that had brought the country to the brink of financial collapse just six years earlier. In August of 2014 Krugman wrote that the Dodd-Frank financial reform legislation that Obama had signed into law in 2010 “is a success story.”

Krugman’s rubber stamp of Dodd-Frank came despite the fact that JPMorgan Chase, the country’s largest bank, had just two years earlier – long after the passage of Dodd-Frank – used hundreds of billions of dollars of its depositors’ money in its commercial bank, Chase, to make wild gambles in derivatives in London, losing at least $6.2 billion along the way. This so-called “London Whale” debacle correctly convinced millions of Americans that the only way to truly reform Wall Street was to remove the taxpayer-backstopped, insured deposits from the grasp of Wall Street by restoring the Glass-Steagall Act of 1933. That legislation barred commercial banks holding insured deposits from merging with their casino cousins – the investment banks and brokerage firms on Wall Street.

The Glass-Steagall legislation had kept America’s financial system safe for 66 years. After its repeal in 1999 under the Clinton administration, it took just nine years for Wall Street to blow up the U.S. economy in the greatest collapse since the 1929 Wall Street crash and ensuing Great Depression.

On December 15, 2014, Krugman was back on his soapbox after Citigroup used its lobbying muscle to effectively repeal a critical component of the Dodd-Frank legislation, with the result that trillions of dollars of dangerous derivatives were left on the books of the insured commercial banks which were now housed under the same roof as Wall Street’s high risk investment banks.

On December 15, 2014, Krugman wrote: “I’d argue that regulating insured banks is something of a sideshow, since the 2008 crisis was brought on mainly by uninsured institutions like Lehman Brothers and A.I.G.”

So many writers at the New York Times are repeating this false narrative that it’s beginning to sound like a scripted story line that has some invisible, but powerful, public relations firm behind it.

In the first place, Krugman is dead wrong to call Lehman Brothers and AIG “uninsured institutions.” Both companies owned FDIC insured banks in 2008. In the second place, Lehman and AIG did not bring on the crisis, they simply succumbed to the financial unraveling that occurred during the crisis. Lehman filed for bankruptcy in September 2008; AIG was bailed out by the government in September 2008.

Long before Lehman and AIG were teetering, Citigroup, the lobbying force behind the repeal of the Glass-Steagall Act and the poster child for everything that is wrong with allowing a speculating Wall Street bank to own a taxpayer-backstopped commercial bank (Citibank), was in dire financial shape. According to the Office of the Comptroller of the Currency, Citigroup’s serious problems began in the summer of 2007. As reports in the press prove, those problems escalated in the waning months of 2007.

Peter Eavis reported at Fortune in November 2007 that the talk of creating a Super SIV to absorb toxic assets on Wall Street “looked very much like a way of supporting Citigroup” since it had “by far the largest exposure to SIVs,” a total of $83 billion. (SIVs were Structured Investment Vehicles which Citigroup used to park tens of billions of dollars of risky assets off its balance sheet.)

By July 2008, Citigroup was in such trouble that Bloomberg News published this headline: “Citigroup Unravels as Reed Regrets Universal Model.” The article was by Lisa Kassenaar. Curiously, Bloomberg News appears to have removed the article from its archives.

The head of the FDIC at the time of the crisis, Sheila Bair, has also acknowledged Citigroup’s outsized role in the 2008 financial crash. In her book on the crisis, Bull by the Horns, she writes as follows:

Citigroup’s tentacles extended into every other major Wall Street bank but no one knew for certain which firms had major exposure to it, particularly on its over-the-counter derivatives contracts which remain a black hole to this day. The result was the massive dumping of its stock on a fragile market, which served to beat down the stock of all of its peers. The chart below shows how dramatically Citigroup sold off during the crisis versus the S&P 500. This selloff continued long after Lehman and AIG had succumbed to the crisis.

The final proof that the combination of Citigroup’s investment banking and retail brokerage operations (pumping and dumping bogus securities into the marketplace) was a fatal combination for an insured depository institution like Citibank to be hinged to, is in the unprecedented amount of money Citigroup received as a bailout – the largest bailout of a bank, by far, in U.S. financial history. The U.S. government injected $45 billion in equity into Citigroup and over $300 billion in asset guarantees; the Federal Deposit Insurance Corporation (FDIC) guaranteed $5.75 billion of Citigroup’s senior unsecured debt and $26 billion of its commercial paper and interbank deposits; and the Federal Reserve secretly funneled $2.5 trillion in almost zero-interest loans to units of Citigroup between 2007 and 2010.

Yes, the failures of the Dodd-Frank legislation have cast a negative light on the legacy of Barack Obama’s presidency, but why is it Paul Krugman’s job to massage that legacy into something it’s not? 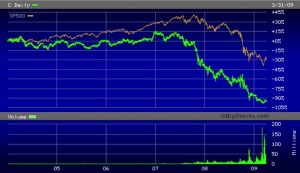