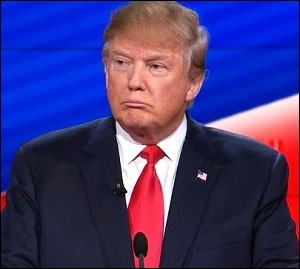 Yesterday, Bloomberg News reporters Jennifer Jacobs and Margaret Talev snagged an interview with President Donald Trump. Headlines quickly spread that during the interview Trump had indicated he was looking at breaking up the biggest Wall Street banks (so that commercial banks holding taxpayer-backstopped deposits were no longer under the same ownership as the high-risk investment banks which had failed so spectacularly during the 2008 financial crash).

Bloomberg News has now released a transcript of the interview. The portion pertaining to the Wall Street banks reads as follows:

BLOOMBERG NEWS: Should we break up the big banks? Do you support that?

There are — you know, some people that want to go back to the old system, right? So we’re going to look at that. We’re going to — we’re looking at it right now as we speak.

And Dodd-Frank is — is going to be very, very seriously changed so the banks can go back to loaning money.

The “old system” that Trump is referring to is the legislation known as the Glass-Steagall Act. Congress passed the legislation on June 16, 1933 following a period of unprecedented commercial bank failures in the wake of the 1929 stock market crash. Many of the failures could be traced to the banks’ involvement in trading activities on Wall Street using depositor funds. The legislation created Federal insurance on bank deposits to restore confidence in the nation’s banks while also banning banks taking insured deposits from owning stock trading/underwriting firms. The U.S. financial system was safeguarded under this separation for 66 years until the Bill Clinton administration repealed the Act in 1999 with pressure from Citigroup.

While Citigroup’s subsequent epic meltdown was the poster child for bank hubris in the 2008 crash, the Bank of United States assumed that role after the ’29 crash. When Bank of United States collapsed in December 1930, it was the fourth largest depositor bank in New York City, holding $268 million for over 400,000 small time depositors. It constituted the largest banking collapse in the nation’s history at that point.

The name of the bank, suggesting it had U.S. government backing, which it did not, fueled further bank panics when it closed its doors and locked out depositors. There was no Federal deposit insurance in place at that time.

Of particular note to investigators, Bank of United States had a stock trading arm, the Bankus Corp. It was through that trading unit that the bank manipulated the price of its own stock, using the money of depositors, and then used the shares as collateral for loans. Other large deposit-taking banks functioned in a similar capacity with one foot on Wall Street and the other behind a bank teller window.

While the U.S. Congress conducted no macro public hearings on the Wall Street banking practices which led to the 2008-2010 financial collapse in the United States, the Senate Banking Committee of 1932 to 1934 intensively examined the corrupt Wall Street banking practices of that era, holding public hearings which produced outrageous testimony of systemic corruption that fueled headlines for years. It was the resulting public outrage and keen awareness of what had transpired that provided Congress and President Franklin D. Roosevelt with the mandate to enact the Glass-Steagall Act.

One of the key findings of the earlier era was that the vast dollar volume of corrupt securities dealings, which had infused themselves into the arteries of the largest commercial banks, was strangling legitimate economic activity.

The Senate report at the consummation of the hearings noted the following:

“In retrospect, the fact emerges with increasing clarity that the excessive and unrestrained speculation which dominated the securities markets in recent years, has disrupted the flow of credit, dislocated industry and trade, impeded the flow of interstate commerce, and brought in its train social consequences inimical to the public welfare.”

The 1934 Senate report specifically calls out as “evils” the fact that commercial banks holding depositor money were operated under the same roof with speculating investment banks on Wall Street. The report noted:

“Many of the evils that were disclosed at the hearings before the United States Senate subcommittee were inherent in the interrelationship of commercial banking and investment banking. A great many of these evils were, however, attributable to the utter disregard by officers and directors of commercial banks and investment affiliates of the basic obligations and standards arising out of the fiduciary relationship extending not only to stockholders and depositors, but to persons seeking financial accommodation or advice. The hearings disclosed, on the part of many bankers, a woeful lack of regard for the public interest and a proper conception of fiduciary responsibility.

“Personages upon whom the public relied for the guardianship of funds did not regard their position as impregnated with trust, but rather as a means for personal gain. These custodians of funds gambled and speculated for their own account in the stock of the banking institutions which they dominated; participated in speculative transactions in the capital stock of their banking institutions that directly conflicted with the interest of these institutions which they were paid to serve; participated in and were the beneficiaries of pool operations; bestowed special favors upon officers and directors of their banking institutions and investment affiliates to insure domination and control, for their own personal aggrandizement, of these officers and directors; received the benefits of ‘preferred lists’, with resultant impairment of their usefulness and efficacy as executive officers; bestowed the benefits of ‘preferred lists’ upon individuals who were in a position to aid and abet their purposes and plans; devoted their time and effort for substantial consideration to extra-banking activities and positions to the detriment of the institutions these officers were paid to serve; borrowed money from the banking institutions either without or with inadequate collateral; procured the banks’ loans for other individuals to effectuate the purposes of these officers and directors; formed private companies to cover up operations conducted for their own pecuniary gain; availed themselves, as directors of private corporations, of inside information to aid them in transactions in the securities of these corporations; caused to be paid by the banking institutions to themselves excessive compensation; had voted to themselves participations in management funds and substantial pensions; and resorted to devious means to avoid the payment of their just Government taxes.”

Each of the systemically corrupt activities called out by the Senate investigations of 1932 to 1934 had a direct equivalent in the 2008-2010 crash. Tragically, corporate media coverage of the similarity of crimes in the two eras and the resulting long-term impact to the overall economy has been woefully lacking.

In yesterday’s Bloomberg News interview with President Trump, the questions concerning breaking up the big banks were immediately followed by questions on the growth of Gross Domestic Product (GDP) in the U.S. – the value of the goods and services produced by the nation’s economy minus the value of the goods and services used up in production. GDP serves as a barometer of the nation’s economic health. (Since the financial crash of 2008-2010, annual GDP has been running at a subpar 2 percent or less.)

The Q&A went as follows:

BLOOMBERG NEWS: How long on GDP bounce back?

BLOOMBERG NEWS: A year to get to 4 percent? Eighteen months?

Trump has surrounded himself with some of the smartest financial minds in the country. Yes, some of them have serious conflicts of interests. Others, however, have cashed out much of their holdings on Wall Street and might, just possibly, be operating from an altruistic view of the U.S. economy they will leave to their children and grandchildren.

The release of first quarter GDP on April 28 by the Bureau of Economic Analysis showed an anemic growth of just 0.7 percent in the first quarter of 2017. This might be just the wakeup call that the Trump administration needs to confront the reality that the unprecedented concentration of deposits and assets and dodgy derivatives at a handful of mega Wall Street banks is an insurmountable headwind to economic recovery and must be addressed sooner rather than later.

Gary Cohn, the former President of Goldman Sachs who now serves as Trump’s Director of the National Economic Council, met in private on April 5 with members of the Senate Banking Committee. News was leaked from that meeting that Cohn may support the restoration of some form of the Glass-Steagall Act. Less than a month later, Trump is making similar noises to Bloomberg News. Clearly, something is afoot.