A Crisis of Confidence in Government Can Harm U.S. Economic Growth 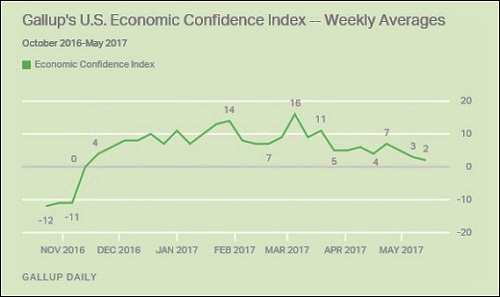 When the Commerce Department released its data on April 28 for Gross Domestic Product (GDP) in the first quarter, it signaled the slowest growth in three years. The economy had grown at a tepid 0.7 percent annual rate as a result of weak consumer spending. The individual consumer matters greatly to growth in the U.S., accounting for more than two-thirds of economic activity. In the first quarter, consumer spending registered at a 0.3 percent rate, a pace not seen since the depths of the financial crisis in the fourth quarter of 2009.

It is perhaps ironic that the 1 percent in America control Washington through lobbyists and a perverse campaign finance system but the 99 percent, the consumers, control the economic fate of the country. If consumers lose confidence in the country’s leadership, they will retrench from spending in order to build a larger cash safety net for a potential downturn.

There has now been a solid week of confidence-draining news swirling around the President of the United States, Donald Trump. It began last Tuesday evening with the President’s firing of FBI Director James Comey, who had testified before Congress that he had an open investigation of the Trump campaign’s ties to Russia. That was followed by what seemed like an admission from the President in an NBC News interview that he had Comey’s Russian investigation on his mind when he fired him – leading to endless media comparisons to Watergate.

Next came the news that on January 27 President Trump had held a one-on-one dinner with Comey in the White House where he had asked for a pledge of loyalty from the FBI Director. (The FBI Director owes his oath of loyalty to the American people, not to any elected politician.)

This week Americans were greeted with the disturbing news that the President had leaked classified intelligence during a meeting with Russian Foreign Minister Sergei Lavrov and Russian Ambassador Sergei Kislyak. The media furor over this had barely died down when, yesterday, the New York Times reported that Comey has been compiling memorandums of his various meetings with the President. One memo indicates that the President asked Comey “to shut down the federal investigation into Mr. Trump’s former national security adviser, Michael T. Flynn, in an Oval Office meeting in February,” according to sources who spoke to the New York Times. The White House has denied such a request was made.

The Times reports that Jason Chaffetz, the Republican Chair of the House Oversight Committee, has demanded that the FBI turn over all “memoranda, notes, summaries and recordings” of discussions between Mr. Trump and Mr. Comey.

Yesterday, the Gallup organization released its U.S. Economic Confidence Index which “averaged +2 for the week ending May 14. Gallup notes that this is the lowest score recorded this year, “down considerably from the Index’s high point of +16 in early March as the stock market hit record highs.”

The crisis of confidence in Washington can rapidly ripple into the broader economy. Partisan bickering and throwing up roadblocks is only exacerbating the cynicism of the American people. It’s time for the Congressional leadership to give the American people the disinfecting sunshine of open public hearings in order to begin to restore trust in government.