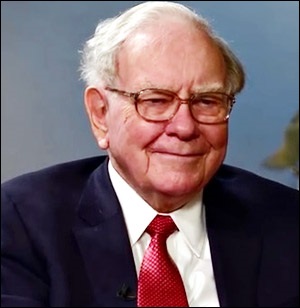 Warren Buffett, the CEO of Berkshire Hathaway, authors an annual letter to shareholders that receives wide media coverage for the nuggets of wisdom dispersed to the masses. His latest letter, released on Saturday, trumpets American exceptionalism, the miraculous market system Americans have created, while it blithely dismisses the greatest wealth and income inequality in America since the 1920s. Buffett preposterously observes that “Babies born in America today are the luckiest crop in history.”

Let’s start with that last statement. According to our own Central Intelligence Agency, there are 55 countries that have a lower infant mortality rate than the United States. Even debt-strapped Greece beats the United States.

Much of what Buffett has to say in this letter sounds like unadulterated propaganda to reassure the 99 percent that his amassing of a net worth of $76.3 billion was a result of America’s great economic system which is percolating along just fine. Buffett writes:

“Americans have combined human ingenuity, a market system, a tide of talented and ambitious immigrants, and the rule of law to deliver abundance beyond any dreams of our forefathers…You need not be an economist to understand how well our system has worked. Just look around you. See the 75 million owner-occupied homes, the bountiful farmland, the 260 million vehicles, the hyper-productive factories, the great medical centers, the talent-filled universities, you name it – they all represent a net gain for Americans from the barren lands, primitive structures and meager output of 1776. Starting from scratch, America has amassed wealth totaling $90 trillion…”

Mentioning the rule of law in the same breath with our market system shows Buffett’s hypocrisy in the worst light. Millions of Americans are still seething over the fact that not one top executive on Wall Street has gone to jail for their role in issuing fraudulent securities with triple-A ratings that brought on the greatest financial collapse since the Great Depression. Millions of Americans are still waiting for the U.S. Justice Department or the Securities and Exchange Commission to address the well documented market rigging charges that Michael Lewis made in his book, Flash Boys and on 60 Minutes. Millions of Americans have lost trust in their Congress, now with an approval rating of just 19 percent, to impose legislation to stop the serial crimes that continue to spew from Wall Street. Tens of millions of Americans believe that Wall Street’s financing of political campaigns has so completely corrupted the U.S. market system that it has become an institutionalized wealth transfer system from the pockets of the 99 percent to the 1 percent. As the ever-expanding raps sheets of JPMorgan Chase and Citigroup make clear, there is strong evidentiary support for this view.

Buffett’s reference to America’s “bountiful farmland” fails to mention the gut-wrenching poverty of migrant farmworkers that Jim Hightower captured just last week at Truthout, writing: “Allowing such abject poverty in our fields of abundance is more than shameful — it’s an oozing sore on our national soul, made even more immoral by the fact that our society throws 40 percent of our food into the garbage.”

After Buffett lauds that “America has amassed wealth totaling $90 trillion” he breezes past one of the most important debates of this century — the unprecedented wealth and income inequality in the U.S. — with this: “However our wealth may be divided, the mind-boggling amounts you see around you belong almost exclusively to Americans.” Buffett seems to be suggesting that the thousands of families who were illegally foreclosed on by Wall Street banks during the financial collapse (including active duty military members) should be comforted that the beneficiary of the rip offs were fellow Americans – not foreigners. Buffett writes:

“It’s true, of course, that American owners of homes, autos and other assets have often borrowed heavily to finance their purchases. If an owner defaults, however, his or her asset does not disappear or lose its usefulness. Rather, ownership customarily passes to an American lending institution that then disposes of it to an American buyer. Our nation’s wealth remains intact. As Gertrude Stein put it, ‘Money is always there, but the pockets change.’ ”

Millions of Americans clearly understand that those pockets, increasingly, belong to the 1 percent billionaire class who are gaming the system with a wink from our Congress.

Buffett also rolls out the threadbare, thoroughly discredited myth that Wall Street is an efficient allocator of capital. He writes:

“Above all, it’s our market system – an economic traffic cop ably directing capital, brains and labor – that has created America’s abundance. This system has also been the primary factor in allocating rewards.”

Since at least the 1990s, Wall Street’s radar in directing capital has been landing crashed heaps of jumbo jets on the financial runways of America. As dozens of lawsuits and Justice Department settlements have spelled out, in the lead up to the 2008 crash, Wall Street was paying rating agencies to deliver triple-A ratings to hundreds of billions of dollars of pools of subprime mortgages that they knew were destined to fail from their own in-house reviews.

Less than a decade earlier, Ron Chernow described for New York Times’ readers how Wall Street’s broken capital allocation system had brought on the dot.com bust. Chernow wrote: “Let us be clear about the magnitude of the Nasdaq collapse. The tumble has been so steep and so bloody — close to $4 trillion in market value erased in one year —  that it amounts to nearly four times the carnage recorded in the October 1987 crash.” Chernow compared the Nasdaq stock market to a “lunatic control tower that directed most incoming planes to a bustling, congested airport known as the New Economy while another, depressed airport, the Old Economy, stagnated with empty runways. The market functioned as a vast, erratic mechanism for misallocating capital across America,” Chernow correctly observed.

Buffett has a built-in conflict that apparently prevents him taking off his rose-colored glasses when it comes to Wall Street. The company where the bulk of his wealth is invested, Berkshire Hathaway, owns $2.7 billion of Goldman Sachs stock; $27.5 billion of Wells Fargo; and $5 billion of Bank of America preferred stock.

Denying that America is headed in the wrong direction; denying that Wall Street has become hopelessly corrupted won’t get the problems fixed. It will ensure that today’s young generation will become debt slaves to Wall Street and the one percent. Don’t allow Buffett’s facade of homespun folksiness to distract you from the hard facts.