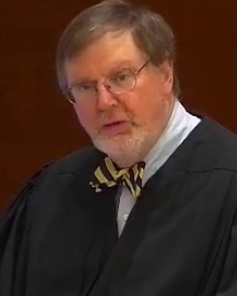 In 2008, when corrupt and insolvent financial firms on Wall Street were being bailed out by the U.S. taxpayer after a vote by Congress, the firms were simultaneously funneling millions of those bailout dollars as bonuses to the very executives who had played a role in the firm’s demise. The American people were told by our government that the bonuses had to be paid because they were part of a legally binding contract between the company and the employee and contract law is sacrosanct in the U.S.

Now flash forward to President Donald Trump’s Executive Order of January 27, 2017. The President issued a wide-ranging travel ban that set off chaos at the nation’s airports; disrupted thousands of lives; and prevented lawful residents of the United States from returning to their families and homes after travel abroad. The President directed a 90-day suspension on entry to the U.S. by individuals from Iran, Iraq, Syria, Somalia, Sudan, Libya, and Yemen; a 120-day suspension on refugees from any country; and a permanent suspension of entry of Syrian nationals.

Like the bonus participants on Wall Street, tens of thousands of the affected individuals held legally binding contracts with our government – either green cards giving them permanent legal residence in the United States or legal visas. But the immigrants’ contractual agreements with the U.S. were trampled and ignored.

For those travelling outside the U.S. when the surprise order came, they were barred from re-entry, detained at airports or sent back to a foreign country. For those inside the United States from the seven countries when the order hit – even those with properly obtained visas and green cards – they now had been stripped of their ability to travel, to see family abroad, attend a funeral of a loved one abroad, take part in university research or lectures abroad.

According to the lawsuit filed against Trump’s actions by the Attorneys General of the States of Washington and Minnesota, this is what our government did to legal permanent residents of the United States:

“On January 28, 2017, a spokeswoman for DHS [Department of Homeland Security] stated that lawful permanent residents, or green card holders, would be barred from entry pursuant to the Executive Order…

“On January 29, 2017, DHS reversed its decision through a statement by Secretary Kelly that purported to exempt lawful permanent residents from the Executive Order…Two days later, however, on January 31, 2017, the U.S. Customs and Border Protection, a DHS sub-agency, issued a statement entitled ‘Protecting the Nation from Foreign Terrorist Entry into the United States.’ Although it repeated Secretary Kelly’s earlier statement, it also confirmed in its ‘Questions and Answers’ section that the Executive Order applies to lawful permanent residents and that their entry would depend on receipt of a ‘national interest waiver consistent with the provisions of the Executive Order.’ ”

Last Friday, Judge James L. Robart of the U.S. District Court for the Western District of Washington State held oral arguments on the case and issued a Temporary Restraining Order (TRO) which effectively blocked the President’s Executive Order. (See video of the oral arguments below.)

Representing the State of Washington at the oral arguments was the State’s Solicitor General, Noah Purcell. A key part of Judge Robart’s questions to Purcell pertained to a state having standing to bring a lawsuit against the U.S. government. Purcell argued these points brilliantly at both oral arguments and in the Amended Complaint filed with the Court. His points were also buttressed by an Amicus Brief filed by ten law professors from around the country, including Amy J. Wildermuth, Professor of Law at the University of Utah, who was counsel of record for multiple states who had previously filed an Amicus in the seminal case on state standing, Massachusetts v. EPA.

During the Oral Arguments, Judge Robart noted that there had been no fatal terrorist attacks within the United States that were carried out by immigrants from the seven countries singled out by Trump’s Executive Order.

If this case makes it to the U.S. Supreme Court, it has the potential to dramatically broaden or narrow, depending on the outcome, the ability of a State Attorney General to sue the Federal government for harming the citizens or residents of the State, its government institutions like state-run universities and colleges, or even the corporate employers within the state who add to overall financial well being of residents by paying taxes and providing jobs.

Washington State offered the following evidence of how it is being harmed in its Amended Complaint:

“Immigration is an important economic driver in Washington. Many workers in Washington’s technology industry are immigrants, and many of those immigrant workers are from Muslim-majority countries. Immigrant and refugee-owned businesses employ 140,000 people in Washington. Many companies in Washington are dependent on foreign workers to operate and grow their businesses. The technology industry relies heavily on the H-1B visa program, through which highly skilled workers like software engineers are permitted to work in the United States. Washington ranks ninth in the U.S. by number of applications for high-tech visas. Microsoft, a corporation headquartered in Redmond, Washington, is the State’s top employer of H-1B visa holders and employs nearly 5,000 people through the program. Other Washington-based companies, including Amazon, Expedia, and Starbucks, employ thousands of H-1B visa holders.

“Microsoft’s U.S. workforce is heavily dependent on immigrants and guest workers. At least 76 employees at Microsoft are citizens of Iran, Iraq, Syria, Somalia, Sudan, Libya, or Yemen and hold U.S. temporary work visas. There may be other employees with permanent-resident status or green cards. These employees may be banned from re-entering the U.S. if they travel overseas or to the company’s offices in Vancouver, British Columbia.

“Seattle-based company Amazon also employs workers from every corner of the world. Amazon’s employees, dependents of employees, and candidates for employment with Amazon have been impacted by the Executive Order that is the subject of this First Amended Complaint. Amazon has advised such employees currently in the United States to refrain from travel outside the United States.

“Bellevue-based company Expedia operates a domestic and foreign travel business. At the time of the filing of the Complaint, Expedia had approximately 1,000 customers with existing flight reservations in or out of the United States who hold passports from Iran, Iraq, Syria, Somalia, Sudan, Libya, or Yemen. The Executive Order will restrict business, increase business costs, and impact current employees and customers.

“As a result of the Executive Order, Washington residents have been separated from their families. One Somali refugee, who has lived in Seattle for 12 years, went to Sea-Tac Airport to pick up her husband who was flying from Somalia through Vienna, but never saw him before he was sent back on a flight to Vienna. Another individual who was detained is related to a Sea-Tac Airport worker. A third detainee, the sister of a blind Iraqi man who lives in Seattle, was prevented from seeing him after 15 years apart. Other Washington residents will be unable to travel to Canada to visit family. An Iraqi-born software engineer, who works in Facebook’s Seattle office and was in Canada watching his little brother perform in a high school play, received a phone call from his immigration attorney shortly before the Executive Order took effect, advising him to rush back across the border.

“Still other Washington residents will be prevented from being reunited with family members. One Syrian family who recently resettled in Seattle is waiting for an older child still in a refugee camp who was set to arrive next week, but for the Executive Order.

The State of Minnesota told the Court in the amended complaint that 30,000 of its residents came from six of the impacted countries: Somalia, Sudan, Iran, Iraq, Syria, and Yemen. The State cited the horrific example of a 4-year old Somali girl “who was separated from her mother and two sisters shortly after being born in a refugee camp in Uganda, was scheduled to arrive on January 30, 2017. Her mother had received visas for herself and her other two daughters, but she was pregnant when they were approved, so her newborn was not covered. She was told that her whole family would have to start the visa process over if she tried to get one for her youngest daughter or she could move to the United States and apply for reunification which would take less than one year. Four years later, the youngest daughter finally received a visa to come to the United States. The young girl was at the airport in Uganda on January 30, 2017, ready to board the plane, but she was not allowed due to the Executive Order.” (After intervention by members of Congress, the child has been reunited with her mother and sisters in the U.S.)

The State Attorneys General are also making the case that this is a thinly veiled effort to ban Muslims and thus also violates the First Amendment’s guarantee of religious freedom. (The seven targeted countries are majority Muslim nations.) The Attorneys General offer the following chronology of events in their amended complaint:

“On June 14, 2016, candidate Trump reiterated his promise to ban all Muslims entering this country until ‘we as a nation are in a position to properly and perfectly screen those people coming into our country…’

“In a January 27, 2017, interview with the Christian Broadcasting Network, President Trump confirmed his intent to prioritize Christians in the Middle East for admission as refugees…”

The U.S. government quickly appealed Judge Robart’s ruling to the Ninth Circuit Appellate Court over the weekend, arguing that “The injunction immediately harms the public by thwarting enforcement of an Executive Order issued by the President, based on his national security judgment.”

In fact, the President had been in office just seven days when he signed the Executive Order; had no previous service in any government post; had no prior experience in national security matters. According to numerous media reports, he constructed the Executive Order in a vacuum without consulting with the Federal agencies with expertise in this area, thus creating bedlam at the nation’s airports and disrupting lives around the globe.

The Ninth Circuit left the Temporary Restraining Order in place while setting up a briefing schedule for the two sides that ends today.

As protests against Trump’s authoritarian practices created renewed protests in the U.S. over the weekend, the President was featured on the front covers of respected magazines as a frightening rogue. The cover of the most popular magazine in Germany, Der Spiegel, depicted Trump lopping off the head of the Statue of Liberty while holding a bloody knife in his hand. The Economist, based in the U.K., showed Trump throwing a Molotov cocktail and opining that “Promises that sounded like hyperbole in the campaign now amount to a deadly serious revolt aimed at shaking up Washington and the world.”

Also over the weekend, Gallup reported that only 42 percent of Americans approve of the job Trump is doing – representing a new low for any president at this time in his tenure.

With Congressional Republicans showing little backbone in reining in their rogue President, Americans now look to the Courts. A disappointment there could be fatal to the future of the United States.