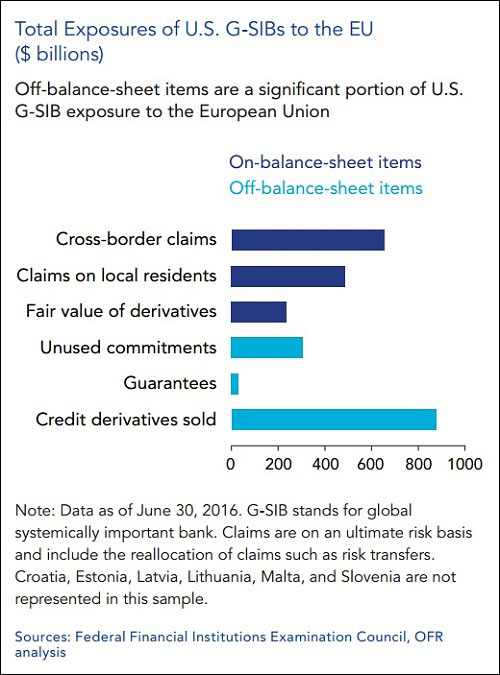 Just 17 days from today, Donald Trump will be sworn in as the nation’s 45th President and deliver his inaugural address. Trump is expected to announce priorities in the areas of education, infrastructure, border security, the economy and curtailing the outsourcing of jobs. But Trump’s agenda will be derailed on all fronts if the big Wall Street banks blow up again as they did in 2008, dragging the U.S. economy into the ditch and requiring another massive taxpayer bailout from a nation already deeply in debt from the last banking crisis. According to a report quietly released by the U.S. Treasury’s Office of Financial Research less than two weeks before Christmas, another financial implosion on Wall Street can’t be ruled out.

The Office of Financial Research (OFR), a unit of the U.S. Treasury, was created under the Dodd-Frank financial reform legislation of 2010. It says its role is to: “shine a light in the dark corners of the financial system to see where risks are going, assess how much of a threat they might pose, and provide policymakers with financial analysis, information, and evaluation of policy tools to mitigate them.” Its 2016 Financial Stability Report, released on December 13, indicates that Wall Street banks have been allowed by their “regulators” to take on unfathomable risks and that dark corners remain in the U.S. financial system that are impenetrable to even this Federal agency that has been tasked with peering into them.

At a time when international business headlines are filled with reports of a massive banking bailout in Italy and the potential for systemic risks from Germany’s struggling giant, Deutsche Bank, the OFR report delivers this chilling statement:

“U.S. global systemically important banks (G-SIBs) have more than $2 trillion in total exposures to Europe. Roughly half of those exposures are off-balance-sheet…U.S. G-SIBs have sold more than $800 billion notional in credit derivatives referencing entities domiciled in the EU.”

When a Wall Street bank buys a credit derivative, it is buying protection against a default on its debts by the referenced entity like a European bank or European corporation. But when a Wall Street bank sells credit derivative protection, it is on the hook for the losses if the referenced entity defaults. Regulators will not release to the public the specifics on which Wall Street banks are selling protection on which European banks but just the idea that regulators would allow this buildup of systemic risk in banks holding trillions of dollars in insured deposits after the cataclysmic results of similar hubris in 2008 shows just how little has been accomplished in terms of meaningful U.S. financial reform.

Adding to the potential for another epic crash on Wall Street taking down the entire U.S. economy is data within the OFR report showing how interconnected the big Wall Street banks have become to the largest U.S. insurers through derivatives. This has been allowed to happen despite the fact that the giant insurer, AIG, required a government backstop of $182 billion following the 2008 crash because it had sold credit default protection via derivatives to the big Wall Street banks.

The OFR report includes the following data on life insurers:

Just who is backstopping this $2 trillion in risk? The answer is mind-numbing. The counterparties to the life insurers are the same behemoth Wall Street banks who have their own potential nightmare scenario if there are major European bank defaults. The OFR report indicates the following:

It is impossible to overstate the dangers of this daisy chain of interconnectedness. The Wall Street banks that created the greatest financial collapse since the Great Depression in 2008 have now metastasized their failed derivatives model throughout the life insurance industry of the U.S. – raising the very real specter that in the next crash both massive banks and massive life insurers would require a taxpayer bailout.

Five of the largest U.S. banks that show up on the derivatives counterparty list to the U.S. life insurers, also show up on another list. The OFR report notes:

“The Basel Committee methodology measures banks’ complexity in part by looking at data on notional derivatives positions. These data reflect the nominal value of underlying derivatives contracts. They have been volatile since 2012 but remain highly concentrated among the five largest banks. As with OFR findings on insurance (see Section 2.5), OFR analysis suggests higher derivatives exposures for banks are associated with greater systemic risk.”

The OFR report also indicates that regulators still do not have access to adequate data from the biggest banks and insurers to assess the dangers in real time. The report notes:

“Deficiencies in data and data management remain a critical vulnerability. Data needs remain unfilled, particularly in shadow banking markets. Many of the new data are not ready or available for analysis. Despite progress, the probability remains high that data deficiencies will again prevent risk managers and regulators from assessing risks before it is too late.”

President-elect Donald Trump and his closest advisers should make it their top priority to read this OFR report carefully, reflect on the current and future ramifications of the reckless and irresponsible U.S. banking model on its citizens and economy at large, and immediately begin to press Congress for the restoration of the Glass-Steagall Act upon his swearing in on January 20.