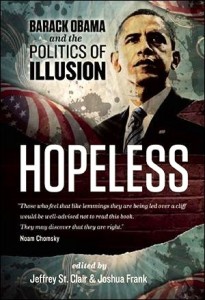 The man who was compared to a Messiah when he won the presidential election in 2008 has been on an excruciatingly long goodbye tour. First there was his farewell speech to the United Nations in September. Next came his farewell tour across Europe in November – the Messiah’s last foreign trip. Then there was his farewell speech in the U.S. Yesterday, there was a tortuously vacuous farewell press conference, which toward the end, had the feeling that actors from central casting had replaced real journalists in the press room in order to memorialize the greatness of this President.

“Whether it is truly possible to hold elected officials accountable in a political system where big money, big media, big corporations and the very rich call all the  shots is uncertain.  But we have tried and will keep trying.  So will others.  The stakes are too high not to…

We were also not among the converted as a result of spending months conducting a forensic examination of Obama’s campaign accounts. In May of 2008, we wrote the following:

“The Wall Street plan for the Obama-bubble presidency is that of the cleanup crew for the housing bubble: sweep all the corruption and losses, would-be indictments, perp walks and prosecutions under the rug and get on with an unprecedented taxpayer bailout of Wall Street. (The corporate law firms have piled on to funding the plan because most were up to their eyeballs in writing prospectuses or providing legal opinions for what has turned out to be bogus AAA securities. Lawsuits naming the Wall Street firms will, no doubt, shortly begin adding the law firms that rendered the legal guidance to issue the securities.) Who better to sell this agenda to the millions of duped mortgage holders and foreclosed homeowners in minority communities across America than our first, beloved, black president of hope and change?

“Why do Wall Street and the corporate law firms think they will find a President Obama to be accommodating? …vetting included his remarkable ‘yes’ vote on the Class Action Fairness Act of 2005, a five-year effort by 475 lobbyists, despite appeals from the NAACP and every other major civil rights group. Thanks to the passage of that legislation, when defrauded homeowners of the housing bubble and defrauded investors of the bundled mortgages try to fight back through the class-action vehicle, they will find a new layer of corporate-friendly hurdles.”

CounterPunch was also not among the converted. It published an anthology of articles on the red flags in the Obama candidacy, titled Hopeless: Barack Obama and the Politics of Illusion. CounterPunch editors, Jeffrey St. Clair and Joshua Frank, describe the books as follows:

Obama’s farewell press conference yesterday evoked images of his first press conference on November 7, 2008 as President-elect. On Obama’s right stood Larry Summers. On his left stood Robert Rubin. The President-elect was bookended by the very men who had played outsized roles in the events leading to the Wall Street financial collapse that was happening at that very moment. Summers and Rubin were standing there to symbolize that they would play important roles in shaping Obama policy. It gave new meaning to failing up.

Both Rubin and Summers had served as U.S. Treasury Secretary in the Bill Clinton administration. Both had pushed for the repeal of the Glass-Steagall Act and deregulation of derivatives, two key events that led to the epic crash of the U.S. financial system in 2008. Rubin had gone directly from the U.S. Treasury to the Board of Citigroup, the prime beneficiary of the deregulation, and collected over $125 million in compensation over the next decade. Citigroup is where Rubin went. Where Rubin had come from was Goldman Sachs, following a 26-year career there. (Goldman Sachs’ headquarters is currently under protest as a result of its tentacles extending broadly into every nook and corner of the Donald Trump administration.)

Today, the opinion pages of Bloomberg News carries a harsh assessment of Obama’s eight years with this headline: “Obama’s Failing Was a Lack of Ambition.” But that’s not what happened at all.

As we now know through the hard evidence of emails leaked by WikiLeaks, Obama was the sock puppet of Wall Street. (See related articles below.) Trump’s Goldman Sachs administration is simply the cleanup crew – and we don’t mean that in a good way.