Is Your Corporate Pension Benefit Safe Under the Trump Administration? 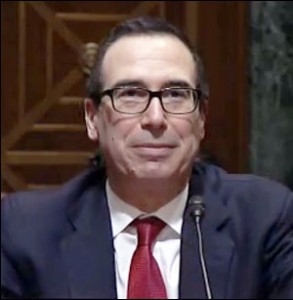 Most Americans are unaware that the Pension Benefit Guaranty Corporation, the Federal body that stands behind corporate pension plans known as defined benefit plans, has only three members and three votes on its Board of Directors: the U.S. Labor Secretary, the U.S. Commerce Secretary and the U.S. Treasury Secretary. Under the Donald Trump administration, all three votes could be problematic for workers’pension interests if Trump’s current nominees are confirmed by the U.S. Senate.

Andrew Puzder is Trump’s nominee for Secretary of the Labor Department. Puzder is already on record as opposing a substantial increase in the Federal minimum wage and an opponent of making more workers eligible for overtime pay. Much less is known about Puzder’s eyebrow-raising earlier career. From 1978 to 1991, Puzder was a trial lawyer in St. Louis at the law offices of Morris A. Shenker, the man Life Magazine called the “foremost lawyer for the mob in the U.S.” According to the book, The Money and the Power, by Sally Denton and Roger Morris, a colleague of Shenker’s called him the “front man for the St. Louis Mob.” The book reports that Shenker took over the Dunes Hotel and Casino in Las Vegas and remained its Chairman until 1984. Shenker was indicted in 1989 but did not stand trial due to serious health issues. He died the same year he was indicted at age 82.

Puzder came to his current position as CEO of the fast food chain, CKE Restaurants, by virtue of being its top corporate lawyer. After working with the mob’s lawyer in St. Louis for 13 years, and other legal stints along the way, Puzder became General Counsel for CKE Restuarants in 1997 and moved into the slot of CEO in 2000.

The controversial Steven Mnuchin, who was subjected to withering criticism by Democrats on the Senate Finance Committee during his confirmation hearing last Thursday to become U.S. Treasury Secretary, will be the second vote on the Pension Benefit Guaranty Corp. That raises even more alarm bells. Mnuchin has garnered the reputation of a cold-hearted foreclosure king who got rich on the misery of the poor and elderly. He has even earned an ad campaign against his confirmation.

The Ranking Member of the Senate Finance Committee, Senator Ron Wyden, a Democrat from Oregon, had this to say about Mnuchin in his opening comments at Mnuchin’s confirmation hearing:

During the confirmation hearing, Senator Bob Menendez, Democrat of New Jersey, examined one specific fatal conflict that Mnuchin would have as a voting member of the Pension Benefit Guaranty Corp.  Menendez said that Mnuchin was an investor in the hedge fund ESL Investments, run by Eddie Lampert, who owns 49 percent of Sears stock. The hedge fund, according to Menendez, owns another 29 percent of Sears stock, making the two by far and away the majority owner. Menendez also stated that some of the most valuable assets of Sears have been sold to the hedge fund.

According to Menendez, Mnuchin served on the Board of Directors at Sears for 12 years – a period in which the pension fund was underfunded and its benefits cut.

Menendez went on to explain Mnuchin’s conflict as a voting member of the PBGC, stating:

“The Pension Benefit Guaranty Corporation (PBGC) initiated an agreement with Sears to protect the pension benefits of the more than 200,000 plan participants after the real estate deals and significant cut to pensioners’ health subsidies that occurred during your watch.

“Unfortunately, the agreement with the PBGC puts the plan’s pensioners behind Mr. Lampert’s hedge fund in the ability to get assets from Sears in any bankruptcy proceedings. Because of this, because Sears has received at least $800 million in secured loans from Mr. Lampert’s hedge fund, some of them secured by Sears properties, the Sears pension fund currently faces a $2.1 billion dollar funding obligation gap.”

If Sears ends up filing for bankruptcy, which many expect it will do, Menendez said the Federal government could be forced to cover the shortfall in Sears pension tab. Mnuchin said he would recuse himself on any PBGC vote involving Sears. That’s small comfort given who would be making the other two votes.

The third member of the PBGC would be Wilbur Ross, Trump’s nominee for Secretary of Commerce. Ross is a billionaire who led Rothschild’s bankruptcy practice for more than two decades before forming his own leveraged buyout/private equity firm known as WL Ross & Co. LLC. Last August, the SEC charged the company with improper fee charges to its investors, which included pensions and university endowments. The firm settled the charge with a promise to cease and desist from further such practices and paid a civil monetary penalty of $2.3 million.

As of 2015, PBGC paid the monthly retirement benefits for the failed pension plans of nearly 826,000 retirees in 4,800 single-employer and multiemployer pension plans. The votes on its board matter to all of us.