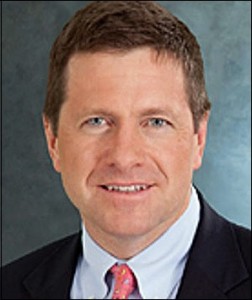 Jay Clayton, Law Partner at Sullivan & Cromwell, Has Been Nominated to Chair the SEC by Donald Trump

The rationale for Donald Trump’s selection of Jay Clayton, a law partner at Sullivan & Cromwell which has represented Goldman Sachs since the late 1800s, to be the next SEC Chairman grew exponentially fuzzier after Wall Street On Parade reviewed political donation records at the Federal Election Commission. FEC records show that 59 of Clayton’s fellow lawyers at the firm made over $900,000 in donations to the Hillary Victory Fund while one lone lawyer, Donald Korb, made two $2700 donations to Trump’s primary and general election campaign. Donations from three other lawyers at the firm, Justin Decamp ($2700), Robert Giuffra ($25,000), and Diane McGimsey ($5,000) to the Trump Victory committee came after Trump was already elected President, according to images of receipts filed with the FEC.

In addition to the more than $900,000 that went to the Hillary Victory Fund, tens of thousands of dollars more were donated by Sullivan & Cromwell lawyers to Hillary Clinton’s main campaign committee, Hillary for America.

Donors to the Hillary Victory Fund included Sullivan & Cromwell Senior Chairman, H. Rodgin (Rodge) Cohen, who donated $250,000 on May 12, 2016 and another $35,000 the following month. During the Wall Street panic and crash in 2008 and 2009, Cohen darted from representation of one failing institution to another. The Wall Street Journal dryly noted in the midst of the crisis that Cohen was “in demand because he helped mold the financial system that is now under assault. He helped draft the rules that led to the emergence of powerful national banks, waged the first hostile bank takeover in the U.S. and lobbied, in the early 1990s, to expand the Federal Reserve’s power to provide the emergency loans now being employed by the government.”

Why would President-elect Donald Trump discredit himself further by nominating a Goldman Sachs outside counsel to run the already discredited SEC when the law firm’s partners were funneling serious money into his opponent’s campaign to make sure he didn’t win. Trump has already earned the wrath of the public by stocking his administration with Goldman Sachs alumni. Steven Mnuchin, a 17-year veteran of Goldman Sachs and operator of a foreclosure mill bank has been nominated by Trump to be Treasury Secretary; Stephen Bannon, another former Goldman Sachs banker, will be Trump’s Chief Strategist in the White House; and Gary Cohn, sitting President of Goldman Sachs, has been tapped to head the National Economic Council.

In response to the so-called “populist” president placing the vampire squid and its tentacles securely around anything that smells like money in the U.S. government, protesters from New York Communities for Change stormed the lobby of Goldman Sachs’ headquarters in Manhattan yesterday and unfurled a banner reading “Government Sachs.”

Jay Clayton’s nomination for SEC Chair also raises the question of what kind of vetting is being done by Trump’s transition team – or is it simply taking its marching orders from power brokers on Wall Street, which has now become the norm regardless of which political party is in power. Not only has Clayton been Goldman Sachs’ outside counsel for years but Clayton’s wife, Gretchen, has worked at Goldman for the past 17 years, currently holding the title Vice President, according to her LinkedIn profile.

Under 18 U.S.C. § 208, the basic criminal conflict of interest statute, an executive branch employee is prohibited from participating personally and substantially in a government matter that will affect his own financial interests, as well as the financial interests of his spouse. This effectively means that the SEC Chair will have to recuse himself permanently from any matter involving Goldman Sachs, one of the largest investment banks and holders of derivatives in the world.

Martindale, the legal research firm, lists 5,517 lawyers in the U.S. that specialize in securities law. Clearly, Trump did not have to tap another lawyer with deep ties to Goldman Sachs for another powerful job in his administration.

In 2015, James Kidney, a former SEC trial attorney for a quarter of a century, penned an OpEd at Wall Street On Parade. Kidney raised concerns over the sagging reputation of the SEC and the Washington-New York nexus that has captured it. Kidney wrote:

“The SEC also has work to do to restore its reputation as an effective agency which is not captive to those it is supposed to regulate.  Along with the Department of Justice, there is reasonable skepticism that the agency was sufficiently tough on individuals who approved suspect practices on Wall Street that contributed to the 2008 financial crash.  Appointing more lawyers with a history of defending financial wrongdoers and their employers will not relieve this concern…

“The Northeast has dominated commission appointments for years – perhaps forever.  Of 19 commissioners and Commission chairmen appointed by Presidents Bush and Obama since 2000, only four were outside New York, Washington and, one, Philadelphia…The concern here is not for a sterile geographical balance.  Rather, it is that the SEC is consistently dominated by those who are fully embedded in the New York-Washington axis.  If not actively sympathetic to the needs of those the SEC is principally charged with regulating, they are cozy with these institutions.  In my 25 years with the SEC, I have no doubt that in nearly all instances these connections not only are unbroken during tenure on the Commission, but almost always lead to a very sympathetic hearing denied to the average Joe or Joanne and to lesser institutions.”

Trump is rapidly losing the confidence of even his most ardent supporters. He needs to remember that this is not about him – it’s about confidence in the decency and honesty of America and the integrity of the nation’s financial markets. 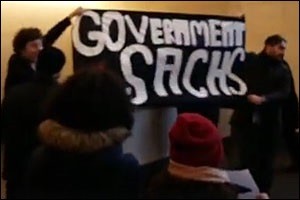 Protesters Take Over Lobby of Goldman Sachs on January 4, 2017 in Protest of Its Dominant Role in the Trump Administration