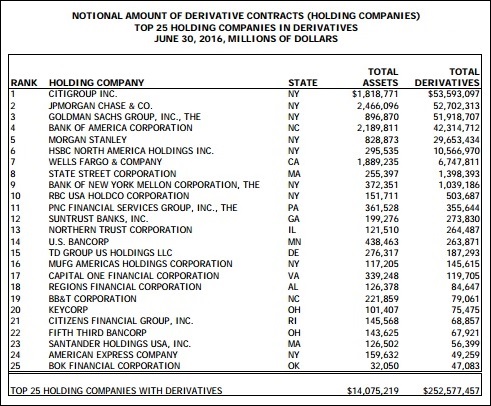 Source: Office of Comptroller of the Currency

Each quarter the Office of the Comptroller of the Currency (OCC) releases a detailed report showing the exposure to derivatives at U.S. banks. The most recent report for the quarter ending June 30, 2016 indicates that U.S. bank holding companies have a total notional amount (face amount) of derivatives of $252.6 trillion. Of that total, just five Wall Street banks hold $230 trillion or 91 percent, underscoring how massively concentrated this high risk game has become. Those five banks are: Citigroup, JPMorgan Chase, Goldman Sachs Group, Bank of America and Morgan Stanley.

There are numerous U.S. units of foreign banks on the derivatives list of bank holding companies but one name is conspicuously missing: the German giant, Deutsche Bank. Without knowing how much potential exposure U.S. banks have to Deutsche Bank in the derivatives arena, the U.S. public is left completely in the dark on just how dangerously exposed our banks are, once again, to the potential failure of a systemically interconnected counterparty. Here’s what we do know – no thanks to the OCC’s copious reports.

From late summer and into the fall of this year, Deutsche Bank was struggling in quick sand with Wall Street banks trading like they were tethered tightly to its sinking hulk. Here’s how Wall Street On Parade reported the situation on September 27:

“Yesterday, Germany’s largest financial institution, Deutsche Bank, lost 7.06 percent by the close of trading on the New York Stock Exchange. That plunge in one of the most globally-interconnected banks dragged down the shares of every major Wall Street bank yesterday: Bank of America lost 2.77 percent; Morgan Stanley declined by 2.76 percent; Citigroup lost 2.67 percent; Goldman Sachs shed 2.21 percent; and JPMorgan Chase closed down 2.19 percent. Deutsche Bank, whose shares traded at more than $120 pre-crisis in 2007, closed at $11.85 yesterday in New York and was down another 3 percent in overnight trading in Europe.”

Since October, Deutsche Bank has recovered some lost ground, closing yesterday on the New York Stock Exchange at $18.37. That trading price, unfortunately, still puts it at a share price loss of 86 percent over the past decade.

A major global bank bleeding gobs of equity value is cause enough for concern but Deutsche Bank raises other serious red flags to the U.S. banking system. According to a report released in June of this year by the International Monetary Fund (IMF), Deutsche Bank is “the most important net contributor to systemic risks.” The researchers wrote:

“Among the G-SIBs [Global Systemically Important Banks], Deutsche Bank appears to be the most important net contributor to systemic risks, followed by HSBC and Credit Suisse…The relative importance of Deutsche Bank underscores the importance of risk management, intense supervision of G-SIBs and the close monitoring of their cross-border exposures, as well as rapidly completing capacity to implement the new resolution regime.”

The report includes the graph below, indicating that a blowup at Deutsche Bank would spill out to every major Wall Street bank — banks which are holding almost half of the insured savings deposits in the U.S. – effectively mandating more massive taxpayer bailouts such as those that occurred in 2008.

In February 2005, the U.S. Treasury’s Office of Financial Research also quietly warned that U.S. banks were using foreign counterparties for their derivative trades, writing as follows:

According to a January 2016 report in Risk Magazine, Citigroup bought $250 billion of credit derivatives from Deutsche Bank in 2013. The same article indicates that Citigroup is now considered one of the top three market makers in single name Credit Default Swaps in both North America and Europe. In her book, Bull by the Horns, Sheila Bair, the Chair of the Federal Deposit Insurance Corporation (FDIC) at the time of Citigroup’s implosion in 2008, singles out credit derivatives as one of the factors leading to Citigroup’s epic crash to a penny stock. Bair writes: “It was taking losses on credit default swaps entered into with weak counterparties….”

The OCC is the dominant regulator of national banks. According to its 2015 Annual Report, it has 3,959 employees and a budget of $1.09 billion. It has bank examiners stationed at the major Wall Street banks. According to its Annual Report, its regulatory model “makes it possible for examiners, bank managers, and the board of directors to identify changes in the bank’s risk profile at an early stage, which in turn provides additional time, if necessary, to develop and implement strategies for mitigating that risk.”

That statement would clearly be more reassuring to Americans had not the largest bank in the U.S. in 2008, Citigroup, blown itself up while lying to the public and its shareholders about its exposure to subprime debt and holding more than $1 trillion in assets off its balance sheet.

The OCC’s reassurance would also be more believable had JPMorgan Chase not lost more than $6.2 billion of its depositors’ money gambling in high risk derivatives in London in 2012 – just four years after the biggest financial crash since the Great Depression and just two years after the Dodd-Frank financial reform legislation was supposed to have restored sanity to the U.S. banking system.

The OCC urgently needs to defog its lenses and defang the derivative entanglements at the biggest Wall Street banks.