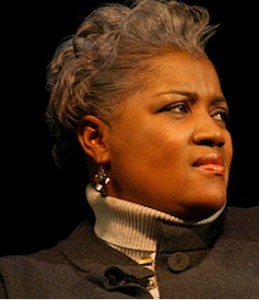 After the prior Chair of the Democratic National Committee, Debbie Wasserman Schultz, resigned in disgrace in July after Guccifer 2.0 and WikiLeaks released emails showing that the DNC had actively engaged in derailing the presidential candidacy of Senator Bernie Sanders to tip the field to Hillary Clinton, the woman who replaced Wasserman Schultz as Interim Chair of the DNC, Donna Brazile, is under the gun for putting her finger on the scale for Hillary Clinton.

On March 12, 2016, Brazile was serving in the dual capacity as a Vice Chair of the DNC and a contributor to CNN. The recent WikiLeaks release of emails shows that on that date at 4:39 p.m., Brazile sent an email to Jennifer Palmieri, Communications Director for the Hillary Clinton campaign, titled: “From time to time I get the questions in advance.”

The title clearly conveys that Brazile was referring to questions that would be asked the very next day at the March 13, 2016  CNN Democratic Town Hall at Ohio State University in Columbus. Only Clinton and Sanders were scheduled to appear on stage, as other Democratic challengers had dropped out. CNN’s Jake Tapper and TV One’s Roland Martin were to serve as moderators. Questions were to come from both of the moderators as well as Ohio voters in the audience. The Town Hall was a pivotal event, coming just two days before Democratic primaries in five states: Florida, Illinois, Missouri, North Carolina and Ohio.

Brazile’s email indicated that she was worried that Clinton might be tripped up by a question on the death penalty. Brazile wrote:

“Here’s one that worries me about HRC [Hillary Rodham Clinton].

The next evening at the Town Hall, Clinton did indeed receive a question on the death penalty.

Despite the unambiguous violations inherent in the title, text and outcome of Brazile’s email, she is flatly denying that she leaked a question to Clinton. In a prepared statement, Brazile said:

“As it pertains to the CNN Debates, I never had access to questions and would never have shared them with the candidates if I did.”

CNN now appears to be throwing Brazile under the bus. The Wall Street Journal reported last evening that CNN is denying that it leaked the question to Brazile but it believes “a broadcast partner on the town hall may have shared the question.” That now puts TV One’s Roland Martin squarely in the cross hairs.

Another leaked email shows that on January 4, 2016, Brazile had tipped the Clinton campaign to a Twitter event being planned by the Bernie Sanders’ campaign. Brazile forwarded the details she had received from Sarah Ford, Deputy National Press Secretary for Sanders to Clinton adviser Adrienne Elrod. The response from Elrod to Brazile for the good intel was: “Thank you for the heads up on this Donna.”

The DNC now has no choice but to dump Brazile as its Interim Chair if it wants to have a shred of credibility going into the November election. Article 5, Section 4 of the DNC Charter mandates the following: “The Chairperson shall be responsible for ensuring that the national officers and staff of the Democratic National Committee maintain impartiality and evenhandedness during the Democratic Party Presidential nominating process.” Brazile must go for the same reasons Wasserman Schultz had to go: overt bias to tip the scales to benefit Hillary Clinton during the primary process. (Under Wasserman Schultz, the DNC had plotted in emails to portray Sanders as an atheist, which he says he is not, and characterize his campaign as a “mess.”)

Last evening’s Wall Street Journal report also appeared to validate the legitimacy of the leaked emails. The article quoted John Podesta, Clinton’s campaign chairman, stating: “If you think you’d like all the contents of all your emails for 10 years dumped into public, think about how that feels. It doesn’t feel great.”

All of this is playing out as corporate media ignores a major Federal lawsuit that has been filed against the DNC and its former Chair, Debbie Wasserman Schultz, by Sanders’ supporters who have produced a growing mountain of evidence that Sanders was cheated out of a fair primary process. (See related articles below.)

The stakes have also been raised for a major Washington D.C. law firm, Perkins Coie. Its law partner, Marc Elias, continues to turn up in the leaked emails, and not in a good way. According to Perkins Coie’s web site, Elias is “currently general counsel to Hillary for America,” the main fundraising vehicle for Hillary Clinton’s political campaign. Elias is also one of a team of lawyers from Perkins Coie providing legal advice to the DNC. According to the Perkins Coie web site, Elias also provides legal advice to the Democratic Senatorial Campaign Committee, Democratic Congressional Campaign Committee, and Democratic Governors Associations. See: Death of Shawn Lucas Brings Attention to DNC Role of Prestigious Law Firm.