WikiLeaks Emails: Hillary Clinton Team Courted Elizabeth Warren as Early as Spring of 2014 — With Inside Help 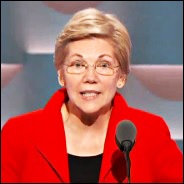 There have been many questions and much disappointment among progressives that Senator Elizabeth Warren withheld her endorsement of Senator Bernie Sanders for President when it could have potentially led to his victory in the primaries. After remaining silent on Sanders, Warren then gave an unrestrained endorsement of Hillary Clinton in June as well as in a keynote speech at the Democratic National Convention in July. The convention endorsement led to loud chants of “we trusted you” from the audience.

Yesterday, WikiLeaks released more emails that had been hacked from the email account of John Podesta, Chair of the Hillary Clinton 2016 campaign. Podesta was also a former Chief of Staff to Bill Clinton during his presidency, co-chair of the Barack Obama 2008 presidential campaign and a Counselor to Obama during his presidency.

The emails show in great detail just how aggressively and comprehensively the Hillary Clinton team pursued Elizabeth Warren for support, beginning as early as the spring of 2014 – a full year before Sanders had even declared his candidacy.

In one long email thread, long-time Clinton advisor Huma Abedin reveals on November 18, 2014 that a meeting has finally been secured with Senator Warren for December 4, 2014 and indicates the Warren camp has been less than receptive to the meeting. Abedin writes to other Clinton advisors in the email:

“Elizabeth Warren: We confirmed this meeting last week. It is set for December 4th. We were having problems with them because this was supposed to take place in June. They do not want intermediaries discussing the relationship or the potential policy differences as they feel that is happening too much. They want to have a direct conversation about economic policy.”

On the same date, November 18, 2014, and in the same thread, Abedin indicates that whenever Warren says something publicly that is “critical” to Hillary Clinton, members of the Clinton team are to call Warren down on it. Abedin also indicates that there have been ongoing discussions with “Mindy,” (Mindy Myers), Warren’s Chief of Staff at the time and implicates “Mandy” (Mandy Grunwald) as having “been helpful.” Mandy Grunwald was a top strategist for Senator Warren at that time, but according to Abedin, was providing “good intel” to the Clinton team. The leaked emails back that up. Grunwald had been an advisor to Bill and Hillary Clinton for more than two decades but it was not officially announced that Grunwald was joining the Hillary Clinton campaign until February 2015.

Abedin explains the involvement of “Mindy” and “Mandy” in her email:

“There is some background here that Im happy to share. Mandy has been helpful and will provide good intel. As for Mindy, we have frustrated her but yes she will also be very helpful. But I think everytime EW [Elizabeth Warren] says something interpreted as not being effusive enough or critical, she hears from a Neera, Gillibrand, Mandy or we suggest that Dan talk to her policy person. Basically her people are saying say enough already, lets just talk direct. We should assume meeting will leak as we are currently doing it at a hotel in Boston and I am sure they are prepared for that too. We conveyed that we are happy to meet wherever EW wants.”

It’s not a pretty picture that the Clinton camp was attempting to muzzle the free speech of a sitting Senator from Massachusetts, who owes her loyalty solely to her constituents in that state. Using Warren’s own strategist as a source of “good intel” has the same earmarks as co-opting the Democratic National Committee to further the aspirations of Hillary Clinton.

Robby Mook, the man who would become Hillary Clinton’s campaign manager, responds to the news of the meeting with Warren as follows in an email:

“I just think it would be good for HRC [Hillary Rodham Clinton] to go into the mtg with one or two objectives. And some potential action items to get EW’s [Elizabeth Warren’s] help on. Has Mindy given any intel on what EW wants/needs/hopes for? Or could Mandy provide some intel? It would just be such a big deal for this meeting to go well and have EW walk out feeling positive and on board. And then there’s the press question–not sure how high the chance of a leak is, but it would be good to have a joint plan with Mindy in the event it gets out to shape coverage. Or to proactively leak if that’s what EW wants. Not a bad thing to put out there that they had a constructive mtg.”

Indeed, the December meeting did leak to the press. It was held at the Washington, D.C. home of the Clintons, not in a hotel, according to a report in the New York Times.

In a January 6, 2015 email from Dan Schwerin, currently Director of Speechwriting for Hillary Clinton, he explained to the Clinton team how his followup meeting with a Warren adviser had unearthed the suspicion that Robert Rubin would once against be seducing the Clintons to see things his way when it came to Wall Street. Schwerin wrote:

“As follow up to HRC’s meeting with Warren, I spent about an hour and twenty minutes this afternoon with Dan Geldon, a longtime advisor to the Senator. He was intently focused on personnel issues, laid out a detailed case against the Bob Rubin school of Democratic policy makers, was very critical of the Obama administration’s choices, and explained at length the opposition to Antonio Weiss. We then carefully went through a list of people they do like, which EW sent over to HRC earlier. We have already been in touch with a number of them and I asked if he would be comfortable introducing me to the others, to which he seemed reasonably amenable. We spent less time on specific policies, because he seemed less interested in that. (Although he did express some flexibility on Glass-Steagall, said too big too fail is the bigger issue, and was open to our ideas on addressing through the tax code assuming it actually works.) He spoke repeatedly about the need to have in place people with ambition and urgency who recognize how much the middle class is hurting and are willing to challenge the financial industry. Starting with her speech at the AFL this week, EW will be pushing back against the President’s message that the economy is getting better and urging us not to get distracted by metrics like GDP and unemployment when so much else remains wrong. Over all, it was a polite and engaged but not exactly warm conversation. They seem wary – and pretty convinced that the Rubin folks have the inside track with us whether we realize it yet or not – but open to engagement and to be proven wrong…”

As Bill Clinton’s Treasury Secretary, Robert Rubin helped to advance the repeal of the Glass-Steagall Act, the depression era legislation that had separated risky investment banking from banks holding insured deposits.  Shortly thereafter, Rubin took a job at Citigroup, the Wall Street bank that pushed for the repeal and its primary beneficiary. Rubin would amass compensation of $126 million from Citigroup over the next decade as the bank set course for a financial train wreck. From 2007 through 2010, Citigroup imploded and received the largest taxpayer bailout in the history of U.S. finance, requiring $45 billion in equity infusions, over $300 billion in asset guarantees, and an unfathomable, initially secret bailout of $2.5 trillion in cumulative, below-market-rate loans from the Federal Reserve.