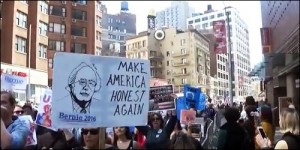 Last Thursday, the Consumer Financial Protection Bureau (CFPB) announced that Wells Fargo was paying $185 million in fines and penalties for allowing its employees to open “more than two million deposit and credit card accounts” that were not authorized by its customers. The employees were attempting to “hit sales targets and receive bonuses.” In one of the most audacious forms of bank fraud, according to the CFPB, employees actually “transferred funds from consumers’ authorized accounts to temporarily fund the new, unauthorized accounts.” This resulted in untold numbers of customers being charged for insufficient funds in their legitimate accounts or paying overdraft fees.

If anyone ever doubted Senator Bernie Sanders when he repeatedly said during campaign stops that fraud has become a business model on Wall Street, that debate is over. According to the CFPB, this conduct at Wells Fargo went on for five years. Yesterday, Fortune’s Stephen Gandel reported that the woman who headed up this division at Wells Fargo, Carrie Tolstedt, will be “walking away with $124.6 million in stock, options, and restricted Wells Fargo shares.”  Fraud is not only a business model but a road to riches for the overlords on Wall Street. Just ask John Paulson, Sandy Weill, Robert Rubin, John Reed, and Jamie Dimon.

Fake accounts are just the latest alchemy on Wall Street. Let’s not forget that Bernard Madoff was generating fake statements to thousands of clients showing that $65 billion in fake money was in their accounts as the industry’s top watchdog, the Securities and Exchange Commission (SEC), ignored the repeated warnings from whistleblower Harry Markopolos for years. But Ponzi schemers are not the only source of fake money on Wall Street. Just consider how the Federal Reserve secretly funneled $13 trillion in cumulative, below-market-rate loans to some of the most hubristic banks on Wall Street and on foreign shores during the 2007 to 2010 financial crisis. How did the Fed create that money without any appropriation from Congress? It simply pressed a button.

Wall Street is able to sustain its business model of fraud because it has fake courts to hear cases brought by its customers and employees. Wall Street is the only industry in America which universally requires by written contract that its customers and employees agree to use its private justice system prior to opening an account or getting a job. That system, called mandatory arbitration, is overseen by Wall Street’s crony self-regulator, Finra, and offers none of the protections of the nation’s taxpayer-funded courts where juries are randomly selected from a broad  base of the population, decisions are based on case law, and higher courts can hear appeals. Gloria Steinem once called the system “McJustice.”

Then there are the fake regulators of Wall Street who seamlessly move from their multi-million dollar pay packages at corporate law firms to head the SEC and Justice Department. On June 2 of last year, Senator Elizabeth Warren sent a 13-page letter to the SEC Chair, Mary Jo White, listing her abysmal failures and conflicts of interest in doing the job of a tough cop on the beat. Wall Street On Parade has also repeatedly pointed out the impossible conflicts of Mary Jo White and her husband, John White, who between them have represented every major Wall Street firm. Last year, the New York Times reported that in a span of two years as head of the SEC, Mary Jo White had recused herself from more than four dozen enforcement investigations as a result of her conflicts or those of her husband. And yet the Obama administration ignores this untenable situation as serial crimes continue to pile up on Wall Street.

The U.S. Justice Department under Attorney General Eric Holder, who served from February 2009 until the spring of 2015, was also a casebook study of conflicts of interest. Both Holder and his head of the Justice Department’s Criminal Division, Lanny Breuer, hailed from the corporate law firm, Covington & Burling, which regularly represented the biggest Wall Street banks. This is how the PBS program, Frontline, reported on the Holder/Breuer pursuit of justice on Wall Street following the largest financial crash and crime spree since the Great Depression. (The program was brilliantly titled “The Untouchables.”)

MARTIN SMITH (Frontline Producer and Moderator): We spoke to a couple of sources from within the Criminal Division, and they reported that when it came to Wall Street, there were no investigations going on. There were no subpoenas, no document reviews, no wiretaps.

Both Holder and Breuer returned to their high paying jobs at Covington & Burling after leaving the Justice Department. The law firm kept a corner office awaiting Holder’s return. During their tenure at the Justice Department, not one criminal case was brought against a major Wall Street bank or its top executives for crimes related to the 2008 crash that toppled the U.S. economy.