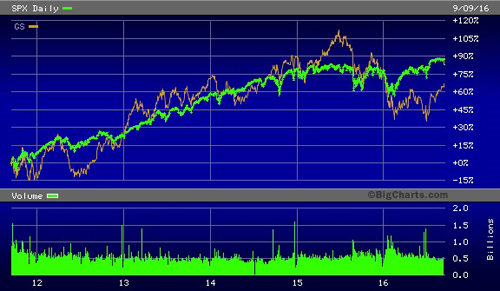 European and Asian stock markets were firmly in the red overnight as Friday’s 394 rout in the Dow Jones Industrial Average fueled global concerns.

The chart above shows how the Standard and Poor’s 500 Index of the biggest companies in America has, over the past five years, traded relatively in sync with Goldman Sachs (frequently called Government Sachs for the number of its partners it has placed in top money slots in both Democrat and Republican administrations). When there has been divergences in the chart above, the relationship has gravitated back to a converged path after a time. Inevitably, the health of the country’s banks plays a critical role in the health of the overall economy. If one ever doubted that, the Wall Street bank crash in 2008 and cataclysmic economic aftermath ended that debate. (And, yes, Goldman Sachs is now a deposit-taking bank thanks to the repeal of the Glass-Steagall Act.)

The divergence investors have seen this year in big Wall Street banks selling off as the Dow Jones Industrial Average and the S&P 500 regularly set new highs was simply unsustainable. The idea that central banks had become omnipotent Gods and could wave their magic wands to levitate markets was certain to be discredited the moment any daring soul ventured into the room and screamed that the Emperor had no clothes. That message was delivered by not one, but two, daring souls last week. Markets listened – then quickly sold off.

Jeffrey Gundlach, founder and CEO of the Los Angeles-based investment management firm, DoubleLine, made a presentation to investors last Thursday, September 8, suggesting that the Federal Reserve is determined to show that it is not being held hostage by market forces and may hike rates even as markets have become complacent that the Fed won’t raise rates this year.

The one-two gut punch came the very next day when Boston Fed President, Eric Rosengren, delivered a morning talk to the South Shore Chamber of Commerce in Quincy, Massachusetts. (See full talk at video below.) 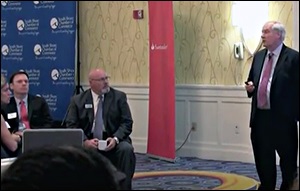 Rosengren also raised the possibility of Fed rate hikes. One of the many slides he presented to the audience raised concerns about an overheating commercial real estate market with the potential for a bust in that sector bringing down the big banks. Rosengren’s prepared remarks explained this concern as follows:

“This historical pattern illustrates the difficulty of slowing the economy to a sustainable rate without going too far and causing a recession. This problem could be compounded if delays in tightening earlier in the cycle lead to conditions that require more rapid increases in interest rates later in the cycle, risking a more pronounced slowing in growth and rise in unemployment.

The final sentence of Rosengren’s prepared text was likely the impetus for the nearly 400 point drop in the Dow on Friday. Rosengren stated:

“So if we want to ensure that we remain at full employment, gradual tightening is likely to be appropriate. A failure to continue on the path of gradual removal of accommodation could shorten, rather than lengthen, the duration of this recovery.”

Both the stock market and its long-tenured participants know that Rosengren is putting a politically-correct spin on his analysis. It simply wouldn’t do for him to say that the stock market has once again become irrationally exuberant and is likely to become even frothier before it crashes and burns and drives the U.S. economy into the ditch in a replay of 2008.

In reality, this “recovery” has as much staying power as a drooping sunflower after the first hard freeze of winter. While the nation’s newspapers appear to have gone out of their way to ignore this fact, S&P 500 profits have declined year-over-year for five consecutive quarters while overall corporate profits have declined by 4.9 percent over the last four quarters, according to the Bureau of Economic Analysis.

Lael Brainard, a dovish member of the Federal Reserve’s Board of Governors, will deliver a speech today in Chicago in early afternoon. Should a perceived dove on the Board also echo the potential need for a rate hike, not a particularly likely outcome, expect more wild gyrations in stocks.

After Dow futures had indicated a 111-point drop prior to the market open, at 10 a.m., after 30 minutes of trading, the Dow had put in a 12 point advance.