The Banking Model from Hell Has Now Killed the IPO Market 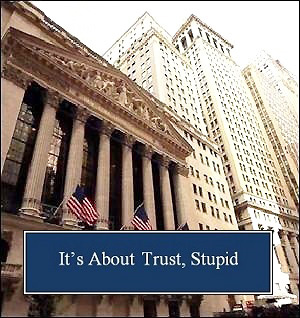 The horror stories that continue to spill out about what Wall Street banks are doing behind their cloistered walls have blurred the actual function of Wall Street: to efficiently allocate capital so that new industries can be born and thrive in America, creating new jobs and a rising standard of living for all of our fellow citizens.

In the same week that the U.S. Senate Banking committee was taking testimony that one of the biggest Wall Street banks, Wells Fargo, was opening two million unauthorized customer accounts over at least a four-year span in order to generate fees and meet daily sales quotas, the Wall Street Journal reported yesterday that just 68 new companies had been listed for public trading this year, a drop of 51 percent from the 138 companies that had gone public by this time last year.

Let’s recap what the public has learned over the past eight years about the Wall Street banking model from hell. (1) The greatest housing collapse since the Great Depression resulted from Wall Street banks muzzling their internal whistleblowers who wrote memos to management and shouted from the rafters that the banks’ mortgage loan departments were ignoring their own compliance rules and buying up tens of thousands of mortgages with wildly overstated incomes by the mortgage holder. (2) The banks then knowingly bundled these toxic mortgages into pools and paid the ratings agencies, Standard & Poor’s and Moody’s, to assign triple-A ratings to the offerings (called securitizations). (3) The banks knew these toxic mortgages would fail but they sold them to their customers as sound investments. (4) The banks also used their insider knowledge that the mortgages were going to fail to place bets (short sales) and reap billions of dollars in profits as the U.S. housing market collapsed and families were thrown into the streets.

Last December, “The Big Short” movie began to play in theatres across America, allowing millions of people to see how the unchecked, insidious greed of Wall Street had destroyed the nation’s economy along with the reputation of Wall Street, the ratings agencies and the revolving door regulators. (See video below.) The movie was based on real-life people on Wall Street and adapted from the book by the same title by author Michael Lewis, an authoritative source through his previous career on Wall Street.

Years before the movie made it to the big screen, thousands of activists around the country created the Occupy Wall Street movement to advocate for a realignment of their democracy and a radical overhaul of what Wall Street had become: a thinly disguised wealth transfer system for the one percent, being propped up by a corrupt political campaign finance system. After commanding news headlines for months and being carefully monitored by government surveillance, a brutal police eviction was orchestrated against Occupy Wall Street, journalists covering the protests and even New York City Council Members attempting to monitor what was happening. Congressman Jerrold Nadler sent a letter on December 6, 2011 to Attorney General Eric Holder at the  U.S. Department of Justice requesting that an investigation be undertaken. Nadler’s description of the events were reminiscent of a police state protecting the criminals:

“In addition to my concerns about police misconduct with respect to OWS protesters, I am especially troubled that during and after the November 15th eviction from Zuccotti Park, the NYPD aggressively blocked journalists from reporting on the incident, and in some cases, targeted journalists for mistreatment. Individuals without press credentials were also blocked from filming events, and were, in some instances, arrested apparently for taking pictures. According to news reports, and a letter from the major daily newspapers and other major news outlets and organizations representing journalists, at least ten reporters and photographers were arrested while trying to report on the incidents at Zuccotti Park. The NYPD forced journalists to leave Zuccotti Park, prevented members of the credentialed press from being present during the eviction, and used intimidation and physical force to prevent reporters and photographers from carrying out their journalistic functions. Many of those arrested were not charged with any offenses. Additionally, the City reportedly closed the airspace above the area in order to prevent news helicopters from recording the actions.”

George Freeman, Assistant General Counsel of the New York Times, wrote to the NYPD about the same events on behalf of The Times and many other newspapers and media groups. Freeman cited many examples of physical brutality against journalists. In one instance, a male photographer was photographing a man the police were carrying out of Zuccotti Park who was covered in blood.  “As he raised his camera to take a picture, two other police officers came running toward him, grabbed a metal barrier and forcefully lunged at him striking the photographer in the chest, knees and shin,” wrote Freeman. “As they did that they screamed that he was not permitted to be taking pictures on the sidewalk — the most traditionally recognized public forum aside from a park,” wrote Freeman.

After the Obama administration attempted to reassure the public that the evils of Wall Street had been remedied through his much-heralded legislation, the Dodd–Frank Wall Street Reform and Consumer Protection Act of 2010, the Wall Street horror stories actually became more outrageous. The abuses were discovered not by Federal regulators, but by Senators Carl Levin and Elizabeth Warren, or members of the press, or, in the case of JPMorgan Chase, two trial lawyers with the tenacity to write a book.

In a 2012 case that became infamously known as the London Whale, Senator Carl Levin, who chaired the U.S. Senate’s Permanent Subcommittee on Investigations, did the work the U.S. Justice Department should have done and released a 306-page report on how JPMorgan Chase had used funds from its insured depository bank, Chase, to make hundreds of billions of dollars in wild derivative gambles in London, losing at least $6.2 billion along the way. Those wild gambles happened two years after the Dodd-Frank legislation was supposed to have cleaned up Wall Street. This is how Senator Levin described JPMorgan Chase’s post-reform behavior:  “[the bank] piled on risk, hid losses, disregarded risk limits, manipulated risk models, dodged oversight, and misinformed the public.” That report came out in 2013.

In 2014, JPMorgan Chase was charged with two felony counts (which were deferred from prosecution) by the U.S. Justice Department for aiding and abetting Bernie Madoff’s Ponzi scheme. By May 20 of the following year, JPMorgan Chase had to plead guilty to another felony, this time for its involvement in rigging foreign currency trading.

Despite three felony charges, JPMorgan Chase’s Board kept Jamie Dimon in place as Chairman and CEO and actually gave him bonuses. This unprecedented hubris prompted two trial attorneys, Helen Davis Chaitman and Lance Gotthoffer to author the book, JPMadoff: The Unholy Alliance Between America’s Biggest Bank and America’s Biggest Crook, chronicling the history of crimes at the bank which had cost shareholders a staggering $35.7 billion in fines and settlements in just a four-year span. As testimony to how cowered corporate media has become when it comes to Wall Street, earlier this year Bloomberg Markets magazine editor, Joel Weber, fawned over Dimon in a Bloomberg TV interview, pushing the outrageous narrative that Dimon is all about the customer.

And, of course, there is the failed promise of Dodd-Frank to rein in the derivatives that played a pivotal role in blowing up Wall Street in 2008. Citigroup was able to have an amendment slipped into a spending bill and repeal the part of Dodd-Frank that would have forced derivatives out of the banks that are holding insured deposits. As we reported in July, Citigroup now has more derivatives than 4,701 U.S. banks combined. As of March 31, 2016, Citigroup, JPMorgan Chase, Goldman Sachs, Bank of America and Morgan Stanley now control $231.4 trillion in derivatives or 93 percent of all derivatives in the entire FDIC banking universe of 6,122 banks and savings associations.

Not only has the Obama administration and Congress failed to rein in risk on Wall Street, but it is now dramatically more concentrated and dangerous to the global banking system. And, this is the first time in history that a major Presidential candidate, Senator Bernie Sanders, has traveled the country repeating the phrase to the thousands attending his rallies that “the business model of Wall Street is fraud.”

As Wall Street scratches its head and attempts to figure out why new companies don’t want to list their shares on a Wall Street stock exchange or hire a Wall Street bank to do their stock underwriting, we have a simple message for Wall Street: “It’s about trust, stupid.”