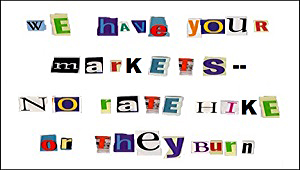 While the U.S. Senate Banking Committee was taking testimony yesterday from the Chairman and CEO of Wells Fargo bank, John Stumpf, about his $19 million in pay last year and how Carrie Tolstedt was set to retire with $120 million from the bank, despite both of them presiding over the creation of  two million bogus bank accounts and credit cards, the Federal Reserve’s Open Market Committee (FOMC) was debating the wisdom of hiking rates and setting off a temper tantrum by Wall Street banks or standing still and losing more credibility. We will know the outcome of that conversation when the FOMC makes its announcement at 2 p.m. ET today.

American banking has now evolved from too-big-to-fail to too-big-to-prosecute to too-big-and-dangerous-to-return-to-normal-monetary-policy.

Since December of 2008, the Federal Reserve has held its interest rate benchmark at zero or almost zero. On December 16 of last year, the Fed’s Open Market Committee (FOMC) raised its benchmark rate, the Federal Funds Rate, for the first time in seven years by a mere quarter of a percentage point to between 0.25 percent and 0.50 percent from its former 0.0 to 0.25 percent.

Wall Street quickly telegraphed its ransom note to the Fed about further rate hikes. By January 20, the Dow Jones Industrial Average had experienced its worst start of the new year since 1897, tanking 10.03 percent, according to a Tweet from Howard Silverblatt, the S&P Dow Jones Indices Senior Index Analyst.

By February 3, four of the derivative-bloated Wall Street banks (Bank of America, Citigroup, Goldman Sachs and Morgan Stanley) were trading at their 12-month lows during the trading day. The Fed has been walking on egg shells ever since, hinting at another rate hike but never actually getting around to the actual rate hike.

There’s another elephant in the room for the Fed – consumer confidence. Since the enactment of Social Security in 1935, it has not been allowed to invest in anything other than U.S. Treasury securities, which are backed by the full faith and credit of the U.S. government. That has not only prevented Wall Street’s bogus securities (like toxic mortgage-backed securities and accounting frauds like Enron and Worldcom) from ravaging retirement savings but it has also allowed the government to function independently of markets. The same cannot be said of the Fed since the creation of 401(k) plans tied workers’ retirement wealth, and thus their confidence as consumers, to the gyrations of the stock market. (See Wall Street’s Collapse and the Ownership Society.)

The consumer represents two-thirds of Gross Domestic Product in the U.S. Tanking stock markets and tanking 401(k) statements are a buzzkill to shopping at the mall or buying those big ticket items for the home. This is why the 401(k) and Wall Street’s hostage-taking of the Federal Reserve warrants serious consideration in Congress – which might happen were it not being held hostage by Wall Street’s campaign financing.

On September 17 of last year, Reuters reporter Ann Saphir asked Federal Reserve Chair Janet Yellen at her press conference if it might be that the Fed would never escape its zero bound range. Yellen did not instill confidence with her answer. The exchange was as follows:

Ann Saphir: “Ann Saphir with Reuters. Just to piggyback on the global considerations, as you say, the U.S. economy has been growing, are you worried that given the global interconnecting this, the low inflation globally, all of the other concerns that you just spoke about that you may never escape from this zero lower bound situation.”

How real is this possibility? Ask Japan.