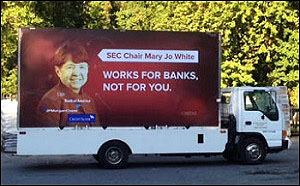 On Monday, the Securities and Exchange Commission released the details of an enforcement action it plans to bring before one of its own Administrative Law Judges against Donald (Jay) Lathen, Eden Arc Capital Management, LLC and a related hedge fund, Eden Arc Capital Advisors, LLC.

Lathen is charged with using terminally ill patients in nursing homes, who were expected to die within six months, to reap profits from issuers of bonds or Certificates of Deposits (CDs) that had a death put feature (also known as a Survivor Option or SO). The bonds or CDs can be purchased in joint name and redeemed at the full face amount if one of the owners of the joint account dies. Lathen was racking up profits by buying the bonds or CDs at a discount from the full face amount.

Naturally, the issuers of the bonds and CDs expected buyers to constitute a random pool of investors, not a ginned up pool created by a hedge fund of people slated to die within six months. (This has a familiar ring to Goldman Sachs and hedge fund titan, John Paulson, creating Abacus with bonds expected to experience negative credit events so Paulson could make $1 billion on his short bets while unknowing investors lost the same amount. Paulson skated without being charged by the SEC.)

To induce the terminally ill patients (who, let’s face it, are not always thinking clearly and may potentially be on judgment-impairing pain killers) to loan out their name, social security number, date of birth, etc. to set up joint accounts with right of survivorship, Lathen paid the patients $10,000. Lathen listed himself as the other joint owner on the accounts, even though the money actually belonged to investors in his hedge fund. (That was one of the issues the SEC nailed him on; violating the custody rule for hedge fund money.) According to the SEC, no hedge fund money was pilfered.

This story has been covered widely over the past two days in the business press. What has not been covered (because the SEC did not utter a peep about it in their statement or their enforcement action) is the role of, and the names of, the brokerage firms that allowed this flagrantly improper conduct to occur under the noses of their compliance departments and licensed branch managers who have to approve new account openings. This scheme has been going on since 2011 according to the SEC, with Lathen setting up 60 of these accounts and buying 2,350 investments, sometimes on margin, to the tune of $100 million.

One paragraph in the SEC statement should grab the attention of the U.S. Attorney’s Office for the Southern District of New York and the New York State Attorney General. It reads:

“At all times since the Fund’s inception, Lathen has maintained the unfettered ability to move securities into and out of the accounts without consent from or notice to the Participants. That ability to disregard any illusory rights of the Participants is in fact a point on which he has assured prospective fund investors: ‘Jay Lathen has full discretion to move assets from one JTWROS [joint tenancy with right of survivorship] account to another at any time.’ For example, when one Participant signed her Participant Agreement when her death was particularly imminent, Lathen funded her account by making journal transfers from other Participants’ accounts because, as Lathen explained, she ‘was very sick and we knew she was very sick. And so, there was a desire to move a significant amount of positions into her account before she perished.’ ”

This case does not belong before an Administrative Law Judge at the in-house court run by the SEC. This case belongs before a randomly selected jury in a taxpayer-funded courtroom where case law and legal precedent prevail and where the press can observe the proceedings. Here’s what at stake:

Joint-tenancy accounts are set up at broker dealers. These broker dealers are required to follow the laws that maintain the public trust in order to encourage investor confidence in our capital markets. Licensed brokers overseeing those accounts must adhere to the “know your customer rule.” Every account requires a new account form which indicates the relationship between the joint parties. It also must show the occupation of the parties. When a hedge fund executive sets up 60 accounts with non-relatives, that has to send a red flag to the compliance department of the broker dealer. From there it should be elevated to the legal department.

When a hedge fund executive deposits a check written on a corporate account into a non-corporate account, that requires a waiver from the compliance department. When assets are moved out of a joint account, both parties must sign the authorization to move the assets and it must be notarized. That clearly wasn’t done here.

Who exactly was it at these nursing homes that was providing the names of patients ready to expire in six months or less. Were they paid any financial incentive for giving out this private information? Were laws violated on the part of the nursing home personnel?

Lathen is going to find it extremely difficult to claim ignorance of the know your customer rule. According to industry records at the self-regulator, FINRA, Lathen passed his Series 7 exam (to trade securities on behalf of customers) in 1993. He passed his Principals Exam (to act as a supervisor of other licensed brokers) in 2006. FINRA records indicate that Lathen formerly worked at Citigroup Capital Markets and Lehman Brothers. (We have previously notified FINRA that retail brokers who spent a decade or longer working in the retail branch offices of Smith Barney are listed in FINRA records as having worked for Lehman Brothers, a predominantly institutional firm owned by Citigroup for a period of time. FINRA’s response was, effectively, that it has to list whatever name the corporate parent of the broker dealer has elected to change its name to.)

There’s a lot more to this story than the SEC is sharing with the investing public. It’s time for prosecutors with criminal powers to step into the void.