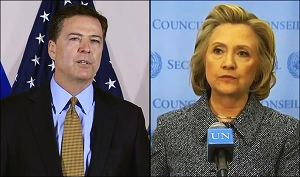 In what feels like scenes from an edgy political satire film, New York media are now alternately casting either Donald Trump or Hillary Clinton as the most dishonest presidential candidate in the annals of political history. Tragically for the country, there are legitimate grounds for making either case.

On the very eve of the Republican National Convention, where the party of Lincoln is expected to choose real estate billionaire Donald Trump as their candidate for the highest office in the United States, the New York Times ran a front page article yesterday in its highest circulation Sunday edition, characterizing Trump’s career as an “operatic record of dissembling and deception.”

Staring up at Republican convention goers in the lobbies of their Cleveland hotels, under the byline of New York Times reporter David Barstow, was the following:

“As Mr. Trump prepares to claim the Republican nomination for president this week, he and his supporters are sure to laud his main calling card — his long, operatic record as a swaggering business tycoon. And without question, there will be successes aplenty to highlight, from his gleaming golden high-rises to his well-regarded golf resorts, hit TV shows and best-selling books. But a survey of Mr. Trump’s four decades of wheeling and dealing also reveals an equally operatic record of dissembling and deception, some of it unabashedly confirmed by Mr. Trump himself, who nearly 30 years ago first extolled the business advantages of ‘truthful hyperbole.’ Indeed, based on the mountain of court records churned out over the span of Mr. Trump’s career, it is hard to find a project he touched that did not produce allegations of broken promises, blatant lies or outright fraud.”

Three days before the New York Times ran its devastating article on Trump, John Cassidy of the New Yorker reported the following:

“…over the past three months, Clinton has seen her support fall by ten percentage points in the CBS/Times poll. This decline has been accompanied by a further drop in her approval rating, which was already very low by historical standards. In the new survey, just twenty-eight per cent of respondents said that they had a favorable opinion of Clinton, a decline of five points compared with last month. The percentage of people who said they considered Clinton ‘not honest and trustworthy’ hit sixty-seven per cent, a new high.”

How could a leader possibly lead when two-thirds of the nation believes she is “not honest.” How surreal is it when a nation of 324 million people, with historical giants among its former Presidents, cannot flush out two candidates with the minimal requirement of telling the truth to compete for Commander in Chief, leader of the free world and uniter of a country torn by hatred and serial mass killings? The general assessment is that we can thank the amoral corporate financing of candidates, against which only billionaires can compete, for our nation’s race to the bottom of the political dung heap.

The New York Times endorsed Hillary Clinton for President early, on January 30 of this year, calling her “one of the most broadly and deeply qualified presidential candidates in modern history.” Eleven days before that endorsement, the New York Times incorrectly reported that Hillary Clinton was not “a subject of the investigation” by the FBI into the handling of Top Secret material. In fact, she was a target of a criminal investigation by the FBI.

Not everyone at the New York Times is in agreement about Clinton’s qualifications to lead the nation forward. Five days after FBI Director Comey held his press conference on July 5 and eviscerated Hillary Clinton’s false statements to the public, columnist Maureen Dowd wrote the following in the Times’ Sunday edition:

“On Tuesday, after Comey managed to make both Democrats and Republicans angry by indicting Clinton politically but not legally, Barry [President Obama] and Hillary flew to Charlotte, N.C., for their first joint campaign appearance. Obama was left in the awkward position of vouching for Hillary’s ‘steady judgment’ to run an angry, violent, jittery nation on the very day that his F.B.I. director lambasted her errant judgment on circumventing the State Department email system, making it clear that she had been lying to the American public for the last 16 months.”

“…in the view of the FBI, Hillary Clinton is a blundering fool who compromised national security but not a provable arch-criminal. This is not what the country needs in a president. ‘Dangerously negligent but never indicted’ is an extremely low bar to set for the leadership of the free world. And it kills Hillary’s argument that she would be a highly skilled chief executive.”

Reason TV, which is affiliated with the Reason Foundation, a promoter of libertarian ideas like free markets and limited government (the formula that crashed the U.S. financial system in 2008, leaving much of the U.S. and globe an economic basket case), released a devastating video contrasting Hillary Clinton’s public statements to the American people versus FBI Director Comey’s smack down of those serial untruths. (See video below. Wall Street On Parade does not endorse the advertisements affixed to this video but has verified the content of the video itself.)

It is still not too late for the Democratic Party to show some courage and resolve and put the interests of the United States of America first. Democrats have a viable candidate for President, Senator Bernie Sanders, who has served without scandal in the U.S. Congress for a quarter century and has repeatedly polled ahead of Donald Trump. Yes, Sanders is a Democratic Socialist, a platform that the DNC’s big corporate donors find untenable since it rests on programs to address the unprecedented wealth and income inequality in the U.S. and to rebalance the power from corporations to the people.

Sanders is a trusted, sincere speaking statesman whom this nation is going to need in the days and months ahead as economic stresses spill over into anger in the streets. Sanders can use his bully pulpit in the Oval Office to move the country toward a fairer, more just, society. Frankly, outside of FDR, there’s no one more deeply qualified for the job that lies ahead in the Oval Office at this critical juncture in time.