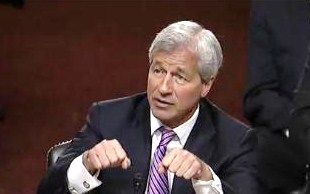 Jamie Dimon Testifying at a Senate Banking Hearing on June 13, 2012.

A mere three months after JPMorgan Chase and three of its competitors (Citicorp, Barclays and the Royal Bank of Scotland) pleaded guilty to a felony charge of conspiring to rig foreign currency trading and paid criminal fines totaling over $2.5 billion, the CEO of JPMorgan Chase, Jamie Dimon, began meeting in secret with his competitors in the asset management field.

On February 1 of this year, the Financial Times reported that “secret summits” had been held beginning in August 2015 between “asset management bosses” including Jamie Dimon, Abby Johnson of Fidelity, Larry Fink of BlackRock, and Tim Armour of Capital Group. The article went on to report that Dimon and Warren Buffett had convened the sessions at JPMorgan’s headquarters in New York to discuss “a statement of best practice on corporate governance.”

Secret meetings between competitors, regardless of what they are said to be discussing, is a serious no-no under U.S. antitrust law. A company like JPMorgan Chase, that was charged by the U.S. Justice Department in 2014 with two deferred prosecution felony counts for its egregious conduct in the Bernie Madoff Ponzi scheme and hit again the next year with the felony count in the foreign currency conspiracy is skating on very thin ice. (It should be noted that under Jamie Dimon’s leadership, JPMorgan Chase received its only felony counts in the bank’s century old history. That should tell the public something about how things have changed in American banking culture.)

Two trial lawyers, Helen Davis Chaitman and Lance Gotthoffer, have written a book and set up a web site to call the public’s attention to JPMorgan’s mob-like activity. The lawyers write: “In the past four years alone, JPMorgan Chase has paid out $35,735,254,670 in fines and settlements for fraudulent and illegal practices.” In one chapter of the book, they compare JPMorgan Chase to the Gambino crime family and recommend that it be prosecuted under the Racketeer Influenced and Corrupt Organizations Act (RICO).

If these meetings were genuinely about crafting “best practice on corporate governance” why did they commence in secret? Why were they not commenced at one of the official financial industry trade associations like the Financial Services Forum or the Securities Industry and Financial Markets Association (SIFMA), which says it is “the voice of the nation’s securities industry.”

According to guidelines published by various trade associations and law firms, the following rules must be followed when conducting meetings between competitors to avoid the perception, or actual charges, of antitrust violations:

– Meetings must be regularly scheduled and should never be secret.

– A properly designated Chairman shall prepare and follow a formal agenda which       should be reviewed in advance by legal counsel.

– Legal counsel should be present at all meetings.

– Formal written minutes of meetings should be taken and archived.

– Properly instituted bylaws should be followed.

– A Board of Directors should be properly instituted.

– Any company meeting the requirements of the bylaws should be allowed membership in the group.

Yesterday, the New York Times’ Andrew Ross Sorkin wrote about the secret meetings, providing an altruistic spin. Despite writing in the article that participants “had arrived for a meeting that they were told they would absolutely have to keep secret,” Ross Sorkin does not once raise the antitrust issue in the article. He does note however that at some point the group was expanded beyond just asset managers to include “the chiefs of General Motors, General Electric and Verizon,” although he does not make it clear if these individuals actually attended meetings or just participated in conference calls and email exchanges.

The group has launched a web site that includes no mention of a Board of Directors, bylaws, minutes, legal counsel or any of the other mandates to comply with U.S. antitrust laws. It has published its recommendations on corporate governance principles and says in a letter that:

“More than 90 million Americans own our public companies through their investments in mutual funds, and millions more do so through their participation in corporate, public and union pension plans. These owners include veterans, retirees, teachers, nurses, firemen, and city, state and federal workers. We owe it to all of them – and to all our shareholders and investors who have entrusted us with their savings – to get this right.”

The governance principles are signed by billionaires Jamie Dimon and Warren Buffett and 11 other one percenters. There is no mention that any veteran, retiree, teacher, nurse, fireman, municipal worker or consumer rights group (that the authors correctly note are impacted by these decisions carved out in secret) sat in on the meetings or had input into the fashioning of the principles.