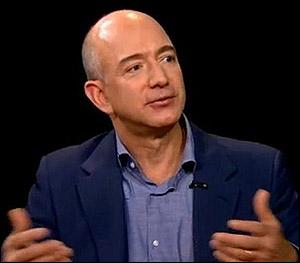 Jeffrey Bezos, Billionaire Buyer of the Washington Post in 2013

An article in the Washington Post yesterday continued the paper’s unrelenting efforts to marginalize Senator Bernie Sanders and his effort to press forward on his call for a political revolution in America.  The Post article brandished its most preposterous cudgel yet: the cost of Senator Sanders’ continuing protection by the Secret Service, which it suggested was a drain on taxpayers. Calling Sanders the “now-vanquished Democratic presidential candidate,” the Post’s John Wagoner laments that even though “Hillary Clinton has clinched the party’s nomination,” Sanders is still receiving Secret Service protection which could be costing taxpayers more than $38,000 a day.

In fact, Clinton hasn’t clinched anything until there is an official vote taken at the Democratic National Convention in Philadelphia, July 25-28, no matter how much corporate media might wish otherwise. And since there has never been a Presidential candidate like Clinton, who is under an active criminal FBI investigation for violating State Department policy and transmitting classified material over a private server in her home, anything is possible before the July convention — or thereafter.

To put that $38,000 a day Secret Service cost into perspective, in a report released this past February by the non-partisan investigative arm of Congress, the Government Accountability Office, the U.S. government flunked its audit for 2015 because “34 percent of the federal government’s reported total assets as of September 30, 2015” could not be reconciled. That 34 percent represents $1.08 trillion – perhaps a larger worry than spending $38,000 a day to safeguard a man now regarded as a national treasure and the only Presidential contender with any hope of restoring the confidence of young people in their government and the political process.

What was particularly outrageous about the Post writer raising the cost issue of a security detail is that it came at the end of a week when an elected member of the British Parliament, Jo Cox, was brutally murdered over her political beliefs and at a time in the U.S. when attacks by assault-weapon toting mass murderers are becoming a regular occurrence.

If this was an isolated smack down of Sanders at the Washington Post, it wouldn’t trigger speculation about an underlying agenda. But it comes on the heels of an endless series of efforts to marginalize Bernie Sanders at the newspaper.

On March 8, the media watchdog, FAIR, reported that in “what has to be some kind of record,” the Washington Post had published “16 negative stories on Bernie Sanders in 16 hours,” a period which included the “crucial Democratic debate in Flint, Michigan.”

The FAIR report noted that billionaire Jeff Bezos, the CEO of Amazon, the online retailer, had purchased the Washington Post in 2013. It called attention to reasons Bezos might wish to send another establishment candidate to the White House:

“…Bezos has enjoyed friendly ties with both the Obama administration and the CIA. As Michael Oman-Reagan notes, Amazon was awarded a $16.5 million contract with the State Department the last year Clinton ran it. Amazon also has over $600 million in contracts with the Central Intelligence Agency, an organization Sanders said he wanted to abolish in 1974, and still says he “had a lot of problems with.”

John Spaid of TheStreet.com says Amazon (like the government’s own books) is known “for its fairly opaque accounting practices.” Spaid also says the success of  Amazon’s stock “has been based on slim or nonexistent profits” and punctuates his overall analysis with this:  “Amazon’s unusual and obtuse financial presentations should be a very bright red flag to all investors….”

In January of this year, the Editorial Board of the Washington Post launched an assault on the accuracy of Senator Bernie Sander’s talking points, calling them “his own brand of fiction.” The editorial specifically called out Sanders for creating the “tale” that Wall Street is playing a pivotal role in why “working Americans are not thriving.” It says Sanders needs a “reality check” because “Wall Street has already undergone a round of reform, significantly reducing the risks big banks pose to the financial system.”

It’s actually the Washington Post’s editorial board that needs a reality check. It’s among a tiny minority that thinks Wall Street risks have been adequately constrained. A poll conducted by Greenberg, Quinlan Rosner Research in mid 2014 found that nearly 90 percent of voters believe the Federal government has failed to rein in Wall Street. The poll was conducted among voters across the political spectrum. The poll also found that 64 percent of all voters and 62 percent of voters that own stock believe that “the stock market is rigged for insiders and people who know how to manipulate the system.”

Just this past April, the Wall Street Journal reported that exit polls following the New York primary found that 63 percent of Democrats and 49 percent of Republican voters “said Wall Street hurts the economy more than it helps.” And that’s in a state that Wall Street calls home.

It should also be noted that Bezos has multiple reasons to want to kick to the curb any candidate that poses a threat to his financial enablers on Wall Street. Wall Street banks have underwritten over $8 billion of Amazon debt offerings. The same banking behemoths have analysts on their payroll that can make or break a company with a buy or sell stock rating. For example, Morgan Stanley has been an underwriter of Amazon debt dating back to at least 1999. Last November, Morgan Stanley’s research analysts suggested that Amazon’s stock price could reach $800 (the stock opened at $663.25 that day). Morgan Stanley reaffirmed its “overweight” rating on the stock. Morgan Stanley, which took over the retail brokerage firm Smith Barney, has over 15,000 retail brokers that can, and frequently do, push the stocks that the firm is recommending.

“Today, Meeker, 41, has become something else entirely: the single most powerful symbol of how Wall Street can lead investors astray. For the past year, as Internet stocks have crumbled and entire companies have vaporized, Meeker has maintained the same upbeat ratings on her companies that characterized her research reports in the glory days. For instance, of the 15 stocks Meeker currently covers, she has a strong buy or an outperform rating on all but two. Among the stocks she has never downgraded are Priceline, Amazon, Yahoo, and FreeMarkets – all of which have declined between 85% and 97% from their peak. For this she has been duly pummeled in the press, accused of cheerleading for Morgan Stanley’s investment banking clients.”

In one year alone, 1999, Morgan Stanley paid Meeker $15 million.  But after all the hand-wringing back then about corrupted analysts on Wall Street, the same practices continue today. President Obama’s Dodd-Frank reform legislation left Wall Street banks able to underwrite stocks and bonds for their corporate clients while their analysts put buy ratings on the company’s stock.  One can also be assured that Hillary Clinton, who has promised to follow in the footsteps of Obama, won’t be touching this sacred cash cow on Wall Street either.

Amazon stock is also traded in dark pools (unregulated quasi stock exchanges) run by major Wall Street banks which have participated in underwriting debt deals for Amazon. This practice is allowed by the Securities and Exchange Commission (SEC). The SEC is headed by Mary Jo White, who came to the SEC from one of Wall Street’s major go-to law firms, Debevoise and Plimpton. Between White and her husband, John White, who works for law firm Cravath, Swaine & Moore LLP, every major Wall Street bank has been a client of one or the other’s firms. Under Federal regulations, the conflicts of the spouse become the conflicts of the Federal agency head. None of this stopped President Obama, who enjoyed heavy campaign funding from Wall Street law firms, from nominating Mary Jo White to lead the Wall Street watchdog.

The Washington Post’s January editorial stated that “Mr. Sanders’s success so far does not show that the country is ready for a political revolution.”  In fact, his success shows exactly that. As Senator Sanders told his supporters in a live-streamed video (see below) last Thursday evening:

“During this campaign, we won more than 12 million votes. We won 22 state primaries and caucuses. We came very close – within 2 points or less – in five more states. In other words, our vision for the future of this country is not some kind of fringe idea. It is not a radical idea. It is mainstream. It is what millions of Americans believe in and want to see happen…

Sanders’ rallies around the country frequently had in excess of 5,000 people in attendance and at times, over 20,000. Hillary Clinton’s rallies were mostly attended by hundreds – not thousands — of supporters.