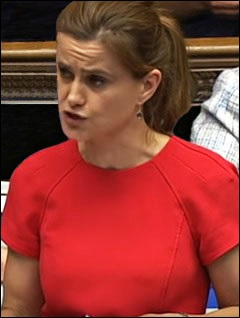 Jo Cox, Member of Parliament, Was Murdered on Thursday, June 16, 2016; U.S. Stocks Rallied on the News

The U.S. stock market was mired in red ink yesterday morning with every major Wall Street bank trading down on news that multiple polls in Britain were showing that a majority of citizens were in favor of the United Kingdom withdrawing from the European Union (EU). A referendum vote on the issue is to be held next Thursday.

Then, at 12:17 p.m. New York time yesterday, Bloomberg News printed the following headline: “U.K. Lawmaker Jo Cox Is Murdered, Silencing Brexit Debate.” Cox was a Member of Parliament from the Labour Party who was an advocate for the U.K. remaining in the EU. Cox, a mother of two children, was shot and stabbed by a man said to be in favor of Brexit, the term for a British exit from the EU. On the news of her death, which fueled the market perception that it would dampen the zeal to leave the EU, the pound and euro rallied along with the Dow Jones Industrial Average and Wall Street bank stocks.

After the U.S. market closed, with the Dow up 92 points on the day, an abrupt turnaround from morning trading, James Mackintosh penned an article at the Wall Street Journal taking note that markets can appear “callous,” but justifying the market reaction to the death of Cox with this line of reasoning:

“But one of the points of markets is that they are amoral. Not immoral — although much of the wrongdoing uncovered after the financial crisis certainly was — but unconcerned with morality at all. They are deliberately unfeeling, heartless and unsympathetic, because they exist to balance out millions of individual views in order to allocate capital and assess risk.”

This is simplistic and naively wrong on so many levels. Let’s start with the U.S. market’s ability to “allocate capital and assess risk.” Here’s what Ron Chernow correctly had to say on this subject back in 2001 in the New York Times:

“Let us be clear about the magnitude of the Nasdaq collapse. The tumble has been so steep and so bloody —  close to $4 trillion in market value erased in one year — that it amounts to nearly four times the carnage recorded in the October 1987 crash.” Chernow likened the NASDAQ stock market to a “lunatic control tower that directed most incoming planes to a bustling, congested airport known as the New Economy while another, depressed airport, the Old Economy, stagnated with empty runways. The market functioned as a vast, erratic mechanism for misallocating capital across America.”

The U.S. stock market at that time was corrupted by crooked research analysts at the still crooked Wall Street mega banks who were pumping out buy recommendations to the public while internally calling the stocks “crap,” and debating how to put lipstick on the pigs they were peddling.

Instead of cleaning up this cesspool of corruption that was misallocating trillions of dollars of capital, a few wrists were slapped and the road was paved for the next epic misallocation of capital – the subprime debt, synthetic derivatives, off-balance-sheet black hole adventure, otherwise known as the financial crash of 2008, which took down the entire U.S. economy.

Bundling up junk debt and paying a ratings agency to wink and deliver a triple-A rating is not efficient allocation of capital – it is a fraud on the market. But until subprime blew up, the dumb tourist market traded it as triple-A paper. That’s not an efficient market that knows how to allocate capital.

It’s also preposterous to suggest that we can have a stock market made up of major companies whose executive ranks are populated with liars and crooks, where corporate lawyers are also liars and crooks, and this won’t inject chronic disease into the efficient market theory.

Tobacco company stocks have been part of the U.S. stock market for most of its existence. In 1999, the United States sued the largest tobacco firms under the Racketeer Influenced and Corrupt Organizations Act (RICO).  The government’s complaint said that the tobacco companies engaged in a four-decade conspiracy to mislead the public about the dangers of smoking and unconscionably targeted the youth market as “replacement smokers.”

We call that immoral – not amoral.

Following a nine-month bench trial, 14,000 exhibits, live testimony from 84 witnesses and written testimony from 162 witnesses, on August 17, 2006, Judge Gladys Kessler of the U.S. District Court for the District of Columbia issued a 1,683 page opinion, writing as follows:

“It is about an industry, and in particular these Defendants, that survives, and profits, from selling a highly addictive product which causes diseases that lead to a staggering number of deaths per year, an immeasurable amount of human suffering and economic loss, and a profound burden on our national health care system. Defendants have known many of these facts for at least 50 years or more. Despite that knowledge, they have consistently, repeatedly, and with enormous skill and sophistication, denied these facts to the public, to the Government, and to the public health community. Moreover, in order to sustain the economic viability of their companies, Defendants have denied that they marketed and advertised their products to children under the age of eighteen and to young people between the ages of eighteen and twenty-one in order to ensure an adequate supply of ‘replacement smokers,’ as older ones fall by the wayside through death, illness, or cessation of smoking. In short, Defendants have marketed and sold their lethal product with zeal, with deception, with a single-minded focus on their financial success, and without regard for the human tragedy or social costs that success exacted.”

Judge Kessler also had this to say about the individuals that were assigned the duty of making corporations uphold the law — the corporate lawyers:

Today, two of Wall Street’s largest banks, JPMorgan Chase and Citigroup, which house both investment banks and commercial banks filled with the insured deposits of savers, are mandated to efficiently allocate capital in order to build a growing economy, finance deserving new businesses and build a strong labor market that supports an improving quality of life. But units of JPMorgan Chase were hit with felony charges by the U.S. Justice Department in both 2014 and 2015, which it admitted to. A unit of Citigroup admitted to a felony charge in 2015. For the first time in their century old existence, two major U.S. banks are felons – after participating in the greatest market swindles in history in the lead up to the 2008 crash.