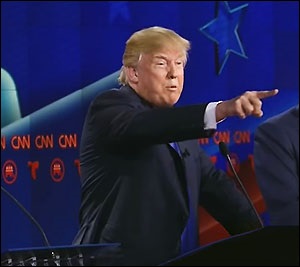 Donald Trump’s brash, unfiltered mouth, which he is leveraging to stay in the media spotlight 24/7, may be taking root in broader society. On Wednesday, Jamie Dimon, the Chairman and CEO of the largest bank in the U.S., with buttoned-down, old money clients, called a fellow banker a “jerk” during an on-air conversation at CNBC.

Dimon’s school boy rhetoric was directed at Camden Fine, President and CEO of the Independent Community Bankers Association, who has accused Dimon of attempting to “link the interests of megabanks to community banks in order to mitigate the political heat” that is on the Wall Street behemoths.

After Dimon’s “jerk” insult on CNBC, Fine said in a statement to CNBC that Dimon’s remarks “reflect Wall Street’s inability to take responsibility for the economic crisis it caused and the taxpayer-funded guarantee against failure it continues to enjoy.”

Fine went further in a phone interview on Wednesday with CNNMoney, stating:

“What is this, junior high school? To be called a jerk by Jamie Dimon — I take as a badge of honor. It means he has no good argument to our response. So he resorts to name calling, and in my view that is the last refuge of small minds.”

Dimon has never been a paragon of etiquette but calling an industry head a “jerk” on TV sets a new low, even for him. In 2013, Dimon appeared to brag about his obscene pay when he insulted Mike Mayo, a banking analyst, at JPMorgan’s own investor conference. In response to a question from Mayo about whether higher capital at rival bank UBS might create a competitive headwind for JPMorgan, Dimon responded:

Putting his wealth on display also seemed to be the theme of Dimon’s 2013 Christmas card which garnered a Stephen Colbert skit and this rebuke from Lucy Kellaway of the Financial Times:

“…for me, the ostentation wasn’t in the ludicrously wealthy interior, nor in the gorgeous slim figures in their casually ripped jeans. It wasn’t in the fabulous dentistry of Dimon’s womenfolk as they roar with laughter playing a riotous game of indoor tennis, blithely oblivious of the priceless pottery vases, and the huge canvas that looks like a Jackson Pollock.

“I don’t mind bankers being really rich. So much money is vulgar and undeserved, but it does not upset me. It is this gratuitous (and probably phoney) display of over-the-top happiness that sets my less than perfect teeth on edge.”

Even the editorial page writers at the Wall Street Journal are showing signs of  adolescent brevity. An editorial in yesterday’s paper called Hillary Clinton  “lousy.” The context was as follows:

“Mrs. Clinton has proven to be a lousy candidate, unappealing even to millions of Democrats. Mr. Trump is probably the weakest candidate Republicans could nominate, yet could Mrs. Clinton be the one Democrat who could lose to Mr. Trump? Maybe Democrats should consider a contested convention.”

In terms of wealth and income inequality, the U.S. has already devolved back to the 1920s. Now our very language is devolving. Yesterday, at Mother Jones, David Corn explained in graphic detail where devolution in civil discourse inevitably leads.

Corn revealed that Donald Trump’s former butler, whom the New York Times profiled this past March as now living on Trump’s Florida estate, Mar-A-Lago, and functioning as its historian, has been posting vulgar, racist insults against President Obama on his Facebook page, including death threats.

A Trump spokesperson denied that the Facebook poster, Anthony Senecal, works for Trump but was silent on whether he continues to reside at his Palm Beach estate. In March, the Times wrote as follows:

“Mr. Senecal tried to retire in 2009, but Mr. Trump decided he was irreplaceable, so while Mr. Senecal was relieved of his butler duties, he has been kept around as a kind of unofficial historian at Mar-a-Lago.”

The Times feature on Senecal included a current photograph of him at the Mar-A-Lago estate in March.

On Wednesday, the same day that Dimon was calling a fellow banker a jerk on TV, Trump’s estate historian had this to say about the President of the United States on his Facebook page, according to Corn:

“To all my friends on FB, just a short note to you on our pus headed ‘president’ !!!! This character who I refer to as zero (0) should have been taken out by our military and shot as an enemy agent in his first term !!!!! Instead he still remains in office doing every thing he can to gut the America we all know and love !!!!! Now comes Donald J Trump to put an end to the corruption in government !!!! The so called elite, who are nothing but common dog turds from your front lawn are shaking in their boots because there is a new Sheriff coming to town, and the end to their corruption of the American people (YOU) is at hand …”

Corn also reported that Senecal had posted the following on his Facebook page on May 23, 2015:

“I feel it is time for the SECOND AMERICAN REVOLUTION !!!!! The only way we will change this crooked government is to douche it !!!!! This might be the time with this kenyan fraud in power !!!!! …[W]ith the last breath I draw I will help rid this America of the scum infested in its government–and if that means dragging that ball less dick head from the white mosque and hanging his scrawny ass from the portico–count me in !!!!!”

The New York Times is now reporting that the Secret Service is looking into the death threats. Foreign newspapers have picked up the story, adding further to America’s embarrassment abroad and the shaking of heads by our allies.