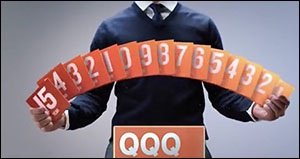 We’ve been at the gym recently working off those pounds that come from spending too much time in a chair researching the serial crimes on Wall Street. The equipment at the gym is conveniently equipped with cable news and a commercial that is airing regularly on the business news channel, CNBC, caught our eye.

“The power of 100 of the world’s top companies. The power of a proven 15-year track record.”

We were first inclined to giggle at a market index claiming a “15-year” track record. The Dow Jones Industrial Average, another stock market index, has been around since May 26, 1896 – a potentially more meaningful 120 years.

The web site for the PowerShares QQQ, the subject of the commercial, explains that it’s an Exchange Traded Fund (ETF) based on the Nasdaq-100 Index, noting that the “Index includes 100 of the largest domestic and international nonfinancial companies listed on the Nasdaq Stock Market based on market capitalization.”

What we could not find within the commercial or the front page of the web site for the PowerShares QQQ was anything like the chart posted below. That’s a chart courtesy of BigCharts.com, part of Dow Jones & Co., which depicts part of the “15-year track record” of the Nasdaq 100 index – namely, the part of the track record where it crashed. Following the burst of the infamous dot.com bubble, from its peak on March 27, 2000 to its trough on October 7, 2002, the Nasdaq 100 lost over 80 percent of its value. To some minds, that might constitute more than a pesky detail when talking about “proven” track records.

Then there were the two huge accounting frauds within the Nasdaq 100.

In 2002, WorldCom was removed from the Nasdaq 100 amidst one of the largest accounting frauds in U.S. history. It was eventually determined that the company had overstated its assets by as much as $11 billion. Its CEO, Bernie Ebbers, was sentenced to a 25-year prison term while its CFO, Scott Sullivan, received a 5-year prison term. Other WorldCom executives also went to jail. In July 2002, the company filed the largest bankruptcy at that point in U.S. history. The company’s common stock, at one point worth $100 billion in market cap, became worthless.

Adelphia Communications was also removed from the Nasdaq 100 in 2002. According to the SEC, the company, at the direction of members of the Rigas family, “(1) fraudulently excluded billions of dollars in liabilities from its consolidated financial statements by hiding them on the books of off-balance sheet affiliates; (2) falsified operations statistics and inflated earnings to meet Wall Street’s expectations; and (3) concealed rampant self-dealing by the Rigas Family, including the undisclosed use of corporate funds for Rigas Family stock purchases and the acquisition of luxury condominiums in New York and elsewhere.”

The next time you’re at the gym watching an investment commercial – you might want to do your own homework on what it’s touting.