Scrooge Yellen: Why Does the Fed Chair Need to Speak at the Start of Memorial Day Weekend? 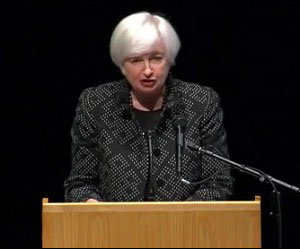 Typically, the bond market would be closing at 2:00 p.m. today, leaving the stock market rudderless and thinly traded. Typically, tens of thousands of Wall Street traders would have nothing more taxing than visions of barbecues and beaches and beer dancing about in their heads and would be sprinting out of the office to the Hamptons or Fire Island or Montauk as soon as the bond market closes at 2 p.m. But today is not typical thanks to Scrooge Yellen who will be speaking around 1:15 p.m today. This fact is furrowing brows on Wall Street and forcing traders to hang around to see what market-moving nuggets might be dropped by the petite central banker in chief.

In reality, it’s Harvard that’s messing up the early holiday exodus on Wall Street. Harvard is giving Yellen the Radcliffe Medal for her “transformative impact on society.” (That likely means, “thank you Chair Yellen for using a melon scoop instead of an ice cream scoop to dish out rate hikes.”) Gregory Mankiw, an Economics Professor at Harvard, will interview Yellen on stage as part of the award presentation.

Hedge fund guys and high frequency traders have a nasty habit of hanging around to exploit market-moving news in thinly traded markets ahead of a holiday weekend. More market moving news came out at 8:30 a.m. this morning when the Commerce Department provided its second read on first quarter GDP, stating that it grew at a faster 0.8 percent annual rate versus its earlier calculation of 0.5 percent. Either of those numbers is bleak news for an economy that has been hovering at 2 percent GDP or lower since the Wall Street crash of 2008 and has effectively sentenced millions of job-seeking young adults and over-indebted college grads to be indefinitely bound to their parents’ homes for lack of an adequate income.

Yellen’s talk, limited though it may be, will follow “personal reflections” by former Fed Chair Ben Bernanke, who immediately preceded Yellen as head of the Federal Reserve.

The comments from the current and former U.S. central bankers come just one day after the International Monetary Fund (IMF) stunned economists worldwide with an article in its flagship magazine under the title: “Neoliberalism: Oversold?” which appeared to be hurling an insult directly at the U.S.

The word “neoliberalism” has increasingly become a pejorative term for a rigged economic model that churns out billionaires while leaving the world’s masses in poverty. Naomi Klein quickly Tweeted her take on the article, writing: “IMF admits neoliberalism is a failure. So all the billionaires it created are going to give back their money, right?”

The article, authored by lead writer, Jonathan Ostry, Deputy Director of the IMF’s research department, along with Prakash Loungani and Davide Furceri, sets up its own definition of neoliberalism this way:

“The neoliberal agenda—a label used more by critics than by the architects of the policies — rests on two main planks. The first is increased competition — achieved through deregulation and the opening up of domestic markets, including financial markets, to foreign competition. The second is a smaller role for the state, achieved through privatization and limits on the ability of governments to run fiscal deficits and accumulate debt.”

Let’s expand a little on that: what financial deregulation did for the U.S. was to create the largest economic catastrophe in 2008 since the Great Depression of the 1930s, leaving millions of Americans without jobs, wiping out their savings and costing them their homes. As Presidential candidate Senator Bernie Sanders regularly reminds us:

“There is something profoundly wrong when the top one-tenth of one percent owns almost as much wealth as the bottom 90 percent;

“There is something profoundly wrong when 58 percent of all new income since the Wall Street crash has gone to the top one percent.”

(That, frankly, sounds more like an enforced looting system than an economic model. But we digress.)

The IMF article goes on to tiptoe delicately around the enormity of the failure of neoliberalism, writing:

The best way to understand what’s going on today is to watch the trailer for the Robert Reich documentary, “Inequality for All,” that we’ve embedded below. It’s not a coincidence that the two greatest periods of income inequality in America occurred in 1928 and 2007 – just on the eve of the two greatest Wall Street crashes in history: 1929 and 2008. In both periods, giant Wall Street banks were allowed by their regulators to suck in the savings deposits of the nation and use those deposits to wildly speculate in stocks and derivatives and drive the markets into an unsustainable bubble. The tricks used by the Wall Street insiders made them billionaires as the rest of the country paid the price. We are still paying the price as today’s GDP number makes clear.

When the history books look back on this era, the overarching and nagging question will be, what took Americans so long to wake up.