Shelby’s Senate Banking Committee Has No Pretense of Fairness 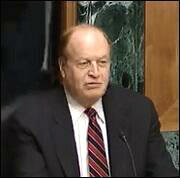 Tomorrow the Senate Banking Committee, chaired by Senator Richard Shelby since the Republicans took control of the Senate in the 2014 midterms, will hold a hearing on “Assessing the Effects of Consumer Finance Regulations.” That title can be easily translated into “How to Achieve the Lobbyists’ Dream Wish of Killing Off the Consumer Financial Protection Bureau and Its Embarrassing Ability to Perpetually Show How Deregulation of the Financial Services Industry Has Led to Wholesale Looting of the Public.”

Senator Shelby does not even make a pretense of presenting a balanced slate of witnesses at these hearings and one has to question why the Ranking Member, Senator Sherrod Brown, a Democrat, is not holding Shelby’s feet to the fire on this issue.

Rounding out tomorrow’s panel is Todd Zywicki, a senior scholar at the rabidly anti-regulatory Mercatus Center and a Law Professor at the related George Mason University. According to SourceWatch,  the Mercatus Center “was founded and is funded by the Koch Family Foundations,” the nonprofits set up by the Koch brothers to sluice money into a sprawling maze of think tanks, corporate front groups, and university economic departments. SourceWatch reveals that “the Koch family has contributed more than thirty million dollars to George Mason, much of which has gone to the Mercatus Center.”

One of the luminaries of Mercatus Center fame is Wendy Lee Gramm, whom the Mercatus Center archives credits with setting up its “Regulatory Studies Program” in 1999. Gramm was also the former Chair of the Commodity Futures Trading Commission (CFTC) from 1988 to January 1993, which took a hands off approach to regulating derivatives:

According to a report from Public Citizen:

“In 1992, as the first step in its business plan to profit on the speculation of energy, Enron petitioned the CFTC to make regulatory changes that would limit the scope of the commission’s authority over certain kinds of futures contracts.  Immediately before leaving the CFTC, Gramm muscled through approval of an unusual draft regulation that would do just that – it narrowed the definition of futures contracts and excluded Enron’s energy future contracts and swaps from regulatory oversight.  Although her actions were criticized by government officials who feared the change would have severe negative consequences (as, in fact, it did), Gramm was rewarded five weeks after she left the CFTC with a lucrative appointment to Enron’s Board of Directors.  Between 1993 and 2001, when the company declared bankruptcy, Enron paid Gramm between $915,000 and $1.85 million in salary, attendance fees, stock option sales, and dividends.”

Enron was a major campaign contributor to Wendy Lee Gramm’s husband, former Senator Phil Gramm, for whom the Gramm-Leach-Bliley Act is partially named.

Gramm-Leach-Bliley is the legislation signed into law in 1999 that overturned the seminal consumer protection legislation against bank abuses known as the Glass-Steagall Act. It allowed the gambling casinos of Wall Street (investment banks and brokerage firms) to merge with commercial banks holding FDIC-insured deposits of savers and to use those insured deposits to gamble for the house in unregulated derivatives. (See here and here for how that’s worked out.)

What was the Koch brothers’ interest in deregulating derivatives? Unknown to most Americans, in addition to its oil, chemical and lumber interests, Koch Industries has a sprawling futures trading operation known as Koch Supply & Trading. The Koch web site defines the operation thusly:

“Building on four decades of trading experience, our capabilities are rooted in energy products. Our Metals and Derivatives Trading groups have also expanded beyond trading, logistics and operations to pioneer the use of risk-management tools. Each of our team members has a role in exchanging some of the world’s most valued commodities.”

In 2014, Tim Dickinson took an in-depth look for Rolling Stone Magazine into the “Toxic Empire” of the Koch Brothers, including Koch Supply & Trading. Dickinson reports:

“Like a casino that bets at its own craps table, Koch engages in ‘proprietary trading’ – speculating for the company’s own bottom line. ‘We’re like a hedge fund and a dealer at the same time,’ bragged Ilia Bouchouev, head of Koch’s derivatives trading in 2004. ‘We can both make markets and speculate.’ The company’s many tentacles in the physical oil business give Koch rich insight into market conditions and disruptions that can inform its speculative bets. When oil prices spiked to record heights in 2008, Koch was a major player in the speculative markets, according to documents leaked by Vermont Sen. Bernie Sanders, with trading volumes rivaling Wall Street giants like Citibank. Koch rode a trader-driven frenzy – detached from actual supply and demand – that drove prices above $147 a barrel in July 2008, battering a global economy about to enter a free fall.”

Wendy Gramm’s husband, former Senator Phil Gramm, served as Chair of the Senate Banking Committee from 1995 to 2000. His deregulatory legislation and blind march to the drumbeat of special interests was blamed by Time Magazine as a key contributor to the financial collapse in 2008.

Americans need to be on their guard that Senator Shelby’s tenure as Chair of the Senate Banking Committee is not heading in that same direction. Ranking Member of that Committee, Senator Sherrod Brown, needs to use his bully pulpit to make certain there is balanced testimony at public hearings.