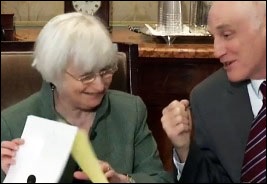 Fed Chair Janet Yellen Shares a Moment of Humor With Fed Board Member Daniel Tarullo Prior to the Open Board Meeting on March 4, 2016 Where the Fed Proposes a New Rule to Contain Counterparty Risk on Wall Street

Four days after the Federal Reserve Board of Governors held an open meeting to propose a new rule to contain counterparty risk on Wall Street on a bank by bank basis, researchers at the U.S. Treasury’s Office of Financial Research (OFR) dropped a bombshell on the Fed. The researchers, Jill Cetina, Mark Paddrik, and Sriram Rajan, produced a study which shows, in their opinion, that the Fed’s stress test that measures counterparty risk on a bank by bank basis is all wet. The problem, say the researchers, is not what would happen if the largest counterparty to a specific bank failed but what would happen if that counterparty happened to be the counterparty to other systemically important Wall Street banks.

The researchers note that the Fed’s stress test “looks exclusively at the direct loss concentration risk, and does not consider the ramifications of indirect losses that may come through a shared counterparty, who is systemically important.” By focusing on “bank-level solvency” instead of the system as a whole, the Fed may be ignoring the real problem of systemic risks in the system. The researchers write:

To put some simple language perspective on this, what Wall Street effectively did in the lead up to the crash of 2008, was to make the big insurer, AIG, its bitch. Some of the biggest Wall Street banks, like Goldman Sachs, Citigroup, and Merrill Lynch, got AIG to sell them credit default swaps. The swaps were a wager that if a financial institution, like Lehman Brothers, should fail, the Wall Street banks would collect billions of dollars from AIG. When Lehman failed, AIG didn’t have the money to cover the bets so a gun was put to the head of the taxpayer to make these Wall Street banks whole – at the outrageous rate of 100 cents on the dollar.

With Senator Bernie Sanders stumping across the United States reminding folks that the riskiest banks need to be broken up and the Glass-Steagall Act restored, while President Obama attempts to persuade the public that his financial reform legislation known as Dodd-Frank has things under control on Wall Street, this new report from OFR raises clear doubts about just how under control things really are.

According to the study, just six banks make up the “core” of the U.S. financial system. (That’s six banks out of a total of 6,172 commercial banks in the U.S. Those banks are, unfortunately, not stand alone insured depository institutions but rather big Wall Street trading firms in drag as commercial banks: Bank of America Corp., Citigroup Inc., Goldman Sachs Group, Inc., JPMorgan Chase Co., Morgan Stanley, and Wells Fargo & Co.)

Has progress been made in reducing risk at these systemically important banks as President Obama would have us believe? According to the study, while individual banking holding company’s direct losses have declined under the Fed’s stress tests, “counterparty credit risks to the banking system collectively have risen and may suggest a greater systemic risk than is commonly understood.”

The OFR report also raises an issue that we have worried about for a very long time – that the trillions of dollars still out there in over-the-counter derivatives that constitute private contracts between one too-big-to-fail bank and another or an insurance company counterparty, have not seen the light of day at the regulators. The OFR researchers write:

“Systemic concentration risks are not possible to infer when supervisors examine bilateral exposures that lack granular data such as contract details.”

If you take this most recent study from the very bright and intuitive folks at the OFR and combine it with the gut-churning report OFR released in February 2015 on the interconnectedness of the mega banks on Wall Street, you have a realistic script for how things will play out in the next crash. This, as much as anything else, is why voters are kicking establishment candidates to the curb.