Bernie Who? Polls and Big Media Eat Crow This Morning

There is a lot of handwringing in the Hillary Clinton campaign this morning and a lot of head scratching in corporate media newsrooms over the egregiously flawed polls that predicted a double digit win for Clinton over Senator Bernie Sanders in the delegate rich state primary held in Michigan yesterday. With 97 percent of the vote counted this morning, CNN reports that Sanders took 50 percent of the vote to Clinton’s 48 percent. (Clinton easily won Mississippi as polls predicted accurately.)

Harry Enten at FiveThirtyEight summed up the embarrassment this morning, writing:

“Bernie Sanders made folks like me eat a stack of humble pie on Tuesday night. He won the Michigan primary over Hillary Clinton, 50 percent to 48 percent, when not a single poll taken over the last month had Clinton leading by less than 5 percentage points. In fact, many had her lead at 20 percentage points or higher. Sanders’s win in Michigan was one of the greatest upsets in modern political history.”

What explains the flawed polling? Amanda Girard of US Uncut thinks the fact that polling was predominantly done to potential voters on their landline phones, as opposed to mobile phones which are widely used by Sanders’ younger supporters, may have been a factor. (We know plenty of Millennials who don’t even own a land line phone, using their mobile phone for calls, texting, emailing, web browsing and photo sharing.)

We also thought it would be worthwhile to see how corporate media handled the upset win by Sanders on the front pages of their digital editions this morning. Our interest was piqued after Adam Johnson of Fairness and Accuracy in Reporting (FAIR) wrote yesterday that the Washington Post ran 16 negative stories on Senator Bernie Sanders in 16 hours, including during the pivotal Democratic debate in Flint, Michigan. Johnson produced the headlines to back up his position. AlterNet picked up the story yesterday, generating an astounding 543 comments and hurtling the story across social media web sites. The theme of the typical comment: there is too much corporate control of both media and elections in the U.S.

This morning, gauging from the corporate media headlines, we found, overall, what felt like a new respect for Sanders’ campaign, per the samples below. (The Los Angeles Times headline above was the biggest ouch for Clinton, suggesting she’s in the same boat as Marco Rubio.) 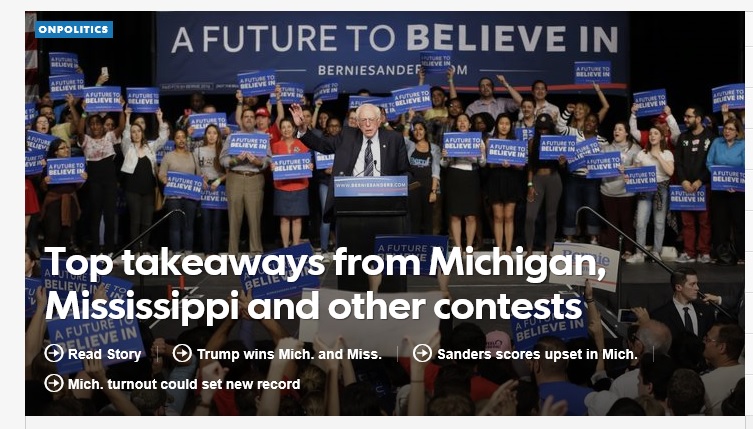