U.S. Senate Holds a Critical Hearing on the Stock Market on March 3, 2016 and 73 Percent of the Senators on the Subcommittee Are a No-Show

There are 15 U.S. Senators who are members of the U.S. Senate Banking Committee’s Subcommittee on Securities, Insurance, and Investment that has been investigating the charges that the stock market is rigged by the stock exchanges along with dark pools run by large broker-dealers that are operated as opaque, unregulated quasi stock exchanges, high frequency traders at hedge funds, conflicted payment for order flow, and tricked-up order types – to mention just a few of the ways the public investor is getting fleeced.

The Subcommittee held a critically important hearing yesterday to review what progress the Securities and Exchange Commission (SEC) and the Financial Industry Regulatory Authority (FINRA), the self-regulatory Wall Street watchdog, were making to rein in the abuses on Wall Street.

Despite the lack of trust the public feels toward Wall Street and the abysmal 14 percent approval rating of Congress (according to the most recent Gallup poll), 73 percent of the Senators on this hearing panel couldn’t be bothered to show up for the hearing. Outside of the Republican Chair of the hearing, Senator Mike Crapo, not one other Republican out of a total of eight on the Subcommittee attended. Out of the seven Democratic Senators on the panel, three showed up: Senator Mark Warner, the Ranking Member, Senator Elizabeth Warren, and Senator Joe Donnelly.

Senator Chuck Schumer, Democrat from New York, whom one might think would have an interest in restoring trust in Wall Street, was noticeably absent. Schumer derives substantial campaign financing sums from Wall Street and what Wall Street wants is business as usual.

Adding to the apathy that prevents any meaningful reform of Wall Street’s serial crimes against the public, major media were no-shows as well. We could not find one major newspaper that covered what transpired in the hearing yesterday. The New York Times gave it one sentence that seriously failed to capture the essence of the hearing. The Times wrote: “A Senate hearing today will examine how the pricing structure of the computer-driven U.S. stock market became so convoluted.”

The wire service, Reuters, did write about the hearing but covered only one of the many topics, the maker-taker model, a fancy name for a rebate kickback scheme to attract order flow at competing exchanges.

Those few Senators that did attend came exceptionally well prepared. Mainstream media should have shown the respect and due diligence to allow the public to hear what these hardworking Senators had to say. 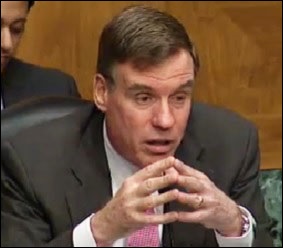 Senator Mark Warner Shows Up Well Prepared for the March 3, 2016 Hearing But Only Two of His Democratic Colleagues Show Up

“Last week, I saw a stunning graphic from RBC Capital Markets that charted 839 different fee schedules that are composed of 3,729 separate fee variables.  When one examines these variables in detail, it appears that exchanges are using their ‘fee engineers’ to put together bespoke’pricing terms for one or a small handful of customers in order to attract and retain order flow.  Given this incredible complexity, it [is] likely very difficult for market participants to know whether they are getting best execution and the benefit of a ‘fair and orderly’ market.”

(Does this look “fair and orderly” to you?)

Warner also called attention to the inexcusable foot-dragging by the SEC on launching the Consolidated Audit Trail (CAT) that would allow market regulators to quickly spot market rigging tactics by the Wall Street firms that presently have the SEC outgunned and outsmarted on essentially every technological front. Warner stated:

“…we must have the regulatory tools necessary to conduct adequate market oversight. This means establishing the Consolidated Audit Trail so the SEC can have near real-time insight into the mechanics of the stock market. It is beyond frustrating that, nearly 6 years after the Flash Crash, we still haven’t built the CAT.  Both of our witnesses today have a critical role in its approval, so I look forward to hearing their explanations on its timely completion.”

It is now the perceived wisdom that you will never see a Consolidated Audit Trail, or at least one that works capably, on SEC Chair Mary Jo White’s watch. White represented the biggest Wall Street banks prior to coming to the SEC from the law firm Debevoise and Plimpton. White’s husband, John W. White, is a partner at another big Wall Street law firm, Cravath, Swaine & Moore LLP.

It is also the perceived wisdom that President Obama took his marching orders from Wall Street in appointing his deeply-conflicted regulators to oversee Wall Street reforms as a thank you for its generous campaign financing. Hillary Clinton’s refusal to say she won’t enshrine the same revolving door if elected President, after receiving tens of millions of dollars from Wall Street, is a major wind beneath the wings of Senator Bernie Sanders’ campaign for President. Sanders is an arch opponent of how Wall Street operates. 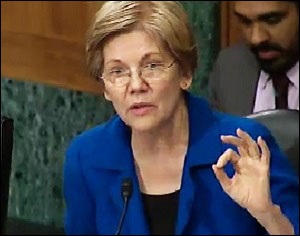 Senator Elizabeth Warren, As Usual, Buries the Crony Regulators With Her Line of Questioning at the March 3, 2016 Senate Hearing on Stock Market Structure

Always at the top of her game when it comes to Wall Street, Senator Elizabeth Warren made the two witnesses from the SEC and FINRA squirm in their seats with her line of questioning. First, she clarified that FINRA is not a Federal regulator but rather an industry-funded self regulator. Warren cited a recent study by Mark Egan of the University of Minnesota and Gregor Matvos and Amit Seru of the Booth School of Business at the University of Chicago which demonstrated that stockbrokers (a/k/a financial advisers) with serial records of misconduct are routinely rehired by Wall Street firms, particularly those that cater to unsophisticated investors.

Warren lectured Richard Ketchum, Chairman and CEO of FINRA, telling him he was obviously not getting the bad brokers out of the industry. “They’re still there,” said Warren. “They’re there in big numbers and they’re concentrated in places where they’re most likely to encounter unsophisticated consumers.”

FINRA and its predecessor self-regulator, the NASD, have repeatedly come under fire by the Public Investors Arbitration Bar Association (PIABA) for their deeply conflicted private justice system for hearing claims from both employees and customers. Yesterday, Senator Warren alerted her colleagues that in addition to these private hearing panels having a lousy record of not ruling in the claimant’s favor against a Wall Street firm, a new PIABA study found that over $60 million in FINRA arbitration awards to customers were never paid. Ketchum did not offer any reassuring comments on how this was going to be remedied but did note during the hearing that he’s retiring this year — in other words, this can will be kicked down the road along with the Consolidated Audit Trail.

Another thing that sets FINRA apart from a Federal government agency is the eye-popping pay lavished on its regulators. According to a 2013 report in the Bond Buyer, Ketchum made $3.17 million in total compensation in 2011 at FINRA, with base compensation of $979,962. In contrast, in 2013, according to the Bond Buyer, Mary Jo White, as head of the SEC, a Federal agency, was making $165,300.

The other witness yesterday was Stephen Luparello, Director of the Division of Trading and Markets at the SEC. Exactly why Luparello would leave FINRA, where he had worked for 16 years (including his term at its predecessor, the NASD) is curious. According to the same Bond Buyer article, Luparello had made $1.38 million in total compensation at FINRA, with a base of $590,030. FederalPay.org says Luparello was making $200,000 at the SEC in 2014.

Other than not getting the Consolidated Audit Trail system up and running, Luparello has effectively injected the discredited self-regulatory model of FINRA into the SEC. The body that has been set up by the SEC to study how to un-rig Wall Street and restore the public’s confidence is called the Equity Market Structure Advisory Committee. Wall Street trading firms dominate on this Committee with scant meaningful public interest participation.

As Senator Bernie Sanders likes to say, it will take a political revolution to short-circuit Wall Street’s business model of fraud and the campaign financing quid pro quo model – and, we would add, the rigged regulatory structure that enshrines and embellishes the serial looting of the public.