Even When Bernie Sanders Wins, He Loses at the New York Times 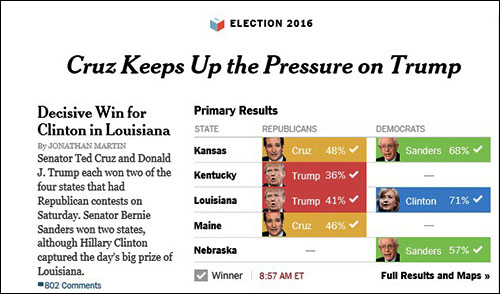 The New York Times, which makes its bread and butter off of a high-flying Wall Street, has rewritten basic math in today’s digital edition to make Hillary Clinton’s loss to Bernie Sanders’ in yesterday’s Super Saturday states appear to be a big win. According to New York Times’ math, winning over the voters of one state is better than winning over the voters of two. Under a bold headline (“Decisive Win for Clinton in Louisiana”) that mentioned nothing about Bernie Sanders’ huge margin of victory by more than two to one in Kansas and decisive win in Nebraska, the Times said in its lead paragraph:

To most Americans, Louisiana is not seen as a “big prize.” Louisiana doesn’t even rank among the top 20 most populous states in the U.S.

The Associated Press had the following, far more in tune with reality, coverage of the Sanders/Clinton matchup:

“On the Democratic side, Bernie Sanders notched wins in Nebraska and Kansas, while front-runner Hillary Clinton snagged Louisiana, another divided verdict from the American people…Sanders won by solid margins in Nebraska and Kansas, giving him seven victories so far in the nominating season, compared to 11 for Clinton, who still maintains a commanding lead in competition for delegates.”

Whenever the New York Times writes a skewed article about Hillary Clinton, including its over-the-top endorsement of Clinton on January 31, readers take note in the comment section.

For this current article, a commenter named “NM” from Danville, California wrote:

“Wow, by now it should be plain obvious to everyone but the folks in NYT that something is at the very least odd about the coverage of Democratic race between Sanders and Hillary. To say it has been lopsided in favor of Hillary is an understatement. So Sanders wins 2 out of 3 but the headline says Hillary won a ‘resounding’ victory in LA. But by the same account and logic, so did Sanders in Kansas. Factually correct reporting perhaps, but grossly off in spirit. And that is not what I expect of NYT.”

“Bernie killed it in Kansas. He won by better than two to one. He won big in all four congressional districts. Look, Kansas isn’t San Francisco. It is a very conservative place. Democrats go to church there. They go hunting.

“Bernie obviously has hit a nerve with Kansas voters. If he can win big there and did well in Nebraska, there is every reason to believe that he will rack up a lot of victories in the western states and upper midwest. We have ourselves a race!”

“You have buried Sanders’ victories in two states deep into this muddled article, and celebrated Clinton’s victory in the Deep South, yet again, in the headline as well.”

Hillary Clinton’s big lead in the delegate count makes her look like a candidate that is widely supported by the populace. But the bulk of her lead comes from a Democratic party machine device that is poorly understood by the public. As Paul from Connecticut writes in the Times comment section:

“Could someone please explain and defend the Democratic Party’s use of ‘superdelegates’. It appears on its face to be the most undemocratic device ever conceived and subverts the will of the people. I’m serious, am I missing something? This is not a comment on whether they should be included in each candidate’s tally as that has been covered extensively by the commenters. I just need to know if there is a rational defense of this system and why it was implemented.”

Sally Kohn, a CNN political commentator, neatly captured the sordid history of super delegates and the Democratic party on February 23 of this year. Kohn writes that to “ensure that the voters themselves didn’t have all the power, in 1982 the Democratic Party adopted what are called superdelegates, who today control 15% of the final nomination process.”

In other words, the Democratic party’s backroom machine is stripping away 15 percent of the will of the people. (Is it any wonder Wall Street maintains its death grip on America?)

“It’s in the Democratic Party that the outsized power and lack of accountability of superdelegates is supremely, well, undemocratic.

“Specifically, after the Democratic caucuses in Nevada, CNN estimated that Hillary Clinton and Bernie Sanders were almost tied for pledged delegates, with 52 and 51 of them, respectively. And yet Clinton was leading by a much wider margin in the total delegate count because a whopping 445 superdelegates — out of a total of 712 — pledged to support her. By comparison, just 18 superdelegates pledged to support Sanders.

“In other words, while Clinton and Sanders were almost perfectly split in the tally of voter-determined delegates, superdelegates threw their weight behind Clinton by an almost 25-to-1 ratio.”

Who exactly are these superdelegates? They are both unelected Democratic party elites and elected politicians who are allowed to support the candidate of their choice or, as it is often phrased, put their finger on the scale of free and fair elections. Just the fact that the New York Times and others continue to dump in these superdelegate tallies with the tallies of delegates from real primaries and caucuses is also putting the finger on the scale by making it appear that Sanders is falling far behind in voter support.

In a February 11 interview, the Democratic National Committee Chair, Debbie Wasserman Schultz, was quizzed on these superdelegates by CNN’s Jake Tapper:

Tapper: “What do you tell voters who are new to the process who say this makes them feel like it’s all rigged?”

Wasserman Schultz: “Unpledged delegates exist really to make sure that party leaders and elected officials don’t have to be in a position where they are running against grassroots activists.”

Let that statement from the DNC chair sink in. What does it say about the top of the Democratic party when grassroots activism is no longer seen as the hallmark of a thriving democratic process?