On March 7 of this year, President Obama called the full Financial Stability Oversight Council (F-SOC) to the White House for a meeting. F-SOC was created under the 2010 financial reform legislation known as Dodd-Frank to monitor systemic risks building up in the financial system and, ideally, nip them in the bud before they got out of hand. Every major Wall Street bank regulator sits on F-SOC.

Immediately following his meeting with F-SOC on March 7, President Obama held a press conference (see video below) with the F-SOC members sitting around him at a large conference table. Sitting two seats away from the President was Mary Jo White, Chair of the Securities and Exchange Commission. Directly across the table was Thomas Curry, head of the Office of the Comptroller of the Currency (OCC) that oversees national banks, and Jack Lew, U.S. Treasury Secretary who Chairs F-SOC. All three of these individuals (and likely everyone else around the table with the possible exception of President Obama) is intimately aware that the vast majority of derivatives today are not traded in central clearinghouses as was promised under the 2010 Dodd-Frank legislation almost six years ago.

And yet, President Obama boldly stated to the press in attendance on March 7 that when it comes to derivatives “you have clearinghouses that account for the vast majority of trades taking place.”

The derivatives issue was a critical component of Dodd-Frank because opaque derivative trades led to the largest failure in U.S. history of an insurance company during the 2008 crash. It was discovered that major Wall Street banks had made the sprawling insurer, AIG, its insurer (counterparty) on derivatives called credit default swaps — effectively gambles by Wall Street banks that sectors and companies were going to blow up. Because AIG did not have the funds to make good on those bets, the U.S. government took over AIG with a $185 billion taxpayer backstop, which was correctly viewed by Main Street as another back door bailout of Wall Street. It was later revealed that major Wall Street and foreign banks and hedge funds received more than half of that money ($93.2 billion) for the derivatives bets they had made with AIG and securities loan transactions. The firms were paid 100 cents on the dollar even though AIG was using taxpayer money.

Public pressure eventually forced AIG to release a chart of these payments, showing just a narrow window of disbursements from September to December 2008. The chart shows that Goldman Sachs received $12.9 billion of the funds; Societe Generale received $11.9 billion; and Merrill Lynch and its new parent, Bank of America, received a combined $11.5 billion – to name just three of the banking recipients.

The Dodd-Frank reform promised to bring these derivative bets out of the shadows by moving the trades from secret contracts between a Wall Street bank and a counterparty to trading in the open at clearinghouses, which would provide transparency as well as adequate capital to pay off if a party to the trade became insolvent.

In the press conference on March 7, President Obama had this to say on the derivatives issue:

“Irresponsible, risky bets with inadequate safeguards and that reward executives who take those risks greatly, can cause enormous damage to our economy overall…

Just yesterday, the OCC released its most recent report for the last quarter of 2015. It stated the following:

To put it another way, the “vast majority” or 63.1 percent of derivatives are still traded in the dark.

As we have previously reported (see latest graph below) derivatives remain dangerously concentrated, with Citigroup, JPMorgan Chase, Goldman Sachs, Bank of America, and Morgan Stanley holding $231 trillion notional amount of derivatives out of a total of $247 trillion for the top 25 holding companies.

In the latest report, the OCC attempts to put a happy spin on the fact that credit derivatives have declined to just $7 trillion as of December 31, 2015. But the question the OCC should be asking is who could possibly be a guarantor of $7 trillion in credit derivative bets? Look at the dollar amount of the assets of the 25 largest holding companies listed below. The only conclusion to draw is that Wall Street banks are counterparties to each other on these bets (as the Office of Financial Research has suggested) and/or there is another insurance company, global bank or sucker corporation out there somewhere that is sitting naked with no money to pay off these bets.

The reason that both the left and right are bemoaning the lack of meaningful financial reform is because it’s a legitimate and urgent matter. The ratings agencies are still taking pay from Wall Street to dole out their ratings. Wall Street banks are still operating unregulated opaque quasi stock exchanges known as dark pools inside their firms. CEO pay is still obscene and incentivized to crime with JPMorgan giving its CEO Jamie Dimon a 35 percent pay boost to $27 million for 2015 after the bank received three criminal felony charges over the two prior years. Cartel activity has now become a business model with global banks, including U.S. banks, charged with colluding on rigging Libor interest rates and rigging foreign currency markets while one trader joked in a chat room that “If you ain’t cheating, you ain’t trying.”

President Obama’s attempt to diminish the serial crimes that Wall Street continues to inflict upon the public and to bury his head in the sand over the gaping holes Dodd-Frank has left unattended, is an insult to the Office of the President. Given the fact that the President has a Harvard Law degree, it’s difficult to pass this off as ignorance. One might be forgiven for suspecting that the President is attempting to polish his legacy in his last year in office while simply refusing to allow the facts on the ground to get in his way. 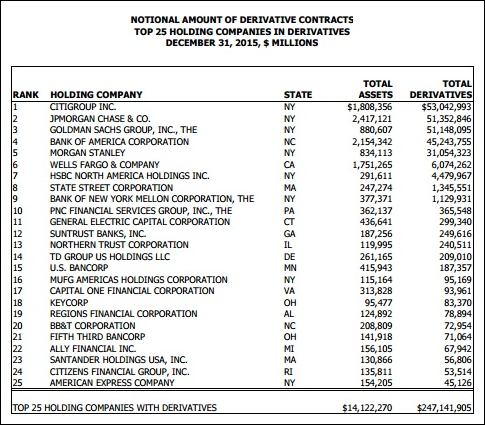