The Times Endorses Hillary Clinton with a Banner Ad from Citigroup 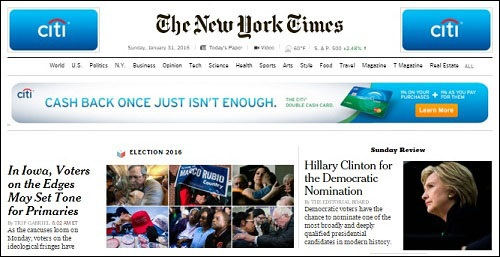 Today’s digital edition of The New York Times captures the essence of the cancer eating away at our democracy: a leading newspaper is endorsing a deeply tarnished candidate for the highest office in America while a major Wall Street bank that has played a key role in her conflicted candidacy runs a banner ad as if to salute the endorsement. The slogan on Citigroup’s ad, “cash back once just isn’t enough,” perfectly epitomizes the frequency with which the Clintons have gone to the Citigroup well.

According to the Center for Responsive Politics, among the top five largest lifetime donors to Hillary’s campaigns, Citigroup tops the list, with three other Wall Street banks also making the cut: Goldman Sachs, JPMorgan Chase and Morgan Stanley. (The monies come from employees and/or family members or PACs of the firms, not the corporation itself.)

Hillary Clinton famously told ABC’s Diane Sawyer in 2014 that she and Bill Clinton left the White House after his second term “dead broke.” But apparently, Citigroup felt they were a good investment. According to PolitiFact, Citigroup provided a $1.995 million mortgage to allow the Clintons to buy their Washington, D.C. residence in 2000. That liability does not pop up on the Clinton disclosure documents until 2011, showing a 30-year mortgage at 5.375 percent ranging in face amount from $1 million to $5 million from CitiMortgage. The disclosure says the mortgage was taken out in 2001.

Citigroup has also committed $5.5 million to the Clinton Global Initiative, a charity run by the Clintons. It has also paid enormous speaking fees to Bill Clinton.

What has Citigroup gotten from its outsized support of the Clintons? Bill Clinton is the President who repealed the most important investor protection legislation of the past century, the Glass-Steagall Act, an outcome heavily lobbied for by Citigroup. Hillary Clinton has signaled to Wall Street that she will not push to have the Glass-Steagall Act restored while her leading opponent, Senator Bernie Sanders of Vermont, vows to restore it and return sanity to America’s financial system.

Just nine years after Bill Clinton signed this massive deregulation of Wall Street and gave Citigroup’s Sandy Weill a souvenir pen from the signing, the U.S. financial system collapsed in the greatest implosion since the Great Depression.  Two years before the collapse, Sandy Weill had exited Wall Street as a billionaire as a result of this deregulation, while Citigroup became a penny stock in the crash and a ward of the government in the greatest taxpayer bailout in U.S. history.

In March of 2014, during the Senate confirmation hearing to install Stanley Fischer, a former executive of Citigroup, as Vice Chairman of the Federal Reserve, Senator Elizabeth Warren summed up what Citigroup’s money can buy in Washington:

Senator Warren: “Many big banks are well represented in Washington but the connection between Citigroup and Democratic administrations really sticks out. Three of the last four Democratic Treasury secretaries have Citigroup ties; the fourth was offered but turned down the CEO position at Citigroup. Former Directors of the National Economic Council and the Office of Management and Budget at the White House and our current U.S. Trade Representative also have Citigroup ties. You once served as President of Citigroup International and are now in line to be number two at the Federal Reserve…”

Fischer said he thought his Citigroup experience would help him.

Senator Warren countered: “I also think it’s dangerous if our government falls under the grip of a tight knit group connected to one institution. Former colleagues get access through calls and meetings; economic policy can be dominated by group think; other qualified and innovative people can be crowded out of top government positions.”

One of Hillary’s strengths according to the Times’ endorsement is that she has engaged in a “lifelong fight for women,” a statement that only resonates in some Orwellian universe intractably mired in Newspeak.

Hillary Clinton is the woman who stood by her man as multiple women came forward to accuse him of adultery or sexual assaults. Hillary Clinton is the woman who served as First Lady as Bill Clinton eviscerated the lives of poor children and single mothers by enacting welfare reform, a program so draconian that Senator Edward Kennedy called it “legislative child abuse” and voted against it.

As a result of Bill Clinton’s handiwork in the repeal of the Glass-Steagall Act, millions more women and children and families were thrown into poverty during the financial crash; 10 million people were forced from their homes through foreclosures, while Bill and Hillary’s rich campaign supporters became even richer – right along with the Clintons.

The New York Times has a long, storied history of getting it wrong about who is a proper advocate for women. In January 1868, Susan B. Anthony, Elizabeth Cady Stanton and Parker Pillsbury initiated publication of The Revolution, a news weekly hoping to spark another political revolution. Anthony and Stanton, who would lead the revolution to secure U.S. women the right to vote in 1920 (a disgraceful 144 years after the founding of our “democracy”) were ridiculed by the New York Times. It wrote at the time:

“Our women – a great many of them – ‘Nelly and Kitty, and Dolly and Ketty, and Dorothy Draggletail,’ are anxious to give a helping hand in the government of the world and set things to right, in a general way, and chiefly by means of the ballot-box. We think they are all wrong…

“The ladies mistake their own case, and the world’s case as well. They have power and influence enough – exercised as these are in the sacred places and citadels for the sake of which men go out, and work and trade and fight and run from one end of the world to the other – their homes…

“If women were to quit their family sphere, as a general thing society would run wild or drop loose. They are deficient enough in the practice of those home duties, as matters are at present.”

The Times also famously led the false propaganda campaign that Iraq had weapons of mass destruction in the lead up to the Iraq war – which Hillary Clinton voted for — only to issue a weak apology later, writing: “In some cases, information that was controversial then, and seems questionable now, was insufficiently qualified or allowed to stand unchallenged. Looking back, we wish we had been more aggressive in re-examining the claims as new evidence emerged — or failed to emerge.”

And it was a steady editorial drumbeat at the Times that helped Citigroup and Bill Clinton overturn the Glass-Steagall Act, which it also ended up admitting was a dead wrong decision.  In a July 27, 2012 editorial, the Times sheepishly apologized:

When Bill Clinton took his seat in the Oval Office in 1993, the national debt stood at $4.4 trillion. In 2007, prior to the crash on Wall Street, the national debt stood at $9 trillion, expanding significantly because of the ill-advised and ill-fated war in Iraq for which the Times had waved the pompoms. America’s national debt has again doubled, in just eight years to $18.9 trillion, because of the Wall Street crash, the taxpayer bailouts, the fiscal stimulus required to shore up the economy because of the crash, and the lackluster growth that has resulted from the financial dislocations ushered in by the repeal of the Glass-Steagall Act.

Exactly how many times can you get critical issues wrong and still call yourself the paper of record?

Since the endorsement of Hillary Clinton was posted on the front page of the Times digital edition yesterday, over 3500 readers have posted comments, with a large share expressing outrage along with some threats to cancel subscriptions. Coming just two days before the Iowa caucuses, where Sanders is gaining steam, one reader said he sensed “panic” on the part of the Times. Another summed up the overall contempt with this:

“With her hawkish views on the middle east and her unwillingness to reign [sic] in big banks HRC comes across more as a centrist republican than a moderate democrat. I would call her a democrat in name only, the way Trump is a republican in name only.  She, like Bill, will sell the interests of the American people up the river as fast as a New York minute… Experience? She has minimal experience in an appointed position, and a little senatorial experience, while her Democratic opponent [Senator Bernie Sanders] has 30 years in elected office.”

If the New York Times was hoping to provide a boost to Hillary’s prospects, this endorsement may have backfired. If the editorial page editors are studying the outpouring of comments, they are quickly assessing that the public is not only fed up with establishment candidates but also with the establishment media. Bernie Sanders and Elizabeth Warren have unleashed the furor of the populace and there’s no way this genie is going back in the bottle anytime soon.