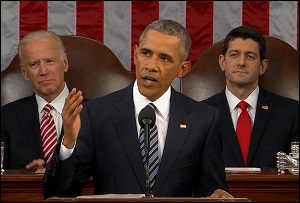 President Obama Delivers His State of the Union Address, January 12, 2016

Yesterday, there were two assessments on the state of the union. Both came with fancy charts. One was delivered by the President of the United States, who sounded very much like the Pope in seeking peace among members of Congress and individual citizens. The other was delivered by a hard core realist – Jeffrey Gundlach, CEO of investment management firm, DoubleLine Capital.

If you watched the President’s State of the Union speech at WhiteHouse.gov, you got to see the interesting charts – some are still available here along with a transcript of the speech. One chart, shown below, reads: “Today, the top 3 percent of the richest Americans hold half the nation’s wealth.” That correct assessment, unfortunately, makes another statement by the President impossible to justify. The President told the highly cynical American people the following: “Anyone claiming that America’s economy is in decline is peddling fiction.”

Chart Displayed at WhiteHouse.gov During the President’s State of the Union Address

It’s simply impossible to have an economy or a democracy moving in the right direction when wealth and income is clustered in so few hands. There is simply not enough purchasing power in the hands of the masses to buy the goods and services being produced by the rich corporate owners.

It’s not just the Republican candidates running for President who are saying the U.S. is in decline. It’s also Senator Bernie Sanders of Vermont who is running as a Democrat. Sanders is stumping across the U.S. telling tens of thousands of fellow realists the following:

The U.S. has the greatest income and wealth inequality of any other major developed country;

One percent of the population now controls a greater share of pre-tax income than at any time since the 1920s, (the last time Wall Street was legally allowed to gamble for the house with bank deposits);

The top one-tenth of one percent of the super elite own almost as much wealth as the bottom 90 percent;

Since Wall Street imploded under the weight of its own corruption in 2008, destroyed the U.S. economy, used taxpayer money to bail itself out and reward the financial elites with millions of dollars in bonuses and golden parachutes, only the poor and middle class have paid the price. The one percent have reaped 58 percent of all income gains since the crash.

There is simply no honest argument to be made that the above set of facts does not depict both an economy and a democracy in decline.

Given what the President inherited from the administration of George W. Bush, however – an imploding Wall Street, an economy rapidly heading toward a Great Depression type of collapse, plunging stock prices, skyrocketing foreclosures and job losses – it is also true that we all could be a lot worse off right now had someone else occupied the Oval Office for the past seven years.

The President peddled some additional fiction when he stated that the financial crisis had been caused by “recklessness on Wall Street.” Recklessness is when you run a red light. Fraud is when you are repeatedly warned of illegal acts within the business you oversee and you look the other way because the profits and your big bonuses are rolling in. Given the human suffering that Wall Street unleashed on this country and people around the world, it’s a grave injustice to chalk this off to recklessness. And, let’s face it, it was President Obama who chose to keep Eric Holder and his team from Covington & Burling in charge of not-prosecuting Wall Street.

Given the President’s abject denial of what really happened on Wall Street, it’s curious he had this to say about being in denial:

“Sixty years ago, when the Russians beat us into space, we didn’t deny Sputnik was up there. We didn’t argue about the science, or shrink our research and development budget. We built a space program almost overnight, and twelve years later, we were walking on the moon.”

The President was talking about getting America back on the road to innovation. Of course, that’s critically important but it, too, requires admitting what Senator Sanders is accurately telling Americans – that Wall Street’s business model is fraud. It’s Wall Street that’s still peddling fiction as hot IPOs. It’s Wall Street that will still put lipstick on a pig and underwrite a mega stock offering because there’s a sexy story to sell rather than a legitimate innovation that will improve lives, create jobs or have export potential. Until Wall Street is reformed and resumes its mandate as an efficient and fair and honest allocator of capital, the country will simply spiral from one financial crisis to the next.

It’s simply impossible to argue that America is on the right road to creating great, lasting, innovative companies when Nasdaq, the stock market known for listing young start up companies, is still trading below the price level it set in March 2000 – more than 15 years ago. 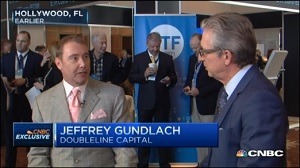 Jeffrey Gundlach, in a web cast yesterday afternoon, was far less optimistic than the President on where the U.S. economy may be headed. Gundlach also had a lot more slides to back up his assertions. One particularly worrisome slide showed that commodity prices, as measured by the CRB index, had its worst decline in 2015 (-23.05 percent) since 1931, two years after the 1929 stock market crash and in the midst of the ravages of the Great Depression. In 1931, commodities registered -20.59 percent.

In 1931, the stock market correctly interpreted this commodity crash as a sign of deep economic woes and the S&P 500 sold off by 43.42 percent, according to Gundlach’s chart. But for some inexplicable reason (think endless Fed banter about the good economy – that’s from us, not Gundlach) in 2015 the S&P 500 actually eked out a gain of a little over 1 percent.

In an analysis dated December 11 at the DoubleLine web site, the company notes that typically the performance of high yield (junk) bonds and stocks are highly correlated. But over the past year there has been a divergence with the stock market seemingly ignoring the signals of widening spreads in the junk bond market. The DoubleLine note says this should be a “warning sign to market participants.” We strongly agree.

If that plays out as we think it will, President Obama may relish the fact that he has only one more year in office. To help the President put on Bernie Sanders’ big boy pants and face up to the reality of where we are as a nation, we’ve included below a chart of our own, courtesy of data from the St. Louis Fed, showing where real median household income and poverty rates have traveled in our “democracy” since 2007, the year before Wall Street’s frauds collapsed our financial system and our economy. 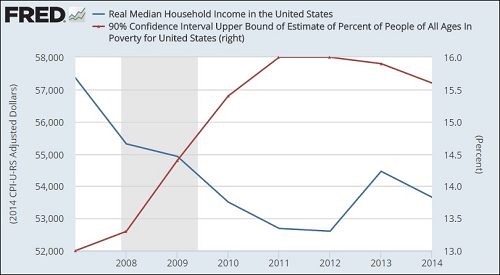