Just in Time for the Political Revolution: A Revolution Newspaper 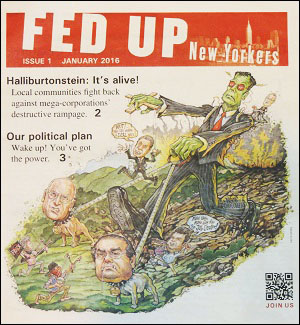 Presidential candidate, Senator Bernie Sanders of Vermont, is stumping across America urging citizens to help him create a meaningful political revolution to take back the country from the death grip of the one percent. His message is resonating. Sanders is attracting crowds of tens of thousands of disillusioned Americans.

Political revolution is also in the air in the state of New York where a group called “Fed Up New Yorkers” has just launched a newspaper whose stated purpose “is to lessen Big Money’s grip on our political system and on our society.” The newspaper founders say their project is both “a publishing project and a political plan.”

Publisher and Editor-in-Chief of the project is Neil Fabricant, retired president of George Washington University’s Graduate School of Political Management and a former legislative director of the New York Civil Liberties Union. Fabricant is also the author of the jaw-dropping book Mike! Wall Street’s Mayor, a devastating expose on the former billionaire Mayor of New York, Michael Bloomberg. (You can read our book review here.) When we wrote our book review in 2012, Michael Bloomberg, whose source of wealth comes from Wall Street, was worth $22 billion. According to Forbes, as of January 12, 2016, he is now worth $39.3 billion – an unfathomable jump of 78.6 percent in four years.

Michael Bloomberg’s experience has been far different than the middle class in America, which has seen its median wealth decline by 28 percent from 2001 to 2013, due in no small part to the Wall Street fraud that produced the greatest economic collapse in 2008 since the Great Depression of the 30s.

The managing editor of the newspaper is John Meyer, a veteran journalist and newspaper editor who has covered government and politics for newspapers in Ohio and North Carolina, and supervised state capitol and Washington bureaus for the New York Times Regional Newspaper Group.

Regular features in the newspaper will include “Hacks & Flacks,” profiling political, media, and academic propagandists. The first profile is of Terry Nelson, an operative in the Jeb Bush campaign. Another regular column, “Whores Who Would Be Madams,” shines a revealing light on government officials who spin through the revolving door to become corporate lobbyists.

One of the most intriguing articles in the first issue of the newspaper is the story of how Lewis Powell, a wealthy corporate lawyer and former President of the American Bar Association, who was appointed to the U.S. Supreme Court by Nixon, wrote a memo in 1971 that ushered in the “historic shift from share-the-wealth to winner-take-all capitalism,” according to the newspaper.

Powell’s thesis was that capitalism was being destroyed by everyone from students on campus to communists to members of the press, textbook authors, and activist judges. In what sounds like an exact page from the Koch brothers’ current playbook, the newspaper reveals how Powell mapped out the counterattack plan for the U.S. Chamber of Commerce:

“Capitalism would be destroyed unless corporate America played the long game across virtually every institution in American life. With targets that included textbooks and television (‘the national television networks should be monitored in the same way that textbooks should be kept under constant surveillance’), scholarly journals and magazines (‘there should be a fairly steady flow of scholarly articles presented to a broad spectrum of magazines and periodicals’) and mass-market paperbacks (‘the newsstands — at airports, drugstores and elsewhere — are filled with paperbacks and pamphlets advocating everything from revolution to erotic free love’), Powell called for a massive corporate commitment to reshape American society, its culture and institutions.”

Powell also noted that “The judiciary may be the most important instrument for social, economic and political change.”

As Wall Street On Parade has reported at length, this paranoia on the part of the wealthy has subverted the public’s right to untainted news, led to the democracy-killing Citizens United decision, created a stench leading to the chambers of sitting Supreme Court Justice Clarence Thomas, perpetuated a faux anti-terror campaign against Muslims, and led to a sprawling network of corporate front groups posing as engaged citizens.

Powell’s full memo can be read here. Footnote 13 in the Powell memo makes this statement : “Illustration of the type of article which should not go unanswered appeared in the popular ‘The New York’ of July 19, 1971. This was entitled ‘A Populist Manifesto’ by ultra liberal Jack Newfield — who argued that “the root need in our country is ‘to redistribute wealth’.”

Washington and Lee School of Law has a detailed archive on the Powell memo, which includes the article by Jack Newfield that Powell refers to in his footnote. It shows that the public was getting a little too close for comfort to understanding the institutionalized wealth transfer in America with its bold page heading that reads: “…Maldistribution of wealth in the U.S. is getting worse, not better. The top one percent now own 37 percent of the wealth…”

Of course, the staggering wealth inequality in America is far greater today and is in the process of creating another economic bust that will erase more wealth from the middle class and put more Americans below the poverty line.

Just out today is an article by Susan Antilla at TheStreet.com which effectively shows that the U.S. Chamber of Commerce is still meticulously following the essential outlines of that Powell memo. Antilla writes that the U.S. Chamber of Commerce “has attacked consumer advocacy organizations such as the Consumer Financial Protection Bureau, sued agencies such as the Environment Protection Agency and lobbied for the tobacco industry in the face of smoking’s dire health consequences.”

Antilla notes further that: “the Chamber gathers up boatloads of money from old-economy polluters and financial firms desperate to bully their ways out of following reasonable rules. Too often, its benefactors get exactly the results they’d hoped for…At heart — if only it had one — the U.S. Chamber of Commerce is an operation that keeps some of the worst of yesterday’s Corporate America alive.”