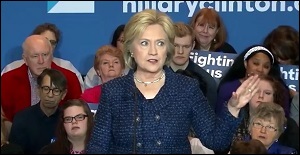 Hillary Clinton was stumping in Iowa last week, promising supporters that if she is elected President she will fight to get rid of the U.S. Supreme Court decision, Citizens United, which allows unlimited corporate money to influence elections. At one campaign stop, Hillary said the decision is having “pernicious effects on our electoral system.”

Hillary elaborated further on her views in an opinion piece for CNN last week, writing:

“It’s time to reclaim our democracy, reform our distorted campaign finance system and restore access to the ballot box in all 50 states.

“That starts with reversing Citizens United. And that’s where my comprehensive plan to restore common sense to campaign finance begins. As president, I’ll appoint Supreme Court justices who recognize that Citizens United is bad for America. And if necessary, I’ll fight for a constitutional amendment that overturns it.”

That’s a pretty bold claim from a candidate that has opened the spigots herself to corporate money – big chunks of which are being raised for her by registered lobbyists who work for lobbying firms employed by the likes of Wall Street heavyweights JPMorgan Chase, Citigroup, Goldman Sachs, Wells Fargo, Credit Suisse and every major trade association representing Wall Street.

Not only are the executives, employees and PACs of the biggest Wall Street firms swelling the Hillary Clinton campaign coffers but individual registered lobbyists of some of the most powerful lobby firms in Washington D.C. are holding fundraising parties for Hillary or soliciting funds for her campaign. Hillary could simply refuse to take this money. Instead, she’s raking it in.

According to the Federal Election Commission, as of September 30, 2015, Hillary had raised over $3 million from Federally registered lobbyists in just a six-month span from April 1, 2015 through September 30, 2015 – the latest period for which filings are available. One of the lobbyists raising funds for Hillary is Steve Elmendorf of the lobby firm Elmendorf Ryan. According to the Center for Responsive Politics, in 2014 that firm collected $10.4 million to lobby Congress on behalf of corporate interests. In 2014, its clients included some of the biggest players on Wall Street: Citigroup, Goldman Sachs, the New York Stock Exchange and two Wall Street trade associations: SIFMA and the Financial Services Forum, which consists of 16 CEOs of the largest banks and financial firms on Wall Street.

John Podesta, the current Chairman of Hillary’s campaign and the former Chief of Staff to former President Bill Clinton, has a brother who is a big corporate lobbyist in Washington, D.C. – Tony Podesta, founder of the Podesta Group. Tony Podesta has raised large sums for Hillary’s campaign while his firm lobbied for Wall Street firm, Credit Suisse, and Wall Street’s self-regulatory body that runs the industry’s private justice system – the Financial Industry Regulatory Authority (FINRA).

The Federal Election Commission filing for the final quarter of 2015 is not yet available, but as of September 30 of last year, Hillary had over 40 Federally registered lobbyists raising funds for her campaign.

But that does not even capture the full picture. According to Politico, Hillary has many more “professional influencers” raising money for her campaign who are not registered as Federal lobbyists. One of those is “Karen Persichilli Keogh, a former Clinton aide who has also lobbied for JPMorgan at the state and city level,” according to Politico.

Then there is the obscene lifetime support that Wall Street has injected into keeping Hillary Clinton in Washington. According to the Center for Responsive Politics, among the top five largest lifetime donors to Hillary’s campaigns, four of the firms are mega Wall Street banks: Citigroup tops the list at $824,402 with Goldman Sachs next at $760,740. Fourth and fifth on the list is JPMorgan Chase at $696,456 and Morgan Stanley at $636,564. (The monies come from employees and/or family members or PACs of the firms, not the corporation itself.) It is noteworthy that each of these Wall Street firms also rank in the top five firms holding trillions of dollars in derivatives which have yet to be adequately regulated.

Hillary Clinton has been bragging on the campaign trail about two hedge funds running ads against her, suggesting that hedge funds fear a Hillary presidency. What the candidate does not say is that large private equity and hedge funds have pumped millions into her current campaign. Among the top givers are: Saban Capital Group at over $2 million; Soros Fund Management at over $1 million; Paloma Partners at over $1 million; D.E. Shaw Research at over $800,000; and Medley Partners at $500,000.

Hedge funds and private equity firms do not want to lose their obscene tax perk called “carried interest” which allows them to pay taxes at a lower rate than nurses and plumbers.

Hillary is not just wallowing in campaign money from lobbyists, but she has also hired corporate lobbyists as part of her campaign staff. According to Patrick Caldwell, writing for Mother Jones, one of those is Jeffery Berman:

“Clinton recently hired Berman, Barack Obama’s 2008 delegate guru, to run the math for her primary campaign, just in case Bernie Sanders does end up challenging her in the contest for delegates. Berman brings expertise on the byzantine rules of caucus delegate counting, but he’s also known as a prominent lobbyist for a project fiercely opposed by environmentalists: the Keystone pipeline.

“Hillary Clinton has hired a former lobbyist for the company behind the Keystone XL pipeline,” The New Republic‘s Rebecca Leber wrote last month, ‘further upsetting environmentalists who have long been wary of her commitment to fighting climate change.’ As the Huffington Post noted, the firm Berman worked for, Bryan Cave, received $980,000 from TransCanada for lobbying work from 2009 to 2011. Berman was part of the team lobbying for the pipeline, and TransCanada paid hundreds of thousands of dollars for his share of the work.

“Berman worked for a host of other corporate clients during his years at Bryan Cave, which he left earlier this year to set up his own public affairs shop. According to the Senate’s lobbying disclosure database, Berman influence-peddled for SeaWorld, Gogo (the inflight wifi company formerly known as Aircell), the GEO Group (America’s second-largest private prison corporation), and FedEx.”

If one puts this corporate money machine in the context of how Wall Street gutted six-decade old investor protection legislation under the presidency of Bill Clinton, leading to the greatest financial crash since the Great Depression in 2008, it’s clear why Hillary Clinton is calling only for baby steps in reforming Wall Street while Senator Bernie Sanders is calling for a political revolution and the restoration of the Glass-Steagall Act.

Incremental change like Hillary Clinton has in mind will not upset her corporate donors but it will devastate what is left of America, accelerating the already unprecedented levels of wealth and income inequality.

It took the regulatory and social programs of Franklin Delano Roosevelt to save the country (and Wall Street from itself) following the 1929 crash and it will take the kind of political upheaval that Senator Bernie Sanders has in mind to rebalance wealth, income and political power in America. Baby steps simply will not get the job done.

Hillary’s Wizard of Oz balancing act, asking Americans to trust her at her word and not pull back the curtain on her corporate money conflicts, stands in stark contrast to Senator Sanders’ refusal to take PAC money. Her sagging momentum in the polls may reflect this reality.