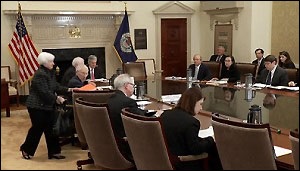 Fed Chair Janet Yellen Takes Her Seat at an Open Meeting of the Federal Reserve Board of Governors on November 30, 2015 to Vote on a New Bailout Rule

Yesterday, the Federal Reserve Board of Governors voted 5-0 to approve a new rule that was required under the 2010 Dodd-Frank financial reform legislation to rein in the type of vast, secret, and below-market-rate lending the Fed engaged in during the 2007 to 2010 financial crisis.

But rather than rein in its hubris, the Fed seems to have gone out of its way to emphasize that it has the power to make loans to “persons,” not just financial firms whose illiquidity might pose a threat to the nation’s overall financial stability.

Most Americans understand that the U.S. is experiencing unprecedented wealth inequality and that there are many billionaires in the U.S. whose net worth exceeds that of many regional banks (think Koch brothers or the Walton family behind Walmart). But if individual “persons” should get in a financial bind, is it really the job of the Federal Reserve to put taxpayers at risk with emergency bailouts?

We seem to have devolved from a central bank whose job it was to set monetary policy to a central bank with added supervisory oversight of Wall Street banks, vast emergency lending powers, a whopping balance sheet of its own of over $4 trillion and now it’s adding carefully crafted language to its rules that make it perfectly legal for the Fed to make loans with no set dollar limits to “persons.”

The summary of the new rule that the Fed placed in the Federal Register repeatedly makes reference to its ability to lend to persons. For example, one section reads:

Footnote 11 adds even more bizarre language from the Fed:

To further underscore that both financial firms and persons are eligible for loans from the Fed in an emergency, Section 201.4(d)(5) is explained as follows by the Fed in the Federal Register summary:

Has this language been added because some major Wall Street brokerage firms were put at financial risk by bets gone bad from some of their largest customers? Did these firms borrow from the Fed and then pass these loans along to insolvent customers?

There has long been unanswered questions as to why Citigroup, Merrill Lynch and Morgan Stanley commanded $6 trillion cumulatively in below-market-rate revolving loans from the Fed during the financial crisis. (At the time, all three had giant stock brokerage operations for retail and institutional customers. Were some of their largest trading accounts in trouble? If so, is it really the job of the U.S. central bank to bail out brokerage customers?)

On March 3 of this year, Senator Elizabeth Warren noted the following during a Senate Banking Committee hearing:

If the intent of Congress is to rein in the unbridled powers of the Federal Reserve, this new rule would appear to be going in the wrong direction.