Is the DNC Throwing Up Roadblocks to Bernie Sanders’ Campaign? 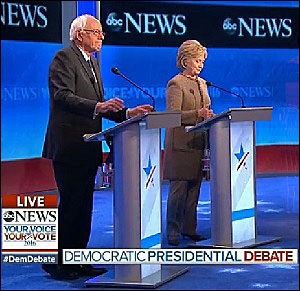 According to a Rasmussen national telephone survey during the week ending December 10, only 24 percent of likely U.S. voters think the country is heading in the right direction. Tens of millions of Americans believe that they can’t put a person in the White House or in Congress who shares their core principles because the system is rigged in favor of powerful moneyed interests.

Against that backdrop, with a continuance of the Clinton Dynasty and the Wall Street power players looking ever more likely to dominate in the 2016 Presidential election, along comes an astounding story of how the Democratic National Committee (DNC) handles critical voter information for competing Democratic Presidential campaigns.

Let that sink in for a moment.  A Presidential candidate like Senator Bernie Sanders who is asking the American people to engage in a political revolution to meaningfully change the status quo, is dependent on the Democratic voter database of a centrally organized body, the DNC, which is using an outside vendor that has, on multiple occasions, allowed competing Presidential primary campaigns to see the confidential data of the other side.

The most recent blowup became public late last week when the Hillary Clinton campaign, and the DNC, blasted Bernie Sanders’ campaign for an effort to “steal” Clinton data during a bug in the software of an outside vendor to the DNC, a company called NGP-Van. The DNC took the contractually unlawful step of blocking the Sanders’ campaign from continuing to use their critical database, according to a Federal lawsuit filed by the Sanders’ campaign.

Of note, Nathaniel Pearlman, the founder of NGP Software, which later merged with Voter Action Network to become NGP-Van, was Chief Technology Officer for Hillary Clinton’s 2008 Presidential primary bid against Barack Obama. According to the lawsuit filed by the Sanders’ campaign on Friday, during the 2008 primary campaign between Clinton and Obama, “a similar security incident arose with the NGP VAN software” with the outcome that confidential information from the Obama campaign was transmitted to Clinton’s campaign.

The Clinton campaign was not blocked from the DNC database in 2008 unlike the recent treatment of Sanders.

Adding to growing suspicions that the DNC is overtly placing its finger on the scale to help the Clinton campaign, fueled by the DNC’s bizarre Democratic debate scheduling during periods of low viewership (Saturday nights and a week before Christmas), which limits Sanders’ exposure to a broader base of potential voters, Sanders made a striking revelation at the outset of the Democratic debate this past Saturday evening.

When asked by debate co-moderator David Muir to explain the DNC data controversy, Sanders revealed that two similar breeches had occurred two months ago, where the vendor had placed Clinton’s confidential information on the Sanders’ campaign computers. At that time, the Sanders’ campaign quietly notified the DNC. This is how Sanders explained the matter at Saturday night’s debate:

SANDERS: “David, let me give you a little bit of background here. The DNC has hired vendors. On two occasions, there were breeches in information two months ago. Our staff found information on our computers from the Clinton campaign. And when our staffers said, ‘whoa, what’s going here?’ They went to the DNC quietly.

“They went to the vendor and said, ‘hey, something is wrong,’ and that was quietly dealt with. None of that information was looked at. Our staffer at that point did exactly the right thing.

“Thirdly, what I have a really problem, and as you mentioned, this is a problem, I recognize it as a problem. But what the DNC did arbitrarily without discussing it with us is shut off our access to our information crippling our campaign. That is an egregious act. I’m glad that late last night, that was resolved.”

Sanders added that he wanted to see an independent investigation because “I am not convinced that information from our campaign may not have ended up in her campaign. Don’t know that.”

In fact, the lawsuit filed by the Sanders campaign in U.S. District Court in Washington, D.C. appears to imply that the Clinton camp did indeed gain access to his confidential information, stating the following:

“On the morning of December 16, 2015, NGP VAN released a modification (the Release’) to the software that the Campaign and other candidates use to access Voter Data.

“This Release contained a critical security flaw (the ‘Bug’) that allowed the Campaign and other presidential candidates to view Confidential Information disclosed by competing campaigns.”

This points to another serious flaw in the logistics surrounding Americans’ inability to take back their country: when a system has repeatedly demonstrated its ability to reveal confidential data, why is the Sanders’ campaign placing its own confidential campaign data into that leaky data system. Thinking that the Clinton campaign is not the enemy in this primary is naïve at best by the Sanders’ campaign and, at worst, fatal to his election.

This is, after all, Hillary Clinton, who has a serial habit of playing fast and loose with the rules.

The verbal attacks on the Sanders’ campaign by the DNC and Clinton campaign also had suspicious timing. Sanders had just received his biggest endorsement from the Communications Workers of America, a 700,000 strong union. Sanders also received a striking endorsement last Thursday from Democracy for America, a grassroots political organization which announced on its web site that “with 271,527 votes cast — and all three presidential candidates campaigning directly for your vote — the results are in and they are extraordinary. Bernie Sanders has earned Democracy for America’s endorsement in the 2016 Democratic Party presidential primary with an astonishing, record-breaking 87.9% of the vote.”

To round out the week, the Sanders campaign said it was celebrating an historic milestone, topping more than 2 million contributions to his campaign. All of this had to be causing the Clinton camp some serious angst in terms of Sanders’ momentum.

The mainstream media has been quick to drop this story now that the DNC has reinstated the Sanders campaign’s ability to access the database. But this should be just the beginning of the search for answers by the American people. If we can’t bust out of the establishment candidate’s stranglehold on the Oval Office, should we really be placing our trust in the establishment’s stranglehold on critical voter data?